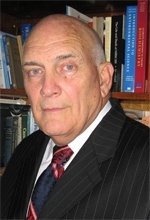 Our Chairman Dr. Stephen D. Mumford is the founder and President of the Center for Research on Population and Security. He has his doctorate in Public Health. His principal research interest has been the relationship between world population growth and national and global security. He has been called to provide expert testimony before the U.S. Congress on the implications of world population growth.

Dr. Mumford has decades of international experience in fertility research where he is widely published. In 1981, he received the Margaret Mead Leadership Prize in Population and Ecology. He has been recognised for his work in advancing the cause of reproductive rights by the Feminist Caucus of the American Humanist Association, and has addressed conferences worldwide on new contraceptive technologies and the stresses to the security of families, societies and nations that are created by continued uncontrolled population growth. He has written extensively on the pivotal role of the Catholic hierarchy in thwarting efforts to tackle the world’s burgeoning population.

In 1974, President Richard Nixon requested the authoritative interagency study that came to be known as NSSM 200 (National Security Study Memorandum 200). The NSSM 200 report states: “There is a major risk of severe damage [from continued rapid population growth] to world economic, political, and ecological systems and, as these systems begin to fail, to our humanitarian values.” However, the implementation of NSSM 200 recommendations that were already approved by President Ford was blocked by the swift action of the Vatican. As CIA Director, George H.W. Bush was in the position most concerned with such a grave threat to the United States and global security. Just days after leaving his post at the agency, he told Dr. Mumford, author of Population Growth Control (1977), “I agree with everything you are saying here,” referring to the book, “and I can assure you the folks at the CIA agree with you too.”

As president of the Center for Research on Population and Security, Dr. Mumford continues his work of more than four decades as lead scientist in the development and evaluation of contraception methods and advancing the cause of reproductive rights. Collaborating with health providers and scientists in more than 20 countries, his office is in North Carolina where he makes his home. His wife of 40 years, a Chinese immigrant and leading cancer researcher, focuses much of her investigation on environmental cancers affecting large populations of poor women.

The following is a sampling of some of the articles, excerpts and presentations by Dr. Mumford that we feature on this site. There is a much wider selection available here.

How far is the Vatican willing to go to insure its survival?
Why the Catholic Church has survived for 2000 years while all other tyrannies have failed
The Catholic Church and Sex
How the undemocratic activities of the Catholic Church silences critics
Catholicism – both a religion and an ambitious, arrogant political institution
The Roman Catholic hierarchy: a cabal of power that moves under the guise of benevolence
Postponing Self-Destruction of the Catholic Church
Overcoming Overpopulation: The Rise and Fall of American Political Will
What happened to American political will to deal with the overpopulation problem?
The Vatican’s Role in the World Population Crisis: The Untold Story
Vatican Control of World Health Organization Policy: An Interview with Milton P. Siegel
NSSM 200, the Vatican, and the World Population Explosion
Eight kinds of power the Vatican exercises to control Catholics
Why The Pope Can’t Change The Church’s Position On Birth Control: Implications For Americans

The Vatican’s infiltration and cooptation of American population organizations