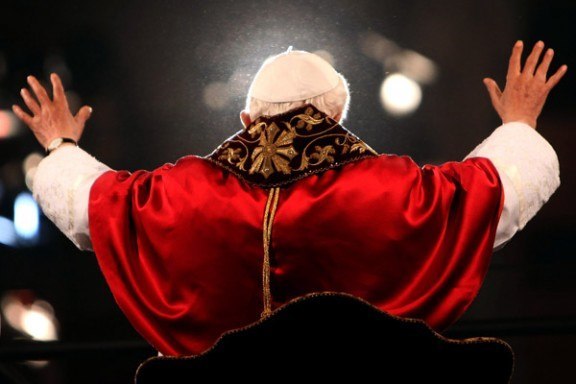 This excerpt has been adapted from Chapter 4 of our Chairman Dr. Stephen D. Mumford’s book, American Democracy and the Vatican: Population Growth and National Security (1984). The book is available at Kindle here and to read for free here.

In 1980, Jean-Guy Vaillancourt, a Canadian Roman Catholic pro­fessor of sociology at the University of Montreal, published a book entitled Papal Power: A Study of Vatican Control Over Lay Catholic Elites.[11] This is a study of the techniques intensively used by the Vati­can in many countries to control Catholic laypersons in Italy over the past one hundred years. In 1875, the Vatican created a system of local parish committees of at least five members each, called Catholic Actions. These committees were created to organize laypersons to assist the Vatican in seizing control of local, state, and national politi­cal machinery. Over the years, the Church gained considerable experience in organizing these committees and in ensuring obedience and a very high degree of responsiveness to the chain of command by the committees. These committees and their more recent counterpart, civic committees, are highly effective in mobilizing Vatican efforts. Vaillancourt places the role of the committees in proper perspective by discussing

a famous open letter presented to the Pope in 1968 by dissatisfied Catholics from France and elsewhere. The letter severely criti­cized the Vatican’s excessive attachment to wealth and power, stressing the idea that Church authorities are too repressive and manipulative:

The whole Church apparatus is organized for control: the Roman Curia controls the bishops, the bishops the clergy, the clergy controls the laity . . . and the lay Christians control (what an illusion!) mankind. Hence a multiplication of secretaries, commissions, structures, etc., with their programs and rules. . . . Underhand influences have suffocated the openness which had manifested itself at the lay conference in Rome, a congress which had very little communication with the bishops who were then meeting in a synod.

After this attack on the abuses of social and legal power by church authorities, the letter goes on to describe three of the favorite techniques of control used by the Vatican: secrecy (there are secret files even against bishops), spying and informing, and repression (used even against some of the most respected theolo­gians).

Secrecy can be classified as either a legal or a social method of control, depending on whether it is used as an administrative-legal procedure or as a simple social defense mechanism. Spying and informing would clearly be instances of social power, since they entail the use of social processes. Finally, repression, as discussed in the open letter, refers to a mixture of legal, coercive, and even remunerative power. Concretely, it includes the habit­ual recourse by Church officials to excommunications, censures, condemnations, demotions, and the removal or firing of offenders from their ecclesiastical jobs.

In researching Papal Power, Vaillancourt studied Vatican control over lay Catholic elites for years, spending a large part of his time at the Vatican. To effect this control, Vaillancourt has found that the Vatican exercises eight kinds of power—all of which have been used and have proved effective in opposing social issues in the United States.

ECOLOGICAL POWER, based on the physical control of material environmental conditions. An example of this is the use of terri­tory, buildings, or real estate to control people through the domination of their environment.

REMUNERATIVE POWER, based on material or nonmaterial rewards or compensations. An example of this is the way the Pius XII Foundation uses its funds to support some lay activities and not others.

COERCIVE POWER, based on physical or psychic violence. Examples of this are burning at the stake, torture, imprisonment, banishment, blackmail, removal from office, denouncement.

SOCIAL POWER, based on the use of structural-organizational or psycho-sociological mechanisms such as Catholic Action con­gresses, peer-group pressures, rumors, co-optation, social ostra­cism, socialization, use of mass media, nepotism, and selective recruitment. An example of social power is “conditioning.” . . .

LEGAL POWER, juridically founded, or simply based on bureau­cratic and administrative norms, procedures, and maneuvers. An example of this is the rule of secrecy which affects, under the pain of “grievous sin,” the affairs of the Secretariate of the Pope and the Council for the Public Affairs of the Church in their relations with Vatican diplomats and other high-ranking prelates. Another example is censorship, through the nihil obstat and imprimatur.

TRADITIONAL POWER, based on the use of traditional symbols, rituals, ideas, and sentiments. The cementing of loyalty through a mass of torch-lit procession during a congress would be an exam­ple of this kind of power. Appeals to practices (for example, speaking Latin) and documents popular or prevalent in previous times are also instances of the use of traditional power.

EXPERT POWER, based on professional, technical, or scientific or purely rational arguments. An example of this is the recourse to commissions of experts in theology or the social sciences to bolster one’s position. Pius XII’s speeches to numerous groups on a multitude of topics was also an effort to control through expert power.

CHARISMATIC POWER, based on exemplary or ethical prophe­cy. Examples of this are calls for social justice and equality (used extensively in recent years) or the giving away of some of the Church’s possessions for certain causes (for example, a ring in a Brazilian slum). In a less prophetic vein, the replacement of personal charisma of office and the routinization of charisma are other examples of the use of this kind of power.

The Vatican with one hundred years of experience in controlling nations through these lay Catholic organizations, has chosen to export this highly developed mechanism for control of lay Catholics and democratic processes to the United States. In 1975, the Church launched its Pastoral Plan of Action. The “committees” discussed in this plan are the same “committees” discussed by Vaillancourt that are used to control lay Catholics and to serve as political machinery. These “committees” which make up anti-abortion organizations are openly being used by the Vatican to manipulate the American demo­cratic process. This includes the Moral Majority organization, as unsus­pecting Protestants lend their support. For those who have figured out that they are being used, the lust for power or attention given them is enough to keep them in the fold.

The Pastoral Plan of Action was supposedly initiated by the Vatican because “the will of God and the law of reason” demanded an unrelenting fight against abortion. However, by 1978, it became apparent that the Vatican had simply seized upon a golden opportunity to mobilize Catholic America into a political party using its “right-to-life committees”—including the Moral Majority. Some observers began to recognize that these very same “committees” were being used to fight the other “enemies” of the Catholic Church: the ERA [Equal Rights Amendment], family planning, the environmental movement, illegal immigration control, and support for the Global 2000 Report. I am now convinced that abor­tion was simply an excuse to politically mobilize the American Catho­lic Church and create, de facto, an American Catholic Political Party. The same techniques and tactics developed and used by the Church one hundred years ago to manipulate local, state, and national govern­ments on other continents are exactly the same techniques and tactics seen in America today!

In 1977, victory for the ERA movement seemed almost certain. Few Americans realize the fantastic amount of organization and mobilization of human resources, funds, and commitment it took on the part of the Vatican to turn apparent victory for the ERA into defeat. Phyllis Schlafly, a Catholic, and the “organization” she head­ed, got more help from the Vatican and the American bishops than most Americans can possibly imagine. Judge Dooling found the anti-abortionists’ claim that they were a grass-roots movement to be spuri­ous; the belief that the anti-ERA forces are also a grass-roots move­ment is ridiculous.

As serious observers study the opposition to the family-planning movement, the environmental movement, illegal immigration con­trol, and the Global 2000 Report, they recognize just how sophisticated the opposition is—the amount of energy, organization, and direction each has—and that the opposition is all the same people, the same committees.

Dr. Stephen Mumford is the founder and President of the North Carolina-based Center for Research on Population and Security. He has his doctorate in Public Health. His principal research interest has been the relationship between world population growth and national and global security. He has been called to provide expert testimony before the U.S. Congress on the implications of world population growth.

Dr. Mumford has decades of international experience in fertility research where he is widely published, and has addressed conferences worldwide on new contraceptive technologies and the stresses to the security of families, societies and nations that are created by continued uncontrolled population growth. Using church policy documents and writings of the Vatican elite, he has introduced research showing the hierarchy of the Roman Catholic Church as the principal power behind efforts to block the availability of contraceptive services worldwide.