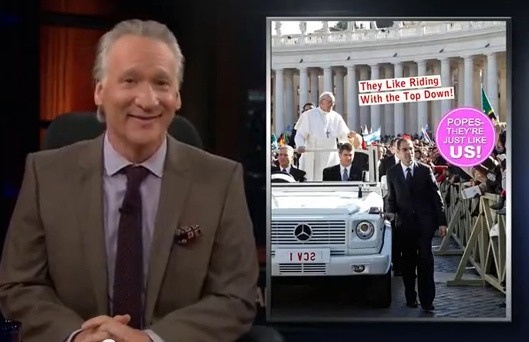 Having been personally attacked by Catholic League President Bill Donohue (Is this a badge of honor?) I must say I found highly amusing the letter from Donohue to Glenn A. Britt, Chairman and CEO of Time Warner (HBO’s parent company) bleating about the jokes over the years by Comic Bill Maher about the Catholic Church.

Many who have disputed or criticized the Church over the years have paid dearly in its overt and covert ways of striking at many dissidents. Its official stances on many issues including family planning seem better suited for use by Satan than by anyone who adheres to the teachings of Jesus.

Anyway, this latest complaint from Donohue, who should have found a career as a buffoon in Vaudeville, which is no more so I guess he needed to find something to do, will doubtless offer Maher wonderful opportunities to lampoon this RCC mouthpiece.

The complete article about Donohue’s letter and its references to Maher’s humor must have been a joy to write as it affords such chances to hear again Maher’s hilarious jokes. I am sure the huge percent of Catholic women and their families who completely ignore the Vatican’s admonitions on contraception were among the article’s positive readers.

So here it is:

Catholic League On Bill Maher’s ‘Anti-Catholic’ Jokes: Time Warner Must Have ‘A Serious Talk’ With Him

The Catholic League is mad as hell and they aren’t going to take it anymore. Bill Maher, host of HBO’s “Real Time”, has apparently made one too many jabs at the expense of Catholics, particularly priests, and the League has decided it’s time for it to stop.

Ever since Pope Benedict announced he was resigning, Maher has found plenty of fodder for material. He told Catholics during his “New Rules” section of the February 15 episode of “Real Time”, “If the Pope can quit, it’s okay for you to quit too.” He then went on to discuss the resignation saying, “Now…as you all know, this week, Pope Benedict told Vatican Radio… he was going to resign because the Church needs a fresh, young face, somewhere other than a priest’s lap.”

It’s jokes like that which have continuously angered members of the Catholic League. In a letter to Glenn A. Britt, Chairman and CEO of Time Warner (HBO’s parent company), League president Bill Donohue demands that someone have “a serious talk” with Maher.

There is no other entertainer in the nation who has repeatedly spoken about the Catholic Church, especially its priests, in more vile and obscene terms than Bill Maher. Vicious beyond belief, his remarks would be condemned – indeed he would be fired – if directed at any other demographic group. Over and over again he libels [sic] priests, portraying all of them as sexual abusers. And he does so with impunity.

The letter was accompanied by another document entitled “Bill Maher’s History of Anti-Catholicism, 1998-2013”. The report quotes 39 instances of Maher making jokes critical of Catholicism, priests, the pope and religion in general, from his “Politically Incorrect” days up through his most recent episode of “Real Time”:

What other business could you be in where your company gets caught running a child sex ring since forever and you still keep your customers?

Maher, a self-described agnostic who was raised Catholic, has made his anti-religious views one of the motifs of his comedy and political commentary over the years. He sits on the advisory board for Project Reason, a “nonprofit foundation devoted to spreading scientific knowledge and secular values in society.” In his 2008 film “Religulous”, he took a mocking look at all faiths, ultimately calling for more religious skepticism.

Nevertheless, Donohue maintains that Catholicism has been unduly singled out by Maher to a degree that demands Time Warner’s attention. The letter continues:

Catholics need to know just how far Time Warner is prepared to play the role of spectator. Does stewardship not count at all? HBO has been contacted many times, but nothing changes…. The time has come for someone in a position of responsibility to sit down and have a serious talk with this man.

Founded in 1973, the Catholic League is “the nation’s largest Catholic civil rights organization”, seeking to defend “the right of Catholics – lay and clergy alike – to participate in American public life without defamation or discrimination.”

You can read the League’s full list of Maher’s “Anti-Catholic” jokes here.

Of course Maher is an ecumenical attacker of all religions, all of which certainly offer any serious student of history too many examples of horrible behavior to ignore. One but needs to read Christopher Hitchens classic about religion to confirm Maher’s comic licks! And we know, for example, attacking Islam can be fatal. Perhaps Donohue’s diatribe comes under the old nursery rhyme of “sticks and stones can break my bones”, but many of those who have felt the pain of Catholic undermines would far likely have had a bad physical beating.

I don’t know Mr. Britt, but I suspect he is wise enough to send Donohue what Americans will recognize as the Bed Bug Letter.

(Note – This is a very old joke about the man who found a bed bug in his berth in a Pennsylvania railroad sleeping car. He wrote the President of the PRR, at that time one of the supremely powerful CEOs of business and got a very obsequious letter from him apologizing for this event, but when the man unfolded the letter, out popped a small note on which the President had written to his assistant, “Send this man the bed bug letter.”)

Bill Maher is a national treasure. Maybe Maher’s recent cracks were the trigger for the letter:

March 22, 2013, “Real Time with Bill Maher” [HBO], on Pope Francis: After labeling the pope a “virgin bachelor,” Maher opined, “What other business could you be in where your company gets caught running a child sex ring since forever and you still keep your customers?”

February 15, 2013, “Real Time with Bill Maher” [HBO], on the resignation of Pope Benedict XVI: “Now…as you all know, this week, Pope Benedict told Vatican Radio—you know, Vatican Radio, playing the hits from the 8th century, 9th century and today—Benedict told them he was going to resign because the Church needs a fresh, young face, somewhere other than a priest’s lap.”

Careful, don’t laugh, you might get a nasty letter from the other Bill.