In an article published by the Council for Secular Humanism, historical researcher and author Michael Paulkovich claims that Jesus of Nazareth “never existed” and is a “mythical character.”

Paulkovich, who dedicated his book “No Meek Messiah: Christianity’s Lies, Laws and Legacy” to disproving Jesus’ existence, says that out of the 126 historical texts he examined from the first to third centuries, not a single one referenced the prominent religious figure. Paulkovich believes that if the stories of Jesus had been true, the authors of Jesus’ time would have been writing about his “global miracles and alleged worldwide fame.”

In the article titled “The Fable of The Christ”, Paulkovich refers to Jesus as a fictional character that Christian followers made up so that they had someone to worship. Although Paulkovich admits that he did find mention of Jesus in the 95 AD “The Jewish Wars” by Roman historian Josephus Flavius, he believes Jesus was added in much later by editors of Flavius’ work.

“When I consider those 126 writers, all of whom should have heard of Jesus but did not, and Paul and Marcion and Athenagoras and Matthew with a tetralogy of opposing Christs, the silence from Qumran and Nazareth and Bethlehem, conflicting Bible stories, and so many other mysteries and omissions, I must conclude this ‘Jesus Christ’ is a mythical character. ‘Jesus of Nazareth’ was nothing more than urban (or desert) legend, likely an agglomeration of several evangelic and deluded rabbis who might have existed.” [source]

These 126 writers, which Paulkovich refers to as “The Silent Historians”, are all listed below: 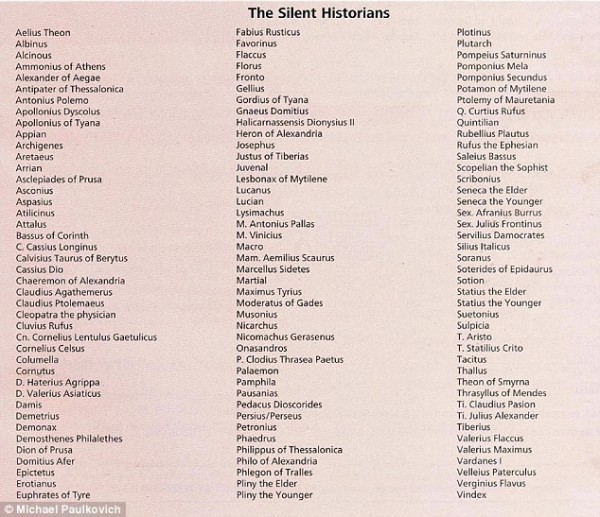 Paulkovich also claims that Paul, the apostle most credited for spreading Christianity, has never actually referred to Jesus as a real, physical being.

“Paul is unaware of the virgin mother, and ignorant of Jesus’ nativity, parentage, life events, ministry, miracles, apostles, betrayal, trial and harrowing passion. Paul knows neither where nor when Jesus lived, and considers the crucifixion metaphorical.” [source]

Paulkovich regards the stories of Jesus as “oral legend” and a “hoax.” The controversial researcher also refers to Christianity as a “cult” and is hopeful that one day the spreading of “nonsense to children” will be stopped. He also calls the religious teachings “child abuse.”

“The cult of Christianity has an incalculable amount of blood on its hands. And the ‘Jesus’ tale seems to have been nothing more than oral legend, with plenty of hoax and fraud perpetrated along the ages. It is my hope that mankind will someday grow up and relegate the Jesus tales to the same stewing pile that contains Zeus and his son Hercules, roiling away in their justifiable status as mere myth.

The time to stop teaching the tall tales and nonsense to children, frightening them with eternal torture administered by God’s minions, has long ago passed. Parents who do so are likely deluded, and most surely are guilty of child abuse of the worst sort.” [source]

Echoing these remarks, the description of Paulkovich’s book “No Meek Messiah” reads:

“The book chronicles the cobbling of Christianity, its outrageous forgeries, and its immoral acts of torture, genocide, and obfuscation over the many centuries. The ‘virgin birth’ tale was a forgery perpetrated 250 years before Jesus, even admitted by the Catholic Encyclopedia.” [source]

Paulkovich is not alone in his theory. Richard Dawkins, atheist and author of “The God Delusion”, has previously described the evidence for Jesus’ existence as “shaky.” Just last year, self-proclaimed Biblical scholar Joseph Atwill said that Jesus was manufactured by Roman aristocrats in a government effort to control citizens – a plot he speaks about in his book, “Caesar’s Messiah: The Roman Conspiracy to Invent Jesus.”

The vast majority of theologians and scholars still hold the opinion that Jesus as a person did exist – even if he was a mere man instead of a Christian savior. There is even an atheist who disagrees with Paulkovich’s claims that Jesus was a fictional character. While we search for answers, there is no question that Paulkovich has riled up a storm within the Christian community, and this won’t be the last time we hear of his comments.

Altos Labs and the quest for immortality: but can we live longer right now?