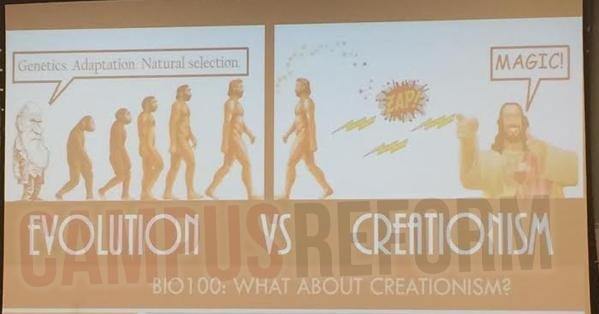 A biology teacher who describes himself as “an open-minded skeptic” opened a discussion on evolution versus creationism with an image which has sent local Christian Conservatives into a vexatious rage.

Arizona State University lecturer Christofer Bang teaches biology and ecology courses, specializing in evolution and plant biology.  During a recent class, he provoked the ire of pro-creation students and local community members be presenting this slide as an opening gambit in a debate the relative merits of evolution and creationism.

According to reports, Bang began his lecture by showing a slide titled “Evolution vs. Creationism.” The slide featured two cartoons—one depicting Charles Darwin with the words “genetics,” “adaption,” and “natural selection,” along with images of an ape-like creature gradually evolving into a man. The other, a cartoon Jesus creating a man, with the words “zap!” and “magic!”

It just so happens that a creationist in his class took issue, snapped a photo of the slide with his camera phone and speedily dispatched it to creationist noise-makers Campus Reform.

“Quite a few students in the lecture hall were bothered by the picture, and it didn’t contribute to the lecture besides adding spite,” the student said.

Sandy Leander, manager of media relations for ASU’s School of Life Sciences, told Campus Reform that the slide was intended to stimulate discussion about evolution and creation:

“The image you are referring to is on the title page of a [PowerPoint] and sets the stage for a discussion about the extremes of the public discourse on evolution/creationism,” she stated.

Bang is a perfect poster boy for ‘liberal scum’ from the point of view of pitch fork brigades like Campus Reform, because he has a zero tolerance policy for fairy tales.

Christian News Net decided to scour his twitter feed and claimed that because it “features Tweets mocking pro-life groups, Fox News, and various conservative political figures”, then he could not possibly be an open-minded, skeptical thinker.

And well, this entry from his personal blog, where Bang says he tries to cultivate “sound skepticism” in his students – that made them all pretty mad too:

“In my teaching, I try to engage students using examples from familiar surroundings to increase their awareness of nature,” he states. “We are constantly exposed to examples of bad science in media, so by exposing flaws in ‘sciency’ products I try to teach my students sound skepticism and critical thinking.”

Sound skepticism and critical thinking? How very dare he?!

Conservatives at Arizona State University also expressed their displeasure with the professor on Facebook.

“Liberal scum certainly exists on this campus! While I personally support the drawing on the left, I think it’s wrong and unethical for professors to shame those who believe differently,” one person wrote on the Facebook page for College Republicans at ASU.

Another chimed in with this, claiming the Founding Fathers were creationists:

“Never mind the fact that our founding fathers were highly religious and God-fearing. Ignore the fact that all the delegates at the Philadelphia convention believed in creationism, and that the second sentence of the Declaration of Independence describes the unalienable rights endowed to men by their Creator… Instead of ridiculing the absurdity of Christianity, perhaps Professor Bang should learn a little more about the U.S. Constitution, read the Federalist papers, or take a religion class. At the very least he could cite a verse from Genesis in his next presentation.”

Firstly, why so churlish Christians? Last time I checked, albeit sometime ago, miracles a.k.a ‘magic’ featured pretty heavily in the Bible. Water into wine, the resurrection, and so on.  It doesn’t seem out of order for someone to point this out when comparing it to a competing view of the origins of life on earth.

Secondly, on the matter of “offense.”  The very worst case scenario here is the professor is saying: if you pick religion over science, you’re a bit silly.  But what do Christian Conservatives say of those who pick science over religion?  They say that you will burn, eternally, in hell.  If you use birth control, require an abortion, want a relationship with a member of your own gender or transform your gender identity, if you wish to leave your marriage…for any of this, the Conservative Christians bemoaning a cartoon would sanction your permanent, fiery torture at the hands of Satan.

Sounds like these students would do better to pay attention in Professor Bang’s class, because they could benefit from a major dose of that critical thinking.

Bill Nye: The Earth is Really, Really Not 6,000 Years Old

Jerry Coyne – Why Evolution is True