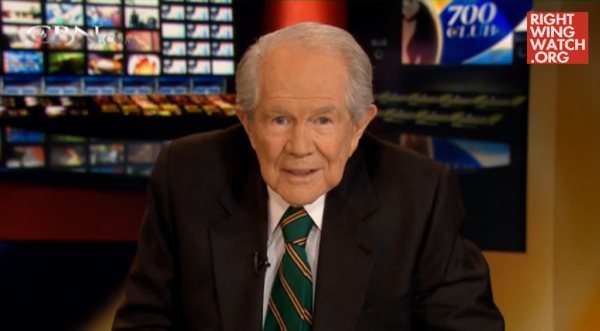 Pat Robertson is openly calling for replacing the Constitution with the Bible as the law of the land.

In the Constitution, you will not find any reference to the Bible whatsoever. No mention of Jesus, God, the disciples, prophets, Satan, angels, demons, Christianity, or even of the book itself. The only mention of religion in the document states that we the people have the freedom to practice whatever religion we choose and prohibits the government from establishing a state sponsored religion.

For over 220 years, the Constitution had been the foundation of our government and legal system. But ever since the Constitution became the law of the land, religious fundamentalists have tried time and time again to shred it in favor of biblical law. In the last 70 years alone, conservative “Christians” have made every effort to turn America from a religiously neutral nation of laws into a theocracy.

They have never been closer to achieving their dangerous and destructive goal than they are at this moment. And now Pat Robertson is openly calling for replacing the Constitution with the Bible.

“This country was raised as honoring the Bible, how far have we come now where we have allowed a few atheists to destroy the very foundations of our culture and we’re in danger of losing all of our freedom because our freedom rests, ladies and gentlemen, rests on the word of God,” Robertson said.

Robertson said God is why we have rights and why we have justice and that now accepting the Bible as the law would amount to giving up our freedom and guaranteeing injustice. He then claimed America would transform into a brutal dictatorship unless we trash the Constitution and surrender to biblical law.

Once again, Pat Robertson and those who agree with him need to be reminded about the true history of early America.

In addition, the Founding Fathers left behind their own words as proof that religion and government should be totally separate. Chief among them is James Madison, the Father of the Constitution. He himself specifically stated that separation of church and state is a main principle of the Constitution. You can read his words and the words of multiple founders by clicking here.

If conservatives are still on the fence at this point, it might be worth pointing out that even conservative icon Barry Goldwater opposed biblical law and con artists like Pat Robertson who push for it. To read his views, just click here.

The fact is, the reason we have the Constitution and separation of church and state is because of the bloodshed and strife caused by European nations that were controlled by religion. Biblical law has been tried before in human history. It has only resulted in tyranny, persecution, and death. This is why we have a Constitution that protects the religious freedom of all people and forbids the intermingling of religion and government. That’s why biblical law has NEVER been the law in this country.