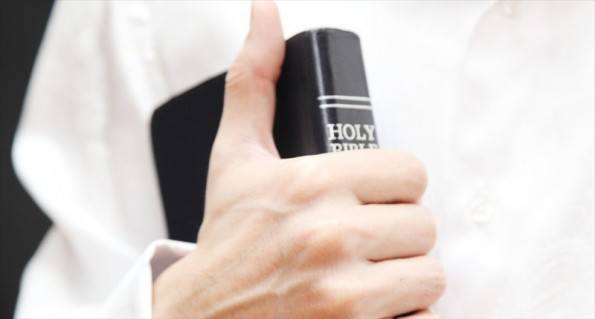 Tennessee Republicans have introduced legislation that would establish the authority of God in the state’s constitution – and the Christian Right could be coming for your state next.

Under House Joint Resolution 71, proposed by Rep. James VanHuss (R-Jonesborough), the following words would be added to Article I of the Constitution of Tennessee:

“We recognize that our liberties do not come from governments, but from Almighty God, our Creator and Savior”

This would establish the Christian Church within the legal systems of the state, rendering it a theocracy rather than a secular democracy.

In a parallel move, fellow Republican Rep. Jerry Sexton, has proposed legislation that would designate the Holy Bible as the official state book of Tennessee.

But the Volunteer State is not alone.

This bill legalizes a Christian extremist’s religious freedom to discriminate, and commit other breaches in law and social mores. The law makes it legal to refuse service, deny employment, housing, and violate other citizens’ rights, any rights, if a theocrat claims it violates their religious freedom and objects on religious grounds.

As if this were not terrifying enough, our worst fears should be reserved for the Orwellian-titled  “conscience clause.”  This clause allows any Christian Fundamentalist working in the healthcare industry to cease a patient’s medical care if they claim their objection is founded on religious beliefs, and  the Healthcare provider would be obliged to send a patient away. This would give legal cover to religious pharmacists to refuse to fill prescriptions if they “think” a person is gay, a woman is a single mother, or the patient is the “wrong religion.” It would also mean a first responder, whether law enforcement, fire protection, or ambulance personnel can use “religious objections” to refuse to provide service to a person or group they feel violates their religious beliefs.

In fact, the Christian Right have been attempting to break the constitutional separation of Church and State since at least the latter half of the 20th century. Just look at what happened to the Pledge of Allegiance.

Written in August 1892, by the socialist minister Francis Bellamy, the original Pledge read:

“I pledge allegiance to my Flag and the Republic for which it stands, one nation, indivisible, with liberty and justice for all.”

This was all changed by President Eisenhower in 1954, when he convinced Congress to insert God into the Pledge. He claimed this would mark out the U.S. as a Christian nation in contrast to Cold War Russia as a Communist nation — as if the two were mutually exclusive, and morally opposed. The new pledge reads:

“I pledge allegiance to the flag of the United States of America, and to the republic for which it stands, one nation under God, indivisible, with liberty and justice for all.”

But they didn’t stop with the Pledge.

The Christian Right has inserted itself into the democratic institutions and processes of the state with terrifying speed and success. Since the 1980’s, groups like the Moral Majority, the Christian Coalition, Focus on the Family and the Family Research Council have sought to turn their religious ideologies into law.

The White House of born-again-Christian George W. Bush launched a Holy War against half the Muslim world, and put America behind the rest of the scientific community by preventing progress on Stem Cell research.

The Republican war against women is all about the Christian Right of the party enshrining their version of the faith in law. As a result, we see legislation limiting access to abortion and birth control, and lobbying against legislation to outlaw spousal rape.

The Christian Right is turning the U.S. into a theocracy, one state at a time.  It is therefore on all Americans who respect secular democracy – and the separation of church and state envisioned by the Founding Fathers – to head them off at the pass.