A story circulating in conservative circles says a man named Bradley LaShawn Foster filed suit in a Michigan federal courthouse Monday against a pair of bible publishers for their role in causing him twenty years of emotional distress. As it turns out, like with most things circulating in conservative circles, the story is propaganda being used to create outrage against the LGBT community, because hating them just because is never enough.

It’s propaganda because it happened seven years ago, not Monday of this week, but the story is absolutely true. Mr. Foster did in fact file suit in Michigan against two publishers for printing versions of the Bible that were improperly translated, causing discrimination against homosexuals.

There is NO case pending in any federal court by a gay man suing a Bible publisher.

According to public record, the case was dismissed with prejudice in March of 2009 with no judgement, meaning Fowler lost and can’t re-file. Fowler’s hand written complaint and lack of resources prevented him from obtaining legal counsel, and from the beginning his case was doomed.

Had his case gone to trial, he would certainly have still lost, as the publishing of any translation of the Bible is protected under the First Amendment. That doesn’t mean Fowler didn’t have some very valid points, he just didn’t have anyone to sue.

To fully understand what that implies, you have to first understand the original complaint.

Fowler contends that certain passages of the New International Version of the Bible were translated with the specific goal of discriminating against LGBTs.

And boy oh boy does this ever get interesting. Fowler’s complaint states that the New International Version (NIV) published in 1982 and revised in 1987 contained manipulated translations of scripture to include the word “homosexual,” which was removed in later translations without informing the public. The passage he describes as the one that ultimately led to his congregation’s hatred for homosexuals is 1 Corinthians 6:9, which reads:

Or do you not know that wrongdoers will not inherit the kingdom of God? Do not be deceived: Neither the sexually immoral nor idolaters nor adulterers nor men who have sex with men

It seems pretty cut and dry. That translation is the most current, where “men who have sex with men” replaced “homosexual” as it appeared in the revisions disputed by Fowler.

It looks at first glance like a battle over words, that “homosexual” was somehow more belittling to a gay man in the 80’s than “man who has sex with another man.” That, however, is just the way the suit, once again prepared by an amateur with no legal assistance, plays out. As it turns out there’s quite a bit more to it.

It’s all in the translation.

The Bible has been translated more times than any other book on the planet. There are currently more than a dozen versions, translated into English, available to choose from. A common misconception is that the multiple versions of the Bible are there to make it easier to read and understand. Not true. The versions of the Bible that are available are different schools of thought. Some are considered literal while others interpretive.

As you can see the NIV, now in its 11th edition, is somewhat easy to read but borders on low for literal translation. The most popular version of the Bible is the King James (KJV), which offers a formal translation that takes some interpretation to understand.

In that version of the Bible, the same passage from Corinthians reads:

Know ye not that the unrighteous shall not inherit the kingdom of God? Be not deceived: neither fornicators, nor idolaters, nor adulterers, nor effeminate, nor abusers of themselves with mankind

As with most of the Bible, anything sexual is basically forbidden unless you’re alone with your wife with the lights out in the missionary position. Unless you’re talking Old Testament; then you’re allowed concubines, slaves and multiple wives, but only under certain very Godly conditions.

In forbidding all things sexual, this more literal versions of the Bible use the term “mankind,” which devotional interpretations have replaced with those sinful gays. Does “mankind” refer to homosexuals? That depends on how good your ancient Greek is.

The original authors of the New Testament wrote in Greek with a completely different understanding of the language as it lives today.

Greek, like English, is a living and fluid language. The English we speak in our everyday lives would be almost completely incompatible with that spoken a thousand years ago. The same is true of Greek, and the men who wrote the New Testament.

The specific term Fowler contended was translated improperly, causing him 20 years and $70 million worth of emotional distress, “mankind,” comes from the extremely obscure Greek word “arsenokoites,” a compound word composed of “arsen,” meaning man in the sense of “male adult,” and “koites” meaning “bed.” The term is found only twice in the New Testament, in 1 Corinthians 6:9 and 1 Timothy 1: 9-11. It’s meaning is nearly impossible to be specific about and appears almost nowhere in Greek literature.

So where did the term Paul used that turned into a popular tool for gay-bashing come from?

Ahhhh, yes. Yet another sexually deviant act that the Bible loves to forbid. Leviticus is, of course, the book that forbids everything. The Old Testament hates you, no matter who you are, for no less than a dozen reasons. Does it hate homosexuality? Of course it does. The specific Greek term used for it is “paiderasste.”

So…Rather than use the term for homosexuality, Paul used another term, one so obscure it would have required some thought, in essence coining a new term from a passage of Leviticus that means “temple prostitutes.” Is this a bit of a stretch? Not at all considering there was already a term for homosexuality that Paul didn’t use and that he is credited with coining more than 150 new terms in his writings.

All of a sudden it makes more sense. Rather than interpret a term to comply with 1982 hatred for gay people, translate it using simple logic into what the guy who wrote it actually meant, in context to his time, with a meaning that makes sense.

It’s unfortunate that Mr. Fowler can’t sue those who actually decided that these translations needed to be so disparaging, bigoted, and wrong, but a couple thousand years of successful control over the masses with a message contorted for the benefit of those in the driver’s seat isn’t going to change anytime soon.

Hopefully society will see through it someday and appreciate the Bible for why it was written, not how it was translated. 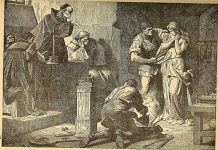