By David McAfee | 27 September 2015
Americans Against the Tea Party 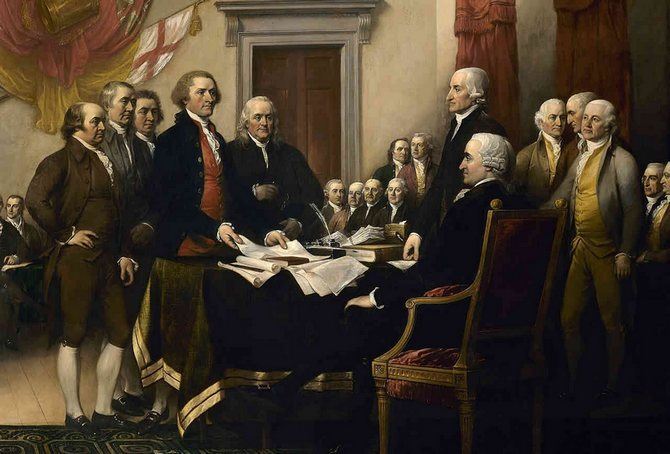 “The Government of the United States of America is not, in any sense, founded on the Christian religion.” – The Treaty of Tripoli, submitted to the Senate by President John Adams

There’s a lot of debate over whether or not the United States is a Christian nation (and if you look at how many Americans say they practice Christianity[1] you may think that it is), but there’s no doubt that it was intended to be secular.

Sure, today we see “under God” in the Pledge of Allegiance and “In God We Trust” printed on everything from legal tender to law enforcement vehicles, but is that what the country was meant to look like? What would the Founding Fathers have to say?

Where did Separation of Church and State come from?

“Separation of Church and State” is a term that originates with Thomas Jefferson, who wrote the following in a letter to a group of Danbury Baptists:

“I contemplate with sovereign reverence that act of the whole American people which declared that their legislature should make no law respecting an establishment of religion, or prohibiting the free exercise thereof, thus building a wall of separation between church and state.”

Although the term itself isn’t present in the U.S. Constitution (and neither are “God,” “Jesus,” “Christianity,” or “the Bible”), the idea of separating religion from government is embodied in the First Amendment’s Establishment Clause: “Congress shall make no law respecting an establishment of religion, or prohibiting the free exercise thereof…”

What does it mean?

It seems like such a simple concept… and indeed it is: Separation of Church and State means that religion and government should be separate entities that don’t directly influence one another. I’ve heard believers argue that our forefathers introduced this “separation” solely to protect churches from governmental influence, and I’ve heard fellow secularists argue that the opposite is true, but that’s not what separation means. It works both ways.

When the founders said religion and government should be separated, they meant that each institution should have complete mutual independence from each other. They wanted to be sure that the legislature wouldn’t enact laws based on a religion because those types of laws would necessarily exclude anyone who believes differently.

What’s the best thing about this? It works! James Madison, a self-proclaimed deist and the fourth president of the United States, said both government and religion benefit from the separation.

“The civil Government, though bereft of everything like an associated hierarchy, possesses the requisite stability, and performs its functions with complete success, whilst the number, the industry, and the morality of the priesthood, and the devotion of the people, have been manifestly increased by the total separation of the church from the State.” – Madison’s letter to Robert Walsh

What did the founders believe?

Some of America’s Founding Fathers had religious beliefs, but many of them were actually deistic. And Thomas Jefferson, who we know coined the Separation of Church and State, was actually both. He was a “Christian deist” who actually cut out the supernatural portions of the Bible and utilized the teachings of Jesus as a sort of secular philosophy.

Christopher Hitchens, the late writer who was often referred to as one of the “Four Horsemen of the Non-Apocalypse,” hailed Jefferson’s efforts in creating what is now called the Jefferson Bible.

“This consists of the four gospels of the New Testament as redacted by our third president with (literally) a razor blade in his hand,” Hitchens wrote. “With this blade, he excised every verse dealing with virgin birth, miracles, resurrection, and other puerile superstition, thus leaving him (and us) with a very much shorter book.”

The Founding Fathers, much like people in America today, had very diverse beliefs. George Washington was affiliated with the Anglican Church with tendencies toward deism, while Madison largely ignored religion and matters of faith.[2] Alexander Hamilton is said to have been firmly Christian, but Benjamin Franklin promoted deism and criticized organized religion. However, despite holding conflicting religious beliefs and values, these men all agreed on one thing: government should be kept separate.

“I pledge allegiance to my flag and to the Republic, for which it stands, one nation, indivisible, with liberty and justice for all.”

Odds are that you don’t remember this version of America’s traditional “Pledge of Allegiance” from grade school. The pledge was written by Francis Bellamy as a flag raising ceremony and salute for the celebration of Columbus Day in 1892. The piece was quickly adopted as America’s national pledge and it became customary to begin every school day by reciting it. Bellamy’s work however, was changed by Congress in 1954 (23 years after the author’s death) in order to advance religion in America and to protect against the growing threat of communism. The pledge, which is still recited nearly every day in a large number of public schools funded by the government, continues to be one of the most controversial issues involving separation of church and state.

But is that all we have to worry about in modern America? Some kids being asked to say “under God” every morning? Not even close.

Today we have more than just the “In God We Trust” motto and “under God” pledge to worry about when it comes to Separation of Church and State. Right now, around the country, there are public schools teaching Young Earth Creationism as an alternative to evolution in science classes. There are ongoing attempts by powerful religious groups to outlaw same sex marriage and abortion based on their religious beliefs. And, most terrifyingly, we have candidates for President who think “progressive” and “secular” are bad things (despite the fact that these ideals form the basis of the U.S.).

Even Mitt Romney, who won the Republican Party’s nomination for the presidency in the 2012 election cycle, fails to understand the importance of Separation of Church and State and uses modern additions to once-secular ideas to justify his ignorance.

“The Founders proscribed the establishment of a state religion, but they did not countenance the elimination of religion from the public square,” Romney wrote in his Faith in America address in 2007. “We are a nation ‘under God,’ and in God we do indeed trust.”

It’s important, maybe more so now than ever, that we honor the time-tested policy that is Separation of Church and State. We must remember, when we cast our votes in this upcoming election and those that follow, to choose people who understand and respect the constitutional principle that has made us great and that believers and non-believers alike have embraced for generations. We should remember that no one wins when we let mythology influence public policy.[3]

[2] James H. Hutson (2003). Forgotten Features of the Founding: The Recovery of Religious Themes in the Early American Republic

[3] This shirt is available here: http://absenceofclothing.com/products/dlmipp. Use coupon code “DGM” for 10% off