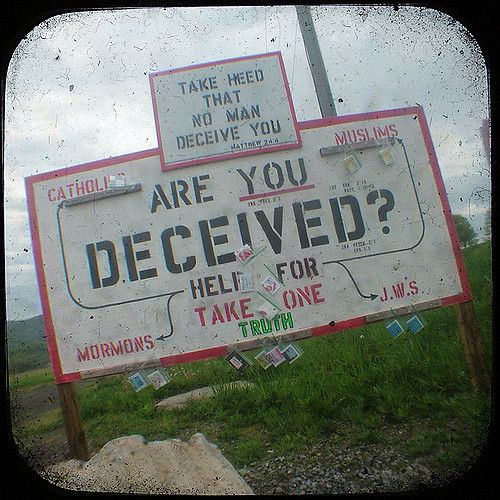 Fundamentalist belief grows brains incapable of dealing with the world as it actually is. Being raised in a home where you’re taught from birth — as I was as the son of evangelical missionaries — that the evidence of your eyes and ears is wrong, that, for instance, unseen forces are fighting over the destiny of your soul, that whatever science the local newspaper or your teacher says to the contrary, the earth is young and science can’t be trusted, changes your brain. Delusion leads to more delusion, unless something helps you snap out of it. I describe my “snapping out” process in my new book And God Said, “Billy!”. There I explore the roots of American religious delusion, and offer another way to approach spirituality and God that makes peace with a fact-based life.

Religious delusion takes smart young brains and makes them unable to relate to the actual world. It makes them ready to believe anyone standing “against the establishment,” since the fact-based community has always been portrayed by evangelicals as the enemy of their Bible-based literalism and the godly community of the self-isolated embattled I-believe-everything-in-the-Bible faithful.

Thus the “world’s way” is always suspect — even when it is true. So 2 plus 2 can’t equal 4 because “those liberals” writing in the New York Times say it does. “Worldly” facts are bad. They contradict scripture. So down the rabbit hole we go! Enter the Tea Party and its evangelical base primed for accepting an alternative reality.

This evangelical-Tea Party anti-facts conditioning is the only way to explain what the New York Times describes here:

After the budget standoff ended in crushing defeat last week and the political damage reports began to pile up for Republicans, one longtime party leader after another stepped forward to chastise their less seasoned, Tea Party-inspired colleagues who drove the losing strategy… [Yet] in Mississippi, a 42-year-old Republican state senator, Chris McDaniel, was announcing his bid to take the seat held by one of those “adults” — Senator Thad Cochran, 75, a six-term incumbent and the very picture of the Republican old guard, whose vote to end the standoff Mr. McDaniel called “more of a surrender than a compromise.” Insurgent conservative groups like the Senate Conservatives Fund, the Madison Project and the Club for Growth immediately announced their support for Mr. McDaniel, the chairman of the Mississippi State Senate’s Conservative Coalition and a former Christian-radio host, providing an early glimpse of what the next three years are likely to hold for the Republican Party.

The evangelical/Tea Party wing of the GOP only makes sense  when you realize that they see politics as an extension of their embattled religion. Faith based politics, for instance that president Obama isn’t one of us, when he is, or that he’s not a Christian, when he is, or that his medical care reforms are socialism when they’re not come from a theological mind set secular folks just don’t grasp. Far from learning from their failure — say to force the end of health care reform, the Tea Party-evangelicals that drove the confrontation between Congress and the president and that put the 144 House Republicans that voted against ending the shutdown in Congress, are now redoubling their forlorn bid to take the GOP farther and faster into their fantasy land of paranoid right wing delusion.

“This was an inflection point because the gap between what people believe in their hearts and what they see in Washington is getting wider and wider,” said Jim DeMint, the Heritage Foundation president, who, as a founder of the Senate Conservatives Fund, is helping lead the evangelical-Tea Party insurgency. DeMint, a guru of flake dysfunction to the Republican bat-crazy rabid right, said of his dysfunctional evangelical-Tea Party followers: “They represent the voices of a lot of Americans who really think it’s time to draw a line in the sand to stop this reckless spending and the growth of the federal government.”

Following the disastrous $24 billion tab meaningless gesture, that gained only bad approval poll numbers, evangelical-Tea Party House Republicans learned nothing. “Republicans have an opportunity to reset the debate over the next few months. As the nation’s attention turns from Washington politics to the Obamacare disaster, Democrats will have no choice but to reconsider our fair and reasonable proposals to delay the law,” Georgia evangelical-Tea Party Republican Rep. Tom Graves said. Rep. Mick Mulvaney, a leader of the House conservatives said that the defeat came about because conservative weren’t able to “drive home” the argument.

Appeals to rational thought, facts or evidence gain no traction in brains conditioned to think that reality itself is a threat and that theology contradicts science. What began in a million Sunday schools produced a 24 billion fiasco to no purpose, diminished America’s standing in the world, and hurt countless Americans. It takes a lifetime of literalistic Bible studies to destroy a human brain as completely as is necessary to make an otherwise intelligent person trust Bronze Age myths over science and a flake as obviously perverse as Ted Cruz over a man of such obvious integrity as President Obama, let alone interpret Jesus’ teaching as a reason to strip the poor of health care.

Frank Schaeffer is a New York Times bestselling author of more than a dozen books. He has been a frequent guest on the Rachel Maddow Show on NBC, has appeared on Oprah, been interviewed by Terri Gross on NPR’s Fresh Air and appeared on the Today Show, BBC News and many other media outlets. He is a much sought after speaker and has lectured at a wide range of venues from Harvard’s Kennedy School to the Hammer Museum/UCLA, Princeton University, Riverside Church Cathedral, DePaul University and the Kansas City Public Library.