Spencer Cone, the pastor of the New York Baptist Church, was worried about the future of the United States. In 1824 he gave a speech before the membership of the American Bible Society (ABS) praising the formation of this new evangelical benevolent association as a triumph over “the age of Voltaire, and Hume, or Gibbon, and Paine.” Like today’s defenders of the idea that the United States was founded as a Christian nation, Cone pointed to the role that the Bible played in the lives of the Pilgrims of Plymouth and the Quakers of Pennsylvania. All one had to do was look to the past to find plenty of evidence that the Bible and Christianity played an important role in the American founding. This history, Cone added, had been hijacked by the early 19th-century purveyors of the Enlightenment.

Voltaire, David Hume, Edward Gibbon, and Thomas Paine all had an unwavering faith in human progress. This faith assured them that organized Christianity would eventually crumble under the weight of reason. The founders of the ABS were ever-aware of the threat that these secular ideas posed to the Christian civilization that they hoped to create in the United States. Elias Boudinot, the founder and first president of the ABS, wrote an entire book, The Age of Revelation, to counter Paine’s anti-Christian screed, The Age of Reason.

But no one drew the ire of the founders of the ABS more than Thomas Jefferson. When the primary author of the Declaration of Independence defeated John Adams in the presidential election of 1800 his followers described the victory as a natural extension of the American Revolution. The tyranny of the Federalist Party (of whom Boudinot, Jay, and most of the ABS founders were members) was over. The Federalist attempt at using Christianity as a means of keeping moral order in the country would now give way to a new age of liberty and religious skepticism.

Jefferson embodied everything that the ABS opposed. He rejected traditional Christian beliefs such as the deity of Christ and his resurrection from the dead. He did not believe that the Bible was inspired by God. He despised Calvinists of both the Congregational and Presbyterian variety. He supported the French Revolution, an uprising associated in the Federalist mind with atheism and the destruction of organized religion. He opposed established Christianity and called for the separation of church and state. And he believed that Christians were on the wrong side of history. As Jefferson famously wrote to his friend Dr. Thomas Cooper in 1822, “Unitarianism…will, ere long, be the religion of the majority from north to south, I have no doubt.”

By the time the ABS was founded in 1816, the Federalists had fallen out of favor politically, but they could still cast their vision for a Christian nation through the proliferation of voluntary organizations such as the ABS.  Progress in the areas of civil liberty and science were certainly important, but this kind of progress paled in comparison to the true movement of history—the advancement of evangelical benevolence and the distribution of the Bible to the world. As Jeremiah Day, the President of Yale College, put it in an address to the ABS, scientists of the Enlightenment age in America set out to uncover knowledge, but the Bible Society would go a step beyond—it would reveal mysteries that would only be “unfolded to the enraptured view of the redeemed.” This was a better kind of improvement—moral improvement rooted in the teachings of the Christian scriptures.

In the early nineteenth-century, the building of a Christian republic meant opposing Thomas Jefferson. Today, this no longer seems to be the case. In fact, some Christian nationalists believe that Jefferson and his legacy are actually useful in their ongoing argument that the founding fathers of the United States set out to forge a Christian country.

Ironically, the same Thomas Jefferson that admired the Enlightenment views of Voltaire, Hume, Gibbon, and Paine, and served as the primary target for the men who built the American Bible Society, is now celebrated by David Barton, the nation’s most influential Christian nationalist. Barton is a GOP political activist who uses the past to advance his conservative agenda in the present. He is the founder and president of Wallbuilders, an organization based in Aledo, Texas, that is “dedicated to presenting America’s forgotten history and heroes, with an emphasis on the moral, religious, and constitutional foundation on which America was built—a foundation which, in recent years, has been seriously attacked and undermined.” Barton is the former vice-chair of the Texas Republican Party, the same political organization whose 2004 platform included the line “the United States of America is a Christian nation.”  His books and videos about America’s Christian heritage are popular among conservative evangelicals and he speaks on the subject to large audiences, both in person and through his radio and television shows. In 2005 Time named Barton one of the twenty-five most influential evangelicals in America. He is currently running Keep the Promise, a multi-million dollar Ted Cruz super PAC.

In the summer of 2012 Thomas Nelson Publishers released The Jefferson Lies: Exposing the Myths You’ve Always Believed About Thomas Jefferson. In this book Barton challenged virtually everything that Jefferson scholars have said about the third President of the United States. These historians, Barton argued, portrayed Jefferson as an atheist, a racist, a bigot, and a slaveholder when in fact he was none of these things, as HNN reported.

Barton’s Jefferson looked more like a 21st century member of the Christian Right than a product of the eighteenth-century world in which he lived. He suggested that Jefferson used federal funds to promote missions to Native American tribes and rarely questioned the doctrines of orthodox Christianity. Barton argued that Jefferson rejected the idea of the “separation of church and state,” did not have a child with his slave Sally Hemings, tried to establish a theological professorship at his public and non-sectarian University of Virginia, and founded the Virginia Bible Society. He even tried to make a case that Jefferson did not produce a version of the Gospels void of verses describing the miracles of Jesus.

The critical response to The Jefferson Lies was fast and furious. Jefferson scholars rightly dismissed the book as little more than political propaganda. Evangelical historians also found Barton’s Jefferson to be unrecognizable. Martin Marty, the dean of American church historians, said that the book should be named “Barton’s Lies About Jefferson.” A group of African American pastors in Cincinnati criticized Barton for refusing to expose Jefferson as a racist and a slaveholder. These pastors petitioned Thomas Nelson to stop publishing the book.

But the strongest attack on Barton’s work came from Warren Throckmorton and Michael Coulter, professors at Grove City College, a conservative Christian college in western Pennsylvania. Throckmorton and Coulter published, first in e-book form and later in print, Getting Jefferson Right: Fact Checking Claims About Our Third President.  Throckmorton and Coulter never claimed to be historians (Throckmorton is a psychology professor and Coulter is a political scientist), but they did prove to be excellent fact-checkers. In a style that can only be described as “blow-by-blow,” these professors debunked virtually every claim that Barton made about Jefferson.

Eventually the conservative evangelicals who supported Barton became concerned about the veracity and integrity of The Jefferson Lies. Jay Richards, a Christian philosopher and intelligent design advocate affiliated with the Discovery Institute in Seattle, gathered a team of conservative evangelical historians together to evaluate the book. These historians found the book to be inadequate in its treatment of Jefferson and filled with historical errors of fact. In light of the committee’s recommendation, Thomas Nelson pulled the book from print. Throughout the entire ordeal Barton defended his scholarship in The Jefferson Lies and seemed surprised that Thomas Nelson decided to stop the print run.

In late 2015, the publishing arm of the right-wing website World Net Daily published a second edition of The Jefferson Lies. In its promotional literature, World Net Daily describes Barton’s book as “The New York Times bestseller pulled from the shelves because of political correctness.” Apparently Barton made some changes to respond to Throckmorton and Coulter’s criticism, but the general argument remains the same. Barton continues to deny that there is anything wrong with his research or his portrayal of Jefferson, though he has been discredited by nearly every practicing American historian in the country. (He could not find an American historian willing to endorse the book.)

In a video he released in May 2015, Barton is pictured in the Wallbuilders library among the thousands of early American documents that he has collected over the years. He holds up an American Bible Society certificate signed by John Jay. He also shows an original 1816 ABS Bible and a copy of the 1816 ABS constitution. As Barton speaks into the camera he discusses the career of Elias Boudinot, the ABS founder and a former President of the Continental Congress. His point cannot be missed. Many of the men responsible for the creation of the United States believed that the Bible should play an important role in American life.

Barton is right. The founders of the American Bible Society were an impressive bunch. But if these men were alive today they would be shocked, if not appalled, to learn that David Barton, the country’s most prominent defender of the Christian republic they hoped to construct, is now singing the praises of Thomas Jefferson. Boudinot, Jay, Cone, Day, and the other ABS builders of a Christian America (we can also add Francis Scott Key and John Quincy Adams, and John Marshall to that group) were engaged in an early 19th-century culture war for the soul of the new nation against a group of skeptical intellectuals that embraced and promoted a secular vision of America’s future.

By defending Thomas Jefferson, David Barton has dishonored their memory.

John Fea teaches American history and chairs the History Department at Messiah College in Mechanicsburg, Pennsylvania. He is the author of The Bible Cause: A History of the American Bible Society (Oxford University Press, 2016) and blogs daily at www.thewayofimprovement.com 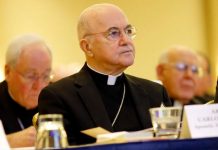