By Josh Kilburn | 7 February 2015
Americans Against the Tea Party 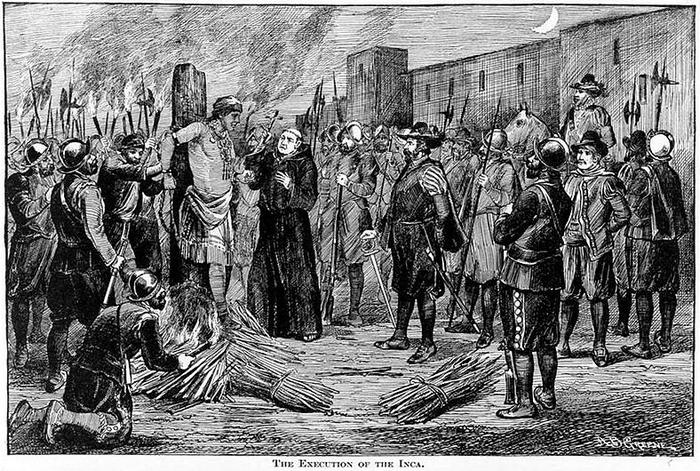 The right-wing’s been freaking about Obama bringing up the crusades and the Inquisition, to show that Christianity doesn’t have a blood-free history. Whether it’s posting videos with skewed definitions of the Crusades or claiming Islam is still worse because reasons, they’re in a blind rush to defend the tribe and, in the process, they’re not orchestrating a very effective defense.

History is full of atrocities committed by Christians for Christ, against not just other religions but against Christians themselves. Let’s take a look at some of them, shall we?

This is an ongoing conflict, and it’s my first go-to when I need to shut down a teabagger on a rail. While the UN hasn’t called it a genocide yet, Reuters acknowledges that what the Christians are doing is ethnic cleansing against a Muslim minority. The conflict is very much one of Christians working to expel Muslims from the country, and by all accounts, they’ve been very successful so far.

I vaguely remember this genocide, but it’s worth noting because of how the pieces fell. There isn’t a huge language distinction; Serbian, Bosnian, and Croat are part of a dialect continuum. The difference is in the religion; Bosnian Serbs are Orthodox, while Bosnia Muslims were, well, Muslims. And that was what got them targeted during the collapse of the former Yugoslav Republic. The term “Ethnic Cleansing” gets thrown around to describe this one, too, and it was an extremely effective example of one (which is why it coined the term) — one of the worst ones in Europe since the Holocaust targeted everyone outside the Nazi paradigm for the ideal state. Speaking of which …

Make no mistake, there were Christian collaborators with the Holocaust. The real kicker, though, is knowing that the Holocaust didn’t happen in a vacuum. In many ways, the Holocaust was the child of centuries of Christian Antisemitism in Europe. “Christ Killer” is a common Christian slur thrown at Jewish people, and the Blood Libel didn’t come from Muslims, it came from Christians. Martin Luther, the father of Protestantism, was a raging anti-Semite; in addition to his theses, he also wrote a book called On The Jews and Their Lies. While the religious outlook of the Nazis is questionable, what’s not in question is that centuries of Christian Antisemitism allowed it to happen.

While I’m talking about Jewish abuse at the hands of Christians, let’s discuss the Pogroms. Pogrom is from Pogromit, a Russian verb meaning “to create a desert.” The Pogroms were a series of violent attacks carried out against the Jews by the Christians in Russia and Poland over the dates listed. The 1880s pogrom was triggered by anti-Jewish propaganda that the czar had been assassinated by Jews. Notice the date for the last one: 1921, and note how close that is to 1933; the pogroms were fresh on the mind of the Nazis when they seized power.

American slavery is a special beast; when you discuss slavery, you have to do it while acknowledging that American Slavery is a superior brand of evil. While all slavery is wrong, there was something perversely worse about American Slavery that, up to that point in history, makes it stand out. It’s that American Exceptionalism I keep hearing about. During the era in the lead up to the Civil War, both pro- and anti-slavery advocates threw Bible verses at one another, but the pro-slavery advocates where coming at it from a stronger position if they considered themselves “Biblical literalists”. In fact, some have argued that the notion of “Biblical Literalism” sprang up in defense of Slavery — meaning that the slave holding mentality is still with us to this day every time someone “takes the Bible literally” to defend Creationism or bash LGBT+ folk.

It’s no secret that Christians did everything they could to eradicate the Native American traditions via boarding schools. You might just live in an alternative reality if you deny that. In 1872, the “Christanizaiton” of the Native Americans was still ongoing. Early Christian colonists referred to them as “devils” and “heathens,” and ever since the first Catholic Spaniard set foot in the New World, were working to wipe any last trace of their culture from the face of the world. And this is to say nothing of the brutality they visited on Native Americans in the form of violence and murder.

The Thirty Years’ War led to the Treaty of Westphalia, which is the single genesis for the modern state as we know it. But the Thirty Years’ War is also known for being one of the bloodiest religious wars in Europe’s history, when Catholics and Protestants turned their blades on one another and decimated a full 20-40% of Europe’s population. There were witch hunts and mass burnings throughout Germany, and the period is generally regarded as the peak of European Witch Hunting, itself another popular Christian pastime. About the same time, Catholics sacked the city of Magdeburg and slew about 30,000 Protestants; according to the poet Fredrich Shiller, “In a single church fifty women were found beheaded, and infants still sucking the breasts of their lifeless mothers.”

I know what you’re thinking — to the present? Yep. The Office of the Inquisition still exists today; in 1965 they made it the Congregation for the Doctrine of the Faith. They stopped their formal Inquisition duties sometime after the Napoleonic Wars, but up until that time, the Inquisition was in full swing, hunting down Jews, Heretics, and Witches. There were actually several Inquisitions, but the most famous is the Spanish Inquisition, whose brutality needs no introduction. When you think of Christian violence in the name of Christ, there’s a reason the horrors of the Inquisition spring to mind first.

The Albigensian Crusade happened in Southern France and was an effort of the early Church to stamp out a competing ideology — in this case, Catharism. It ran from 1209 to 1229, spanning 20 brutal years. At heart, Catharism was a form of gnosticism, and was labeled a Manichean heresy by the church. It kick-started with the Massacre at Béziers, where the Church massacred the entire population.

I’m listing the First and Second Crusade here for another reason than the typical one. Right wing Christians like to claim that the Crusades were a “defensive” conflict, which is all well and good, but it overlooks the violence done against Jewish people in Europe at that time — executed, of course, by Christians. After all, the Christians were liberating the Holy Land from the “Christ Killers,” which, if you look above, I noted is a common slur against Jewish people. There was plenty of violence in political cluster that would later become Germany, for example. Accusations of ritual murder flourished and brutal religious violence was the retort; the Rhineland Massacres were just some examples of it.

Hypatia was the last librarian at the Library of Alexandria. She incurred the wrath of a Christian Preacher named Peter; one day, on her way to the Library, Peter and a mob of hysterical Christians ambushed her and flayed her alive. They then proceeded to burn down the greatest reservoir of knowledge in the Classical World up to that point, performing what Carl Sagan described as “radical brain surgery.” Hypaita wasn’t the first pagan that Christians killed; in 356, Pagan ceremonies were punishable by death in Christian kingdoms, and Christian Emperor Theodosius would decree that children playing with pagan statues should be executed.

This list is far from exhaustive, you can find more here. I didn’t even touch on the Catholic-sponsored Death Camps in Vietnam. I instead tried to call attention to some of the lesser known instances, as well shine a light on some of the better known ones. It’s important to remember that no one religion has a claim on moral superiority, but anyone claiming that Christianity is less violent than Islam is a graduate from the David Barton school of Alternative History World building.

Josh Kilburn is a writer, author, blogger, and freelancer with a Bachelor’s degree who lives in the buckle of the Rust Belt.

Geoffrey Robertson QC: Pope Pius XII did everything to help the Nazis, and nothing to save the Jews