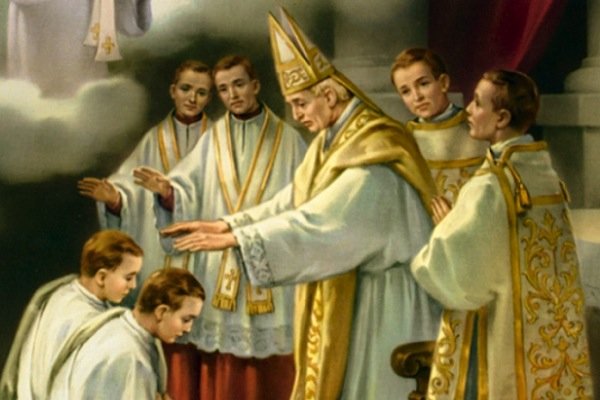 The belief that religious figures should be celibate began long before the birth of Christianity. Ancient Druid priests were thought to have been celibate and Aztec temple priests were expected to remain sexually abstinent. Other pre-Christian sects mandated that the people chosen for their sacrificial offerings must be pure, meaning that they had never engaged in sex.

Jesus lived a chaste life and never married and at one point in the Bible is referred to as a eunuch (Matthew 19:12), though most scholars believe that this was intended metaphorically. The implication was that Jesus lived a celibate life like a eunuch. Many of his disciples were also chaste and celibate. Paul, in his first letter to the Corinthians, recommends celibacy for women: “To the unmarried and the widows I say that it is well for them to remain single as I do. But if they cannot exercise self-control, they should marry. For it is better to marry than to be aflame with passion.” (1 Cor. 7:8-9) But the early Christian church had no hard and fast rule against clergy marrying and having children. Peter, a Galilee fisherman, whom the Catholic Church considers the first Pope, was married. Some Popes were the sons of Popes.

The first written mandate requiring priests to be chaste came in AD 304. Canon 33 of the Council of Elvira stated that all “bishops, presbyters, and deacons and all other clerics” were to “abstain completely from their wives and not to have children.” A short time later, in 325, the Council of Nicea, convened by Constantine, rejected a ban on priests marrying requested by Spanish clerics.

The practice of priestly celibacy began to spread in the Western Church in the early Middle Ages. In the early 11th century Pope Benedict VIII responded to the decline in priestly morality by issuing a rule prohibiting the children of priests from inheriting property. A few decades later Pope Gregory VII issued a decree against clerical marriages.

The Church was a thousand years old before it definitively took a stand in favor of celibacy in the twelfth century at the Second Lateran Council held in 1139, when a rule was approved forbidding priests to marry. In 1563, the Council of Trent reaffirmed the tradition of celibacy.

Several explanations have been offered for the decision of the Church to adopt celibacy. Barry University’s Ed Sunshine told Knight-Ridder that the policy was initiated to distinguish the clergy as a special group: “A celibate clergy became the paradigm of separation from the sinful world.” A.W. Richard Sipe, a former priest and author of Sex, Priests and Power: The Anatomy of Crisis (1995), told Knight-Ridder that the “question at the time was who is the final power – the king or the church. If [the church] could control a person’s sex life, it could control their money, their employment, their benefice.” Garry Wills suggested in Under God that the ban on marriage was adopted to lift the status of priests at a time when their authority was being challenged by nobles and others.

The Roman Catholic Church’s position today is derived from the Council of Trent. Celibacy is considered an important part of the priesthood, a sign of a priest’s commitment to God and service. Today, though, there are some exceptions to the rule of unmarried clergy. Anglican ministers who were already married when they joined the Catholic Church are allowed to remain married if they choose to join the priesthood.

The Catholic Church distinguishes between dogma and regulations. The male-only priesthood is Catholic dogma, irreversible by papal decree. The ban on marriage is considered a regulation. As Knight-Ridder put it, “That means the pope could change it overnight if he wished.”

The first modern scholar to make a comprehensive study of church celibacy was Henry Charles Lea over a century ago. Lea, a Protestant critical of the Catholic Church, closed his long book with the following statement:

We may be on the eve of great changes, but it is not easy to anticipate a change so radical as that which would permit the abolition of celibacy. The traditions of the past must first be forgotten; the hopes of the future must first be abandoned. The Latin church is the most wonderful structure in history, and ere its leaders can consent to such a reform they must confess that its career, so full of proud recollections, has been an error.

Henry Charles Lea, An Historical Sketch of Sacerdotal Celibacy in the Christian Church (J. B. Lippincott & Co., 1867). (To access an online edition of the book, published by MOA (Making of America) click here (allow several minutes to download the text).

Celibacy in the Catholic Church: The Catholic Bishops’ Conference of India website, http://www.cbcisite.com/.