Alas, a transgender bathroom law wouldn’t have helped a single one of these victims, many of whom have had to live in silence with their trauma and shame for decades.

Meanwhile, for all of their yammering about gay marriage and public restrooms, evangelical protestant churches also have a lot to answer for. In 2015, the exposure of 19 and Counting’s Josh Duggar’s sexual proclivities revealed not only that America’s favorite Christian family wasn’t as wholesome as they seem (and that their faith community helped enable him). In February, the Washingtonian broke a story revealing decades of sexual abuse against children in Sovereign Grace Ministries, a suburban megachurch network.

According to VictimsOfCrime.Org, one in five girls and one in 20 boys become victims of sexual abuse. The Rape, Abuse and Incest National  Network (RAINN) grimly adds:

The majority of perpetrators are someone the child or family knows. As many as 93% of victims under the age of 18 know the abuser.

The above goes a long way towards explaining why a child, pre-teen or adolescent is more likely to be molested in church than in a transgender bathroom. In fact, evangelical leaders have grown concerned enough about sexual abuse in their ranks that Godly Response to Abuse in the Christian Environment (GRACE) was launched to train, educate and help faith communities prevent this from happening. Alas, the facts revealed in a Powerpoint slide presentation show they’ve got a long slog ahead of them.

What’s even scarier is that sexual abuse and child molestation may even be more likely to occur in churches due to the toxic combination of the high level of trust placed in church leaders combined with the authoritarian upbringings of many of the children in their charge. It’s hard to defend yourself against abuse when you’ve been taught to obey adults without question all your life.

GRACE even has a name for this phenomenon that contributes to sexual abuse in churches: The Five Exploitations:

And what’s the data on child molesting by strangers in transgender bathrooms? ZERO, according to a report from Mic. Apparently, there are so few reports on children getting molested in public restrooms by transgender people that no one has bothered gathering any statistics. 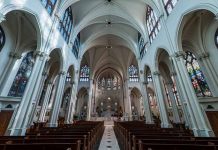