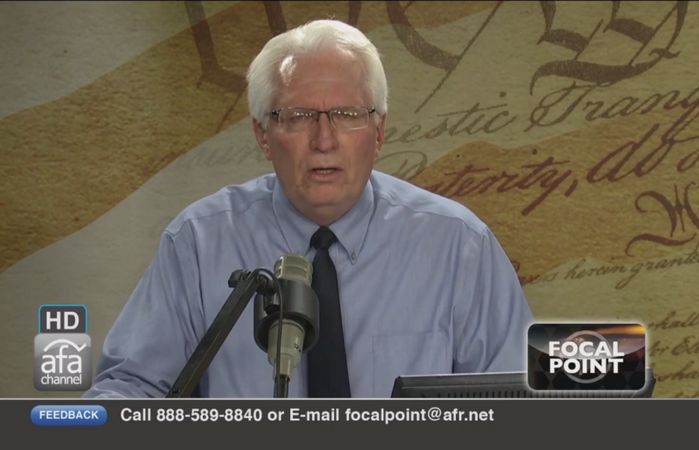 Posterboy for the Religious Right and theocrat Bryan Fischer recently stuck his foot in his mouth on his radio show again, while opining on who is and is not qualified to be a judge in the American legal system.

So many facepalms here. First, Fischer seems to be claiming that the right to “life, liberty and the pursuit of happiness,” as given to us by a creator, is a Constitutional right. Sorry, Bry-Bry, that’s in the Declaration of Independence — the only place a “creator” is mentioned in our founding documents. And I can point you to several passages in the Bible (Fischer’s dream legal document) that show even God himself disagrees that everyone has a right to life. You know, since the almighty loves killing people.

Fischer is talking about abortion in this latest vomit of nonsense, saying that if you’re not pro-life (more accurately anti-choice), then your stance is contrary to our “Constitutional” right to life. Here’s the kicker. Bryan Fischer is very much pro-death penalty and has said so on numerous occasions, including in the tweet below. That would seem to contradict his earlier statement that everyone has a right to life… well, unless Bryan Fischer says you don’t. What?

So which is it Bryan? Did your god give people the right to life but man can take it away when they do something bad? If so, I missed that asterisk on the ten commandments. This is just another example of why people can’t take the Religious Right seriously anymore. It’s full of hypocritical extremists advocating theocracy when it aligns with their personal agenda, while crying persecution when someone calls them out on their bigotry

Kevin Davis is the head writer and editor for SecularVoices, and the author of Understanding an Atheist: A Practical Guide to Relating to Nonbelievers, a book aimed at improving relationships between the religious and their atheist loved ones. Kevin is also the Executive Director of Young Skeptics, an elementary-level after-school program for kids focused on critical thinking.