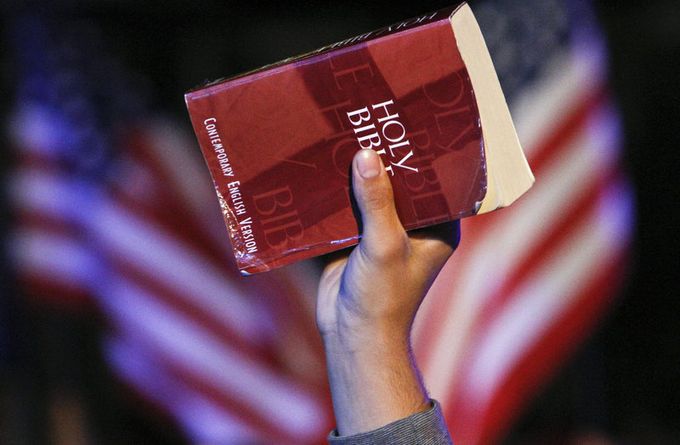 Excerpt from God and His Demons, by Michael Parenti (Prometheus Books, 2010). Reprinted with permission from the author.

From Chapter 15: The Return of Totalitarian Theocracy

One is often told that it is a very wrong thing to attack religion because religion makes men virtuous. So I am told; I have not noticed it.
—Bertrand Russell

Many of us fear living under the rule of theocrats whose tolerance for diversity and dissent only lessens as their own power grows. Looking at history we have good reason to tremble.

In the fourth century AD, the Christianists—backed by affluent converts and the emperor’s sword and purse—managed to make Christianity an officially recognized religion of Rome, enjoying state support. Once so established, they strove to make their religion not merely the dominant one but the only one. By AD 395, they succeeded in getting paganism banished from public life. Those who continued to practice pagan rites or who failed to report such doings were subjected to severe sanctions.

The theocracy that emerged exercised a deadening grip on Western civilization for centuries. Depicted as an oasis of scholarship amid the brutish ignorance of the Dark Ages, the church actually was a major purveyor of that ignorance, a suppressive force in such fields as literature, philosophy, art, theater, science, medicine, anatomy, astronomy, and commerce.[2] To give one example: Pope Alexander III (ca. 1100-1181) forbade monks to study medicine, his belief being that all ill health was rooted in demonic possession; hence, the only proper and effective remedy for sickness was prayer and exorcism.

The Christianist totalitarian theocracy demolished the great Greco-Roman tradition of rational inquiry and secular learning. Luciano Canfora refers to the relentless war waged against classical culture and its sanctuaries, “which meant, against the libraries…. The burning of books was part of the advent and imposition of Christianity.”[3] In pagan times, Rome had more than twenty public libraries, some with up to 500,000 volumes. But by the end of the fifth century, with Christianity triumphant, the libraries were reduced to melancholy tombs. The profession of copyist disappeared, as did most secular writings, including the rich literature from Greek and Roman antiquity. All that remained were the church’s meager monastic collections rarely numbering more than a few hundred volumes, mostly religious in content. For the next six hundred years hardly a book of note in secular learning was published in Christendom.[4]

The theocratic extremists within Christianity, Islam, and various other religions today sing much the same refrain as did the absolutists of yore. It goes something like this:

We embrace our religion because we know in our hearts and minds it is true. Were it not true, we would not hold to it. Since ours is the one true faith, it follows that all other faiths are false.

False beliefs about the most important questions of one’s life and one’s soul are not only wrong but wrongful, an offense to God. Therefore, inflicting sanctions upon recalcitrant heretics and infidels is a laudable service to the Almighty.

In addition, as St. Paul warns, those of little faith are most likely to succumb to degrading immoral passions. The nonbelievers and false believers are the fornicators, adulterers, self-abusers, and the “effeminate ones” given over to “vile affections.”[5]

Today’s reactionary theocrats are unmoved by dire socioeconomic ills. If they do charity work among the poor, it is principally with an eye to winning converts. They care not a whit about economic injustice, environmental devastation, and war. Rather they fix upon what they consider to be the real evils that plague America and the world: fornication, gay marriage, the teaching of evolution, sexual scenes on television, the lack of religion in civil society, and the like.

Their theocracy would be a vessel of politico-economic reactionism. Civil rights, labor unions, and public schools would be abolished. As Rev. Jerry Falwell made clear: “I hope to see the day when, as in the early days of our country, we don’t have public schools. The churches will have taken them over and Christians will be running them.”[6] Police and military forces (public and private) would be expanded still further than today, but human services would be abolished, including unemployment benefits, Social Security, and environmental protections. The destitute and disabled would have to rely on their families or private charity. Giant corporations will be free of all taxes and regulations. Women would be obliged to remain domiciled under the dominion of their men, who in turn would surrender themselves to a totalitarian church and state.

In the mind of the theocrats, “religious freedom” means the right to roll back secular culture and impose a monochromatic belief system upon everyone. Right-wing fundamentalist leader Randall Terry told an audience of the like-minded faithful: “I want you to just let a wave of intolerance wash over you…. Our goal is a Christian nation…. We are called by God to conquer this country. We don’t want equal time. We don’t want pluralism.”

The objective is to take over the US government and replace civil law with biblical law. This would mean extending the death penalty to blasphemers, gays, and women who commit adultery.[9] (Male adulterers are not mentioned in the Bible, hence they need not worry.) Referring to doctors who perform abortions, Terry warns: “When I or people like me are running the country, you’d better flee because we will find you, we will try you and we’ll execute you…. I will make it part of my mission to see to it that you are tried and executed.”[10]

Gary North, a leading “Reconstructionist” theocrat, looks forward to the day when only Christians will have the right to vote and those who refuse to “submit publicly” to religious rule will be denied citizenship. North and his theocrats are working to construct “a Bible-based social, political, and religious order which finally denies the religious liberty of the enemies of God.”[11]

Fundamentalist minister James Kennedy, who hosts monthly luncheons for members of Congress, sums it up: “Our job is to reclaim America for Christ, whatever the cost. As the vice regents of God, we are to exercise godly dominion and influence over our neighborhoods, our schools, our government, our literature and arts, our sports arenas, our entertainment media, our news media, our scientific endeavors—in short, over every aspect and institution of human society.”[12]

To achieve their goals, the theocrats infiltrate the armed forces (see previous chapter) and wage electoral campaigns to take over everything from local school boards to the White House itself. They claim the support of numerous members of the US Congress. And as of 2006, Christian fundamentalists reportedly held a majority of seats in eighteen of fifty state legislatures.[13]

Moderate Christians insist that reactionary theocrats are not “real Christians” and do not represent the Christianist majority. But as noted earlier, the moderates are not easily heard over the money-driven din and big-tent mobilizations produced by the religious Right. During the Middle Ages, when Christianity was in its glory days, the moderates were burned at the stake. Today they are simply outspent and marginalized.

13. Ellen Bulf, “Roots of the Religious Right,” Committees of Correspondence for Democracy and Socialism, January/February 2008.

Michael Parenti is an internationally known award-winning author and lecturer. He received his Ph.D. in political science from Yale University. He has taught at a number of colleges and universities, in the United States and abroad. Some of his writings have been translated into Arabic, Azeri, Bangla, Chinese, Dutch, French, German, Greek, Italian, Japanese, Korean, Persian, Polish, Portuguese, Russian, Serbian, Spanish, Swedish and Turkish.