This powerful recitation of the history of the Vatican and its allies in stifling and undermining women’s and their rights to contraceptives unfortunately is not available in printed form on Amazon. However, I have acquired the Kindle version and suggest that anyone who cares about human survival on our plundered planet acquire and digest this author’s lifetime of experience in confronting first hand the horrors of religious zealotry.

The shocking failure of remedial action, the constant failure of our media to mention where we humans are headed and the growing impact on every aspect of our planet’s deterioration makes ever more certain a future world best described by Cormac McCarthy in his novel “The Road”.

I had particular empathy for this book, since my own over 50 year career in family planning has in time run parallel with his. Also I have met and worked with many of the people he has, although his work internationally has involved far more on the ground field experiences. It is his extensive recitation with first hand encounters that makes his case against the Vatican role in our current population dilemma so convincing.

This veteran diplomat was present at seminal times from the 1960’s onward to experience personally the egregious influence of the Vatican in inhibiting family planning programs. He was present at the UN population conferences in Bucharest in 1974 and Mexico City in 1984. He knew all those early lions favoring family planning such as William Draper Sr. As a junior and then senior officer in various German ministries as well as UN FPA representative in various developing nations, Dieter Ehrhardt saw how the tentacles of Vatican power time after time intimidated leaders around the world to keep them from doing the right thing, namely aggressively providing voluntary birth control to women who sought it.

Having observed with vehement disgust this same Vatican behavior for decades, it’s come as no surprise that now Africa stands as the primary example (but far from only example) of poverty and desperation in a world where earlier FP investment would have been crucial.

It is of course sharply ironic that this brave author, a German citizen, now can see firsthand the refugee flood into his country and others. He has made his main argument devastatingly clear: Without doubt the population bomb is exploding as the result of Vatican perfidy. And while we all can agree with the present Pope, who keeps decrying about the massive poverty in the world, he fails to mention that the decades old Vatican anti birth control policies were largely responsible.

It took decades to unmask the behavior of the Catholic clergy, as the Academy Award winning movie Spotlight highlighted.

Why has the Vatican’s behavior with birth control not been similarly excoriated and massive action to fix the birth control problem taken seriously? 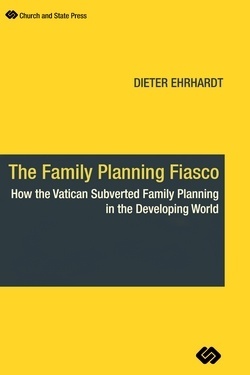