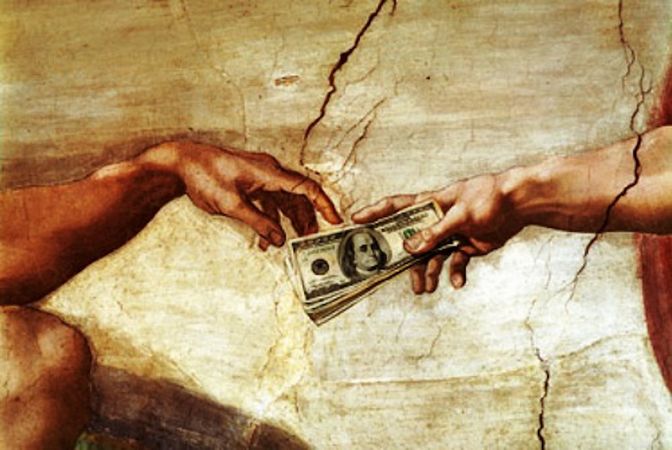 I think anyone who follows me even somewhat regularly knows that I’m a Christian. I know that’s not always a popular thing to be as a liberal, but it’s a fact nonetheless. That being said, I detest organized religion.

What “religion” is to me is a human-made concoction meant to promote the personal views of some while degrading the views of others.

Honestly the only reason I call myself a “Christian” is because it’s easier than saying, “I believe in the teachings of Jesus Christ and the values for which he stood. That being said, I oppose most things that have been written in the Bible as it is clear that much of the text has been influenced by the personal views of those in charge of translating the text through time.”

I’ve talked “religion” with Buddhists, Muslims, Hindus, Jews, Atheists (yes I consider Atheism a form of religion) and it’s amazing how personally we’re all pretty much the same. Our core values as human beings are basically identical. Things like being a good person, helping the helpless and defending the defenseless. Generally just being good people.

Why is it so many care so much about the personal religious views of others? If everyone kept their beliefs private (as they should be), practiced them in the appropriate places and didn’t judge others who believed differently – can you imagine how much more peaceful the world would be?

How many murders, wars, acts of terror or any number of other heinous acts have been committed in human history in the name of religion?

Not faith, spiritual guidance or belief in humanity – but human-made religion.

Because that’s what organized religion is – control.

It’s an easy way to take a group of people with like-minded beliefs, group them together and manipulate them for some kind of ulterior goals.

Heck, just look through history. Religious leaders often perpetuated that specific kings or emperors were “ordained by (fill in whatever God they believe in)” and for the people to rise up against them would be blasphemy. To question their rule was to go against “God,” thus risking damnation.

You can force people to support leaders who don’t have their best interests in mind by simply evoking the “wrath of … whatever God they worship.”

And this isn’t just a Christian thing. You see this with almost every religion around the world.

It’s why our Founding Fathers had it right by wanting to keep church and state separate. They didn’t put God into the United States – Christians did much later. Phrases like “One Nation Under God” and “In God We Trust” didn’t show up in the United States until long after this nation was founded. How can anyone honestly argue that this country was “founded on Christianity” when the words “Christian” or “Christianity” don’t appear even once within our Constitution?

I believe faith to be a wonderful thing. But by faith I mean spiritual faith. If you want to believe in Jesus Christ or Muhammad I don’t care – as long as you’re not taking that faith, forming it into a belief and then forcing it on others.

Hell, you don’t have to believe in anything at all. Just don’t try to force others to believe in nothing either. I’ve met plenty of atheists who act just as obnoxious as religious radicals about their lack of a belief in a God. If you don’t believe how they do, you’re an idiot.

Because at the end of the day, who really cares?

When we die, something happens to us, and that’s a certainty. Whether we ascend up into some kind of heaven, get reincarnated into something else or simply just cease to exist – something will happen to us when we die.

Our goal as humans should simply be to exist as good people, and that’s essentially what the core of all of these faiths tells us – just be a good person.

But it’s organized religion that has taken that simple goal and twisted it for human-made selfish ambitions, greed and power. Because religion is quite the tool to achieve all three of those things. Like I said earlier, many horrific acts have been committed in human history all in the name of “religion.” Individuals who’ve been convinced that the best way to show the veracity of their faith is by slaughtering those who chose not to convert to it.

Religion is nothing more than a tool that’s been used over centuries to manipulate people, usually for the benefit of a select few.

Heck, just look at this country now. Tens of millions of Americans vote against their own interests on based on essentially two “religious” beliefs:

And that’s about it. I’ve actually met conservatives that say they couldn’t care less about what economic policies either party supports, because those two issues mattered to them most. Basically, they would rather live impoverished by economic policies which hurt them than see a gay couple get married or a woman have control over her own body.

Because at the end of the day no matter what we believe, how we’re judged as people (by whomever might judge us, be it a deity or loved ones) will be determined by our actions – not the opinions of strangers who disagreed with our beliefs.