The incoming Republican Congress purports to stand for personal freedom and progress, but are swiftly showing all of us that they could well prove retrograde authoritarians on issues which most Americans have already approved and want enforced.

The latest example happens to be one that I personally have worked for here in DC which allowed our City Council after months of careful review to pass 11 to 2 in November, 2016 a Death with Dignity Act which has now been enacted in 6 states including California and has worked perfectly wherever allowed.

As the January 10, 2017 Washington Post story, “Congressman Vows to Block ‘Death With Dignity’ Law in City He Doesn’t Even Represent” tells us:

The legislation would allow doctors to help end the lives of terminally ill patients in the city—that is, if it weren’t subject to the approval of congressmen like Jason Chaffetz.

This week, the Utah representative promised to use Congress’ seldom invoked but absolute authority over Washington, DC, to block the assisted suicide law, which he said he fundamentally disagreed with, according to The Washington Post.

This same wunderkind legislator promises to continue investigating Hillary Clinton’s emails, as if that was an urgent thing to waste time and money on.

FBI Director James Comey alerted Republican members of Congress on Friday that bureau investigators would review some additional emails that might relate to Hillary Clinton’s email server. Rep. Jason Chaffetz (R-UT), the chairman of the House Oversight Committee who has already vowed to spend the next several years investigating Clinton should she be elected president, quickly rushed to announce the news, falsely claiming that the case had been “reopened.”

FBI Dir just informed me, "The FBI has learned of the existence of emails that appear to be pertinent to the investigation." Case reopened

In short it is shameful that this shoot from the hip zealot now has the power to upend what the duly elected representatives of the citizens of Washington had carefully studied and approved. Having personally spent 3 full days in the Council chambers since that Death with Dignity Act began to be discussed, I participated and listened to the full debate and am outraged that this law could be upset.

By the way, in another misstatement, Chaffetz’s use of the word “suicide” in characterizing the DC law and all the state laws simply is inaccurate, since easing the pain of a terminally ill person solely at his option comes under these statutes as not legally definable as suicide. 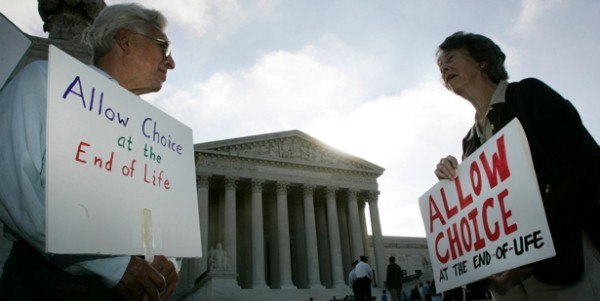 The record in Oregon where this policy has been working well for nearly 20 years requires recipients of medicines to be ingested by them alone without help from anyone.

Doubtless there are some Republicans in the new majority who could give this dangerous ideologue advice to change his view. However, it appears that when one gets such power and can restrict a democratically undertaken action passed in the best traditions of American governance, we get another perfect example of how dictators think and operate.

But, you can be sure that this is just one example in a long chain of examples of where Congressional oversight has been improperly invoked against personal freedom and the wishes of us citizens here in DC.

This brings me to my main point. For many years now, the Republican Party has well established itself as the purveyors of retrograde ideology to limit obvious good policies that help all our citizens obtain the freedoms we deserve without harming the rights of others.

The primary example of course involves obtaining for women here and worldwide full reproductive rights including abortion. Even there the retrograders are busy in DC. On January 10 we were told that a DC and Atlanta provider of medical abortion services, Carafem, was denied the right put its ads on our Metro trains. On January 11, 2017, the Transit Authority quickly reversed itself, claiming “missed communication”. Could that have meant that such an outrageous denial came initially from some now unidentified retro administrator?

I was at least hopeful when listening on January 10, 2017 to the Senate interrogation of Senator Jeff Sessions for job of Trump’s Attorney General; to hear his response to how he would deal with the rights of women as defined by Roe v Wade and the laws permitting marriages in the LGBT community. He agreed enforce the law now extant for both.

Further, in his introductory statement, Sessions underlined his deep respect for the Rule of Law as pivotal to the survival of a democratic nation. Would that his words will translate into actions that will protect those precious rights as we watch the legislative work of the new Congress evolve.

One obvious opportunity for bipartisan statesmanship could come to correct the long term failure to enforce our immigration laws that has led to unfairness for many immigrants. Sessions could be a leader in helping fashion such a compromise.

I would offer a bit of advice here, which doubtless will have no purchase with the likes of Jason Chaffetz, but has already begun to resonate with more and more American citizens. If the new majority in the Senate follows such retrograde policies, it will not be a majority past the next by election. The American people, including a lot of the disaffected who voted in anguish for Trump will hold such behavior as not getting done what they thought they were voting for. A major example: Taking down Obamacare without simultaneously enacting a desirable substitute will cause the kind of mayhem for many of those same Trump voters who are expecting better.

Both parties are on trial. Both parties are in disarray. There has never been a better time to show some bipartisan statesmanship. Tweets will soon become an anathema to most of us, if not followed by actions which resolve impasses and do right in cases by what a majority of us citizens see as settled law, as the case of abortion rights, LGBT rights and other dying with dignity laws. If the Republicans pattern of retrograde issue actions continues it will simply further prove my contention.

What are the chances of Donald Trump winning the upcoming election?

10 Scriptures That Show The Bible Is Mythology