By Eugene M. Macdonald | May 2015 Issue
The Truth Seeker

In the 1880s, the world’s freethinkers adopted Italian philosopher Giordano Bruno as one of their martyrs. A victim of the Roman Inquisition, Bruno was burned at the stake in 1600 for his heretical views. In an effort to honor Bruno, freethinkers mounted a campaign—spearheaded in America by The Truth Seeker—to build a monument in Rome near the Vatican. In 1889, the Giordano Bruno monument was unveiled amidst frenetic protest by the Roman Catholic Church. The Vatican vehemently opposed any monument honoring Bruno, especially one erected on the spot where they burned the freethought martyr. Pope Leo called the effort a “sacrilegious deed.”

It was the Inquisition of Venice, in Italy, that brought Giordano Bruno, astronomer, philosopher, and Freethinker, to the stake. Bruno (born in 1548) chose the church as what he supposed was the least of three evils, the two others being the law and the army. He found that his choice was the worst he could have made.

In the pursuit of his studies Bruno stumbled against the dogmas of the Trinity, Transubstantiation, and the Virgin Birth. He discussed these subjects with his brother monks of the convent of St. Domenico Maggiore, Naples. Reaching heterodox conclusions, he was proceeded against by the maser of the novices. Again, when in full orders, the father provincial fell upon him with accusations of heretical tendencies, and realizing the grave danger of a second process against a relapsed heretic, he fled from Naples and took the road to Rome. Here he learned that the accusation would soon follow him, and made his way to Genoa. He found no place to rest. His wanderings led him to Geneva, the home of Calvinism, where he discovered shortly that Protestantism was as narrow as Romanism. “The two churches,” as Bartholmess says, “were governed by the same principle of jurisdiction – the criminality of heresies. Whoever believed wrongly, that is to say, otherwise than the Holy Office or the Venerable Consistory, believed nothing; and he who believed not committed the crime of treason to God, and deserved capital punishment. Persecution hence became a sacred duty, an act agreeable to God. The greater its intolerance, the greater its value.”

The town where Michael Servetus had been burned for heresy was no place for Giordano Bruno, so he moved on. For fifteen years he wandered, lecturing, teaching, supporting himself as a proof-reader at times, and occasionally publishing his writings. He fled from Toulouse in France to escape the fate which later overtook Vanini. His last position abroad was that of lecturer in the Helmstedt University, which he quit under excommunication, coming in 1590 to Frankfort. The following year, a young Venetian named Mocenigo, of noble family but superstitious and of weak intellect, fell in with some of his books. Having dabbled in the “occult” and concluding from his writings that Bruno had in reserve a large amount of esoteric lore, Mocenigo prevailed upon Bruno to come to Venice and instruct him.

With a calamitous want of caution, Bruno returned to the land of his birth and placed himself at the disposal of his pupil, even taking up his abode in Mocenigo’s house.

Between the light-hearted Freethinker and the gloomy fanatic there was no common bond. Mocenigo became mistrustful that Bruno’s teachings were heretical, and confided his suspicions to a priest, his confessor. The latter advised him to ascertain Bruno’s errors fully, and then denounce him to the Inquisition. To the discredit of humanity, Mocenigo played the spy on the man whose confidence he had gained, and whom he had taken into his home. The denunciation was formally made by letter May 23, 1592.

A few days prior to this act of treachery on the part of his pupil, the suspicions of Bruno had been aroused by questions put with the obvious purpose of drawing out answers that would convict him of heresy. This determined him to return to Frankfort, and he gave notice to Mocenigo that the engagement between them had terminated. Mocenigo persuaded and threatened; Bruno persisted. Then Mocenigo showed how religion could transform a weak-minded sneak into a blood-thirsty zealot by calling to his aid a band of ruffians and locking his friend and teacher in an attic room. He followed this dastardly act by sending his letter of denunciation to the Inquisition, which immediately responded with an officer, and on the night of May 23 Bruno occupied a dungeon of the Inquisition.

The inquisitors practiced upon the trusting nature of Bruno the policy of pretended kindness that was framed in the subtle mind of the Dominican Eymerich. They treated his assumed errors as though they were accidental, if actual, aberrations from the faith, and by meeting him half-way with concessions drew from him admissions that were fatal. What Bruno admitted was set down; what his judges conceded was not recorded. Accepting their hypocritical blandishments and professions of interest in good faith, he opened his mind to them as to confidential friends. With a baseness engendered by their creed and calling, they drew him out, even as Mocenigo had done before them, until, by seeming to agree with him, they had learned what he believed. Then the trap was sprung and the frank and candid Freethinker fell a victim to inquisitorial cunning. He had said enough to hang him.

The world had never heard Bruno’s version of the proceedings. The documents preserved in the archives of the Inquisition, written by the clerk or notary of the tribunal, represent that at the end of his second examination, May 30, 1592, he expressed some regret that in his works he had discoursed too much as a philosopher and not enough as a good Christian. On June 3 he told his judges, as they are pleased to let the world know, that he “detested and abhorred all the errors he had committed up to the present time against the Catholic faith, all the heresies he had held and the doubts he had entertained respecting the belief and dogmas of holy church,” adding, “I repent of having done, held, said, or believed things not Catholic, or doubted things Catholic, and I implore this sacred tribunal, in pity to my infirmity, to receive me into the church, providing for me remedies useful for my salvation, and to have mercy upon me.” The documents offered by the inquisitors as a record of the proceedings state that Bruno made further professions of repentance, and finally fell upon his knees before his judges, humbly asking their pardon and promising reformation if his life were spared.

There are several ways of accounting for these confessions. They may have been secured in return for a promise of freedom, or they may have been extorted by torture with rack and fire, or they may be spurious. If genuine, and if drawn forth by torture, they reflect no discredit on Bruno. He did not place upon martyrdom any such value as fanatics do, and he had not been deluded by excited preachers into the belief that if he accepted life from the inquisitors in return for apology and confession, he would be damned by his god. He was under no obligation to keep faith with a nest of thieves and robbers like the Inquisition.

What the Venetian Inquisition would have done with Bruno we do not know, for as a personal favor to the pope he was extradited to Rome, where the chief inquisitor, Cardinal Sanseverino thirsted for his blood. Thus committed to the Inquisition prison of the holy city, we hear no more of him for nearly eight years. What he suffered in that time has to be left to the imagination. How often they stretched him upon the rack, or brought him to the pulley or the fire, in the attempt to change the great Freethinker into that combination of bigotry, hypocrisy, and superstition called a Christian, no historian can say. The pall of silence fell upon those proceedings long ago.

In 1599 Bruno came before a congregation of sixteen cardinals and other church dignitaries, where eight heretical propositions culled from his writings by the infamous Bellarmine were presented to him for recantation. They drew from him only the reply that “he neither ought nor wished to recant.”

His last appearance but one before the tribunal took place in December of that year, when in spite of punishment and promises, he steadfastly maintained his views. The tribunal then and there declared him to be “an impenitent and obstinate heretic,” to be turned over to the secular arm. As a final act the inquisitors denounced his obstinacy in a long harangue, which he heard unawed, invested him in the heretic’s coat, the sanbenito, and imposed the sentence of death. Bruno had maintained a contemptuous silence until now. Then he spoke.

“I expect,” he said, “that you are more afraid to pronounce that sentence than I am to receive it.”

He was brought forth for the execution of his sentence on Thursday, Feb. 17, 1600, the place of punishment being the Campo di Fiora, a square in front of the pope’s residence. The stake had already been erected. To this he was bound. The executioners kindled the fire, while the inquisitors thrust the crucifix before his gaze; he averted his face with an angry glance.

The crowd hooted the martyr then; but to-day the crowd knows who were the infamous, who were the beasts, who were the monumental criminals of their day; they were the pope, the cardinals, and the inquisitors who destroyed the body of the great Freethinker whose mind they could not conquer.

A statue of Bruno, erected by Freethinkers in 1889, stands now on the spot where he was burned in 1600.

Reprinted with permission from the Truth Seeker.

Excerpt from “A Short History of the Inquisition, what it was and what it did: to which is appended an account of persecutions by Protestants, persecutions of witches, the war between religion and science, and the attitude of American churches toward African slavery” by Eugene M. Macdonald. Published by The Truth Seeker Company, 1907.

For nearly a century and a half, the Truth Seeker has promoted women’s rights, birth control, free speech, science, separation of church and state, and exposed religion as against reason. It counted among its illustrious subscribers and progressive writers Elizabeth Cady Stanton, Mark Twain, Thomas Edison, Clarence Darrow, and Robert Ingersoll. Each elegantly designed issue of the Truth Seeker offers a unique blend of contemporary, thought-provoking editorials and historical Freethought articles, archival photographs, irreverent cartoons, along with book and film reviews. A high-definition video preview of each January, May, and September issue is online at thetruthseeker.net. 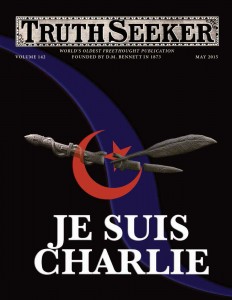 The May 2015 issue, dedicated to Free Speech, includes: