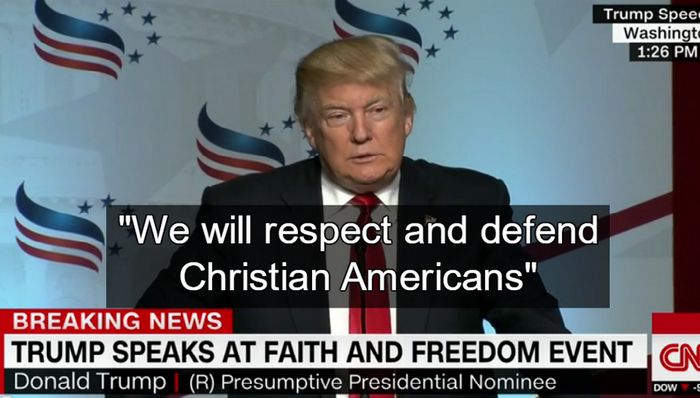 It’s no secret that the Republican party is actively trying to turn this nation into some form of theocracy. Well, at least socially. The GOP is some kind of hybrid where their economic ideologies are based on the philosophies of Ayn Rand (a devout atheist) while their social ideologies are based on some warped view of Christianity that I call “Republicanity.” You might be saying to yourself, “It doesn’t make any sense for a political party to base their economic ideologies on someone who didn’t believe in religion while supporting social issues based on religion.”

And you would be right. It makes absolutely no sense. Which is another reason why I don’t consider most of these people actual Christians.

But beneath this continued push to turn the United States into a theocracy lies a much deeper, more dangerous movement that most people aren’t aware of. This movement is called the “7 Cultural Mountains,” or is sometimes referred to as the “7 Mountains Dominionism.”

What is this, you ask? Well, it’s an effort to place “Christian” control over seven areas of our lives these radicals have labeled as “pillars of society.”

In 1975, Bill Bright, founder of Campus Crusade, and Loren Cunningham, founder of Youth With a Mission, had lunch together in Colorado. God simultaneously gave each of these change agents a message to give to the other. During that same time frame Francis Schaeffer was given a similar message. That message was that if we are to impact any nation for Jesus Christ, then we would have to affect the seven spheres, or mountains of society that are the pillars of any society.

These seven mountains are business, government, media, arts and entertainment, education, the family and religion. There are many subgroups under these main categories. About a month later the Lord showed Francis Schaeffer the same thing. In essence, God was telling these three change agents where the battlefield was. It was here where culture would be won or lost. Their assignment was to raise up change agents to scale the mountains and to help a new generation of change agents understand the larger story.

This website is designed to help educate those who wish to become change agents in culture for Christian values and to connect like-minded men and women for a common vision.

Basically, two people got together for lunch and claimed to have “simultaneously” received a message from God. Around the same time another individual was also given a similar message. That message basically being that Christianity should control seven key areas of society.

These are the people who literally think they speak to God.

It’s also the underlying message behind much of what the Republican party — in particular tea party Republicans — are pushing for.

Politicians that openly speak about receiving messages from God, basing campaigns on injecting religious beliefs into their policy making and believe that this nation was founded on Christian principles (Government). Social policies which are crafted based on religious ideology that define what constitutes a marriage and when life is created (Family). A government controlled by people who believe this nation is a Christian nation (Religion). The continued push to cut funding for public education to such low levels that private school is the only alternative for a decent education. Private schools which are often religiously based (Education). They constantly attack any and all media entities that don’t agree with them, while perpetuating the belief that only their media can be trusted (Media). They’re heavily backed by radical right-wing billionaires, many of whom advocate for open discrimination in the workplace based on religious beliefs (Business). Then they often blame gun violence on video games, claiming it’s entertainment (not guns) that needs more regulative control (Arts and Entertainment).

If you don’t believe this movement has already worked its way into our government, you’re fooling yourself. And as the tea party continues to gain power within the Republican party, this movement will only grow in influence.

Now, I don’t know about you, but I’m absolutely terrified by the thought of this. Some radical, right-wing religious movement based on the idea that three individuals simultaneously received a message from God hoping to force religion into seven major aspects of everyone’s life.

And this isn’t just some radical movement that can be easily dismissed. There are prominent figures in American politics right now that subscribe to the “7 Mountain” ideology. Of course they won’t admit that this is their plan, because it would freak out everyone who isn’t some right-wing radical. However, if they slowly continue to inch their way into the mainstream, they’re hoping we don’t realize what it is they’re trying to do.

It’s the escalated attack on a woman’s right to have control over her own body. It’s new voter ID laws that disenfranchise voters who often don’t vote for these radical right-wing politicians. It’s attacking any and all media sources as “left-wing propaganda” if they don’t spread the message of the GOP. It’s trying to have a Constitutional Amendment which defines what is or isn’t a marriage. It’s saying there’s such a thing as a “traditional family,” a definition that’s pulled from their religious beliefs.

It’s just a whole host of issues they’ll continue to chip away at, hoping to eventually gain victory before they push forward with their “conquering of the 7 mountains.”

And if liberals don’t become more aware of this — and fight against it — this is the future we’re going to end up facing.

Which is something that should terrify ever liberal in this country.