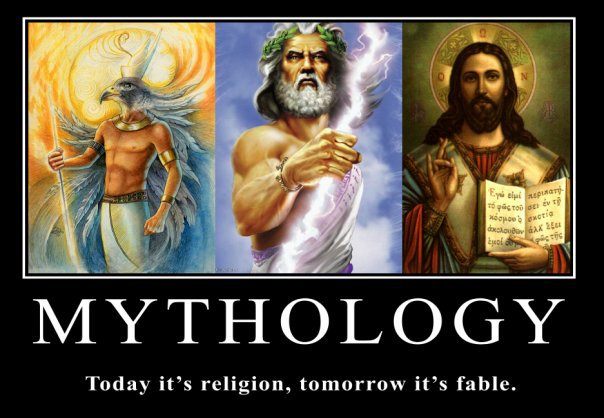 Mythology is defined: “a traditional or legendary story, usually concerning some being or hero or event, with or without a determinable basis of fact or a natural explanation, especially one that is concerned with deities or demigods and explains some practice, rite, or phenomenon of nature.”

There are hundreds of scientifically and historically inaccurate statements in the Bible. The story of creation in Genesis contradicts science. The universe is not 6000 years old, and there was never a magic garden guarded by a flaming sword. Samson’s magical hair didn’t give him the strength to kill hundreds of people with the jawbone of a donkey. Jonah didn’t survive in the belly of a whale for 3 days. There have never been pillars of fire, parting oceans, water turning to blood, talking donkeys or snakes, fruit that gives you eternal life, supernaturally burning bushes, zombies or evil spirits. And prayer doesn’t work.

Christians point to human sacrifices, talking animals, magic and scientifically inaccurate statements in other religions to prove they’re mythologies. Yet when Christianity does the exact same thing, they turn a blind eye. That’s called denial. By Christians’ own standards, Christianity is mythology.

2. Yahweh is the personification of the ancient Jew’s primitive values.

The Old Testament gives the creator of the universe two Jewish names: Yahweh and Elohim. And God is a male who doesn’t value women but does value winning land for His chosen people in bloody warfare. He wants us to kill disobedient children, own slaves, buy and sell wives, and stone people for having sex outside of the traditional Jewish mating rituals. According to Him, women can’t be touched when they’re on their period, because that makes them spiritually unclean. Men can’t cut their sideburns, but they have to cut off their foreskin. There is no way these attributes of God are anything but the projections of a primitive culture.

The Bible proves itself to be a manifestation of the writer’s pre-existing values again in the New Testament. Yahweh didn’t change his nature or his mind between the time of Abraham and Jesus. The Jewish culture evolved naturally over thousands of years until its nomadic, barbaric origins were incompatible with its new urban, culturally diverse values. Conveniently, a new hero appeared at that time and said Yahweh’s nature had changed to reflect the Jewish people’s new hopes and dreams for salvation from the Romans. And that hero was unsurprisingly born of a virgin on a day of astrological significance who went on to die and rise from the dead after three days…a common pattern in textbook mythology. And even though Jesus changed a lot of rules, he still approved of slavery. That’s not because the creator of the universe approves of slavery. That’s because the human beings who wrote the Bible approved of slavery.

Let’s back up a few thousand years and look at the rest of the story. The creation story in Genesis ends with one man and one woman (with zero bellybuttons) walking and talking with Yahweh in a magic garden where they’re tricked by a talking snake into eating a magic fruit that Yahweh put in front of them and told them not to eat. Then, when the man and woman fell for Yahweh and Satan’s two-man-con, Yahweh threw them out of the garden and left a magical flying, flaming sword to keep them from coming back into the garden. It stayed there until Yahweh got angry and flooded the world.  Plus, as an added insult to women, (and in classic misogynist mythology style) caused women to feel pain in childbirth as punishment for being duped by Satan.

As the years passed, Yahweh gave the cursed incestual descendants of Adam and Eve more and more primitive rules to follow. In order to atone for being cursed or breaking God’s rules people had to go to a massive temple that God literally lived in and kill an animal, which they could conveniently buy from the priest class for an extortionate fee. Sometimes these animals were burnt, and sometimes they were bled out over a stone altar. The more rules the Jews broke or the more favor they wanted with Yahweh, the more animals’ blood they had to spill.

Now, I challenge every Christian to stand in front of a room full of non-Christians and explain why Yahweh, the creator of the universe, needed blood sacrifices to make Him happy. Then explain how Christianity is more credible than all the other mythologies throughout history that we dismiss as mythology because their Gods required blood sacrifices to appease them.