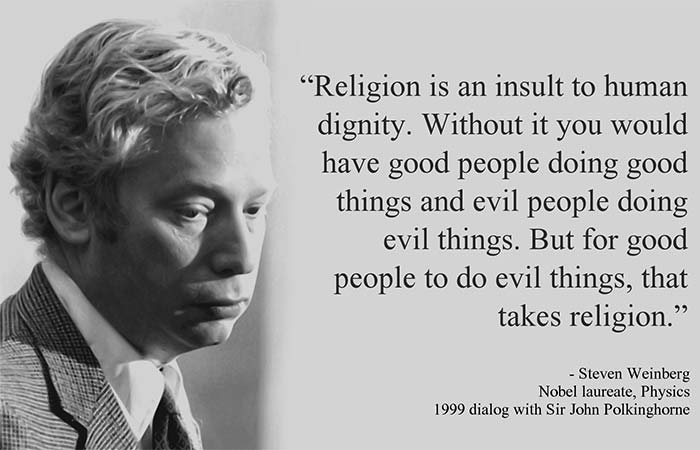 The extent of my ignorance can fortunately be slightly ameliorated by my access to my computer! One of my frequent email correspondents recently sent me a Steven Weinberg quote which so fit my bias, gleaned from decades of painful confrontation with the Roman Catholic Church hierarchy as they continue to crusade against women’s reproductive rights:

So who is Steven Weinberg? I am sure my readers know—this is after all a website for hugely bright and well informed participants if you simply look at this site’s proud list of Honorary Associates.

Wikipedia tells us that,

Steven Weinberg (born May 3, 1933) is an American theoretical physicist and Nobel laureate in Physics for his contributions with Abdus Salam and Sheldon Glashow to the unification of the weak force and electromagnetic interaction between elementary particles.

He holds the Josey Regental Chair in Science at the University of Texas at Austin, where he is a member of the Physics and Astronomy Departments. His research on elementary particles and physical cosmology has been honored with numerous prizes and awards, including in 1979 the Nobel Prize in Physics and in 1991 the National Medal of Science. In 2004 he received the Benjamin Franklin Medal of the American Philosophical Society, with a citation that said he is “considered by many to be the preeminent theoretical physicist alive in the world today.” He has been elected to the US National Academy of Sciences and Britain’s Royal Society, as well as to the American Philosophical Society and the American Academy of Arts and Sciences.

(His full Wikipedia bio is well worth reading. https://en.wikipedia.org/wiki/Steven_Weinberg#Biography)

As the world moves thunderously close to oblivion, Weinberg’s other quotes add sting after sting to the mindless cow-towing of the laities to the strictures of organized religious orthodoxy. The RCC faithful may no longer not eat meat on Friday or use only the rhythm method, but building hate among its adherents toward those in the LGBT community or hating those who would support women’s right to choose an abortion definitely emanates from the pulpits not only of the RCC but also from many other organized religions. Organized for whom one must wonder with awe??

A few more Weinberg quotes. Here’s one with a slightly different first sentence:

“All logical arguments can be defeated by the simple refusal to reason logically.”
—Steven Weinberg, from Dreams of a Final Theory

“The effort to understand the universe is one of the very few things that lifts human life a little above the level of farce, and gives it some of the grace of tragedy.”

“The more the universe seems comprehensible, the more it also seems pointless.”

“Frederick Douglass told in his Narrative how his condition as a slave became worse when his master underwent a religious conversion that allowed him to justify slavery as the punishment of the children of Ham. Mark Twain described his mother as a genuinely good person, whose soft heart pitied even Satan, but who had no doubt about the legitimacy of slavery, because in years of living in antebellum Missouri she had never heard any sermon opposing slavery, but only countless sermons preaching that slavery was God’s will. With or without religion, good people can behave well and bad people can do evil; but for good people to do evil—that takes religion.”

“Many of the great world religions teach that God demands a particular faith and form of worship. It should not be surprising that SOME of the people who take these teachings seriously should sincerely regard these divine commands as incomparably more important than any merely secular virtues like tolerance or compassion or reason.

Across Asia and Africa the forces of religious enthusiasm are gathering strength, and reason and tolerance are not safe even in the secular states of the West. The historian Huge Trevor-Roper has said that it was the spread of the spirit of science in the seventeenth and eighteenth centuries that finally ended the burning of the witches in Europe. We may need to rely again on the influence of science to preserve a sane world. It’s not the certainty of the scientific knowledge that fits it for this role, but its UNCERTAINTY. Seeing scientists change their minds again and again about the matters that can be studied directly in laboratory experiments, how can one take seriously the claims of religious traditions or sacred writings to certain knowledge about matters beyond human experience.”

“It does not matter whether you win or lose, what matters is whether I win or lose!”

(Certainly the main point of view of those who seek to use or retain religious power in the secular world.)

“It used to be obvious that the world was designed by some sort of intelligence. What else could account for fire and rain and lightning and earthquakes? Above all, the wonderful abilities of living things seemed to point to a creator who had a special interest in life. Today we understand most of these things in terms of physical forces acting under impersonal laws. We don’t yet know the most fundamental laws, and we can’t work out all the consequences of the laws we do know. The human mind remains extraordinarily difficult to understand, but so is the weather. We can’t predict whether it will rain one month from today, but we do know the rules that govern the rain, even though we can’t always calculate their consequences. I see nothing about the human mind any more than about the weather that stands out as beyond the hope of understanding as a consequence of impersonal laws acting over billions of years.”

“There are those whose views about religion are not very different from my own, but who nevertheless feel that we should try to damp down the conflict, that we should compromise it. … I respect their views and I understand their motives, and I don’t condemn them, but I’m not having it. To me, the conflict between science and religion is more important than these issues of science education or even environmentalism. I think the world needs to wake up from its long nightmare of religious belief; and anything that we scientists can do to weaken the hold of religion should be done, and may in fact be our greatest contribution to civilization.”

“Maybe at the very bottom of it… I really don’t like God. You know, it’s silly to say I don’t like God because I don’t believe in God, but in the same sense that I don’t like Iago, or the Reverend Slope or any of the other villains of literature, the god of traditional Judaism and Christianity and Islam seems to me a terrible character. He’s a god who will… who obsessed the degree to which people worship him and anxious to punish with the most awful torments those who don’t worship him in the right way. Now I realise that many people don’t believe in that any more who call themselves Muslims or Jews or Christians, but that is the traditional God and he’s a terrible character. I don’t like him.”

“I’m offended by the kind of smarmy religiosity that’s all around us, perhaps more in America than in Europe, and not really that harmful because it’s not really that intense or even that serious, but just… you know after a while you get tired of hearing clergymen giving the invocation at various public celebrations and you feel, haven’t we outgrown all this? Do we have to listen to this?”

“I have a friend—had a friend, now dead—Salam, a very devout Muslim, who was trying to bring science into the universities in the Gulf states and he told me that he had a terrible time because, although they were very receptive to technology, they felt that science would be a corrosive to religious belief, and they were worried about it… and damn it, I think they were right. It is corrosive of religious belief, and it’s a good thing too.”

“[R]eligions of the Roman Empire ‘were all considered by the people, as equally true, by the philosopher, as equally false, and by the magistrate, as equally useful.’”

—Steven Weinberg, To Explain the World: The Discovery of Modern Science

To conclude these wise Weinberg quotes, it is clear from the historical record that frequently if not always “organized” religions are focused on keeping their recipients in intellectual and material bondage. If one looks at the situation today in the US, the most sophisticated religious leaders come from the RC hierarchy—after all they come from a 2000 year history of secular manipulation—but this same hierarchy has also ruthlessly and skillfully co-opted some among the Tea Party Evangelicals so that many of those in that powerful bloc see the RC morality play (e.g. anti LGBT, pro-life, anti contraception presented as good family values) as being in sync with their best interests, when in fact both laities in both religions are helping drive our country into divisions which make for hatred and disharmony.

My correspondent who offered me that first Weinberg quote above followed by noting his experience as a Peace Corps Volunteer in a highly Catholic country. “The good Catholics often had 18 children in the family and the surplus (from the love of life) was deposited on the landfill. The rest fought for land in brutal bloodshed. All for the love of life.”

Trump/Biden: Only 61 Days To Go