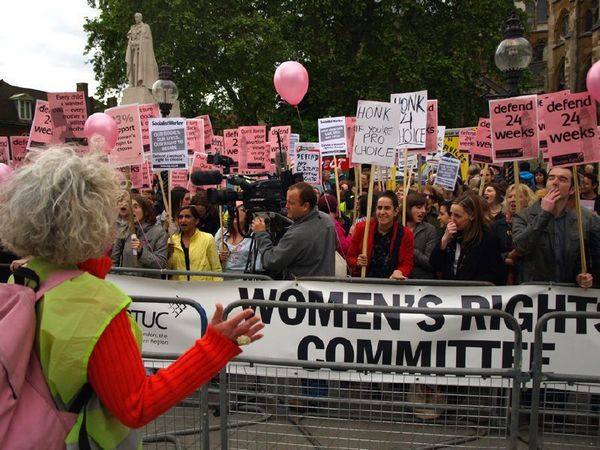 This past Friday, Tennessee Governor Bill Haslam signed the deceptively named “Tennessee Infants Protection Act,” a bill that does nothing for infants but prohibits physicians from performing abortions after the 20th week of pregnancy. Tennessee Republicans blocked all efforts from Democrats to include exceptions for incest, mental health, or even rape. (After all, if a woman is raped, GOP lawmakers say it must be God’s will.)

The “pro-life” movement has never been about “life,” it has, and always will, be about control. Control over a woman’s reproduction—taken from the individual and given to GOP legislators, like Republican Billy Long. The entire movement has been a scam from its inception: it all began with a single disingenuous conference call to come up with ways to gin up support for segregationist Bible colleges. Up until that point, churches didn’t have any problem with it. Why should they? The Bible says nothing about it. Even though abortion was practiced way back in Jesus’ time, He never said one word about it.

Yet when the Tennessee law was debated, among the countless other patriarchal attacks on women, I hear the same tired argument over and over again. I hear it in other statehouses, including my own, whenever the GOP tries to regulate women’s pregnancies. Unfortunately, I always see Democrats trying to argue on their terms, and falling for the same trap. So let’s talk:

As many of you know, I live in a conservative paradise: no services, few jobs, and guns—lots of guns. The same rednecks who brag about mowing down a family of deer or discussing their fantasies of killing folks they don’t like are always the same ones getting on their soapbox about the sanctity of life when it comes to abortion. One of my neighbors went on and on about “killing babies”—right after he made a joke about what to name a dead Syrian toddler. (I won’t repeat it. I couldn’t even pretend to like him after that. )

A politician isn’t usually that blatantly crass. (Although the new Trump-era GOP politicians are really testing the waters.) But they all make the same argument that frames it very black and white: God makes the baby, and the evil woman kills the baby. (After all, she is just an empty vessel.) The zygote, however, is no different to them than an infant. To them, terminating a pregnancy—even if the cells are smaller than a dot (.)—is exactly the same thing as strangling a newborn baby. It’s crazy, but that’s how they think. Arguing with any rightwing politician or supporter with this kind of framing is a losing proposition every time.

Why? Because with this kind of framing, they always are on the side of “saving the infant’s life,” and any argument to the contrary—rights, reproductive freedom—can always be framed that we want to end it. I don’t play that game at all, and neither should you. Stop arguing with them over the issue of abortion itself, but on whatever the offending legislation is. There is a BIG difference.

Whatever the offending legislation is, it will always be about making it more difficult to get an abortion. The problem I can always point out is that the legislation never achieves the primary objective of preventing a woman from getting an abortion in the first place. You see, wealthy women will go where it is legal. Women of lesser means will still make the cost-analysis that it will be cheaper in the long run even if they have to travel quite far. Poor women will do something drastic. You may make it more difficult, but you won’t stop abortion.

The entire irony of the pro-life movement is that even if they achieve their ultimate objective—overturning Roe v. Wade—abortion will still be available somewhere. Furthermore, like it or not, we are rapidly approaching an era where women won’t have to travel anywhere to have an abortion. It will soon be possible for woman to ingest medication to stop her pregnancy in her own home. Trust me, when that happens, you can pass every stupid law you want, but it won’t stop.

No, if you really and truly believe that abortion is murder, and you really and truly want it to stop, there is only one way to do it. However, it entails the one thing that the religious right has never, ever been willing do to: make it easier for the woman to have the baby.

Fight outrageous daycare fees, and support programs that make daycare affordable. Ensure the child has healthcare, and at the very least, stop trying so damn hard to block food stamps for the baby!

Make it easier (and cheaper) for parents to adopt. Get women the help they need to support their baby—and abortion rates will drop dramatically, far more than any legislation ever could.

Is this really about stopping abortion? Then how about initiatives to give these women a hand in their desperate situation. This will not only solve the problem, it’s the “Christian” thing to do. Besides, if you force a woman to bear child, shouldn’t you make sure you allow her some means to take care of the child? No?

Sure, at this point, we then argue about tax dollars going to provide for the most basic necessities for an infant to survive—but see what I did there? The high ground they claimed is gone. Wait, weren’t you just talking about the sanctity of life? I’m trying to save a born infant’s life and NOW you are telling me that if he/she dies it’s “not your damn problem”?? (Those were the exact words used, BTW.)

How “Christian” of you.

Of course, this has never been about stopping abortion. It’s the exact same reason the religious right opposes comprehensive sex education and access to contraception—two other ways to stop abortion. This is all really about control—control of the woman.

If you want to argue for legislation to do that, I can’t stop you.

But I damn sure am not going to let you claim the moral high ground on it, either.