This post by Christina Speck originally appeared at Freethought Today.

There is a dangerous and pervasive movement to make America a theocracy and to return it to the fictitious “Christian roots” from whence it supposedly came. The mythology of our forefathers crafting a Christian nation for the purpose of free worship is deeply skewed and must be dispelled.

Many people point to the founders’ religious affiliations as evidence of deep religious motivations for their actions. Others take it a step further, saying they were endowed with a “divine purpose.” As these men are no longer around to shed light on this debate, we should let their words speak for themselves.

Thomas Jefferson, the man who coined the phrase “separation between church and state,” said, “Religions are all alike — founded upon fables and mythologies.” John Adams wrote, “The divinity of Jesus is made a convenient cover for absurdity.” James Madison insisted, “In no instance have … the churches been guardians of the liberties of the people.”

Any concerns about context or connotation can be alleviated with the conciseness of a lesser-known axiom, “Lighthouses are more helpful than churches,” courtesy of Benjamin Franklin. Thomas Paine continues to be a thorn in Christian revisionists’ sides as well, with numerous documented accounts describing his open contempt for Christianity.

The Constitution is what unequivocally protects us from a theocracy.

Our forefathers, in fact, realized the insidious nature of religion in government and took many measures to keep it out. It is now our job to uphold them.

To counter this increasingly popular view of America’s beginnings, one must examine the documents that are the very core of this country: the Declaration of Independence, the Constitution and the Pledge of Allegiance. The phrase, “endowed by their Creator with certain inalienable rights,” in the Declaration of Independence is a favorite for the Christian heritage crowd. But Jefferson’s original words, “All men are created equal and independent. From that equal creation they derive rights inherent and inalienable,” make no mention of any creator at all. This carefully chosen wording did not make it to the final draft after congressional revisions.

In the Constitution, some re­ferences to religion are coyer, while others are obvious safeguards against entangling church and state. One such barrier is in the First Amendment, “Congress shall make no law respecting an establishment of religion, or prohibiting the free exercise thereof.”

While the Establishment Clause clearly states that America indeed has no established religion, James Madison’s initial proposal of this amendment removes any remaining ambiguity: “The civil rights of none shall be abridged on account of religious belief or worship, nor shall any national religion be established, nor shall the full and equal rights of conscience be in any manner, or on any pretext, infringed.” 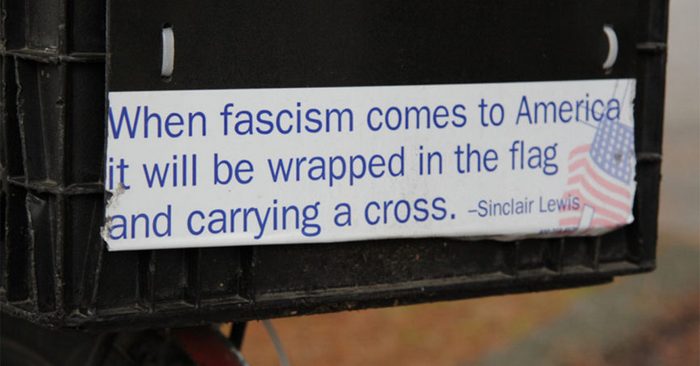 With regard to holding office, Article 6 states, “No religious test shall ever be required as a qualification to any office or public trust under the United States.” Supposedly, this protects candidates from discrimination based on their religion, or lack thereof.

A subtler irreligious reference is found in the original presidential oath: “I do solemnly swear (or affirm) that I will faithfully execute the Office of the President of the United States, and will, to the best of my ability, preserve, protect and defend the Constitution of the United States.”

By including “or affirm,” the Constitution includes those who are without a higher power to “swear” to. Despite all constitutionally mandated separation, the most prevalent American oath, the Pledge of Allegiance, openly acquiesces to service and commitment “under God.” This can in no way be interpreted as indicative of religious intentions from the author, as the phrase was added over 60 years later as propaganda to separate us from our communist (and atheist) enemies during the 1950s. Francis Bellamy’s original version reads, “I pledge allegiance to my Flag and the Republic for which it stands, one nation indivisible, with liberty and justice for all.”

While the Declaration of Independence and the Pledge of Allegiance are both important, the Constitution is what unequivocally protects us from a theocracy. But regardless of the protections in Article 6, several state laws do not allow anyone who does not acknowledge a supreme creator to be elected. The Texas Constitution, for example, says, “No religious test shall ever be required as qualification to any office, or public trust, in this State; nor shall anyone be excluded from holding office on account of his religious sentiments, provided he acknowledge the existence of a Supreme Being.”

Tennessee, South Carolina, Pennsylvania, North Carolina, Mississippi, Maryland and Arkansas all similarly discriminate. Some state laws, such as Arkansas, even allow for the testimony of a witness to be dismissed based on their lack of religious belief: “No person who denies the being of a God shall hold any office in the civil departments of this state, nor be competent to testify as a witness in any court.”

With a new fundamentalist movement growing in size and political strength, it is imperative we do not shirk our responsibilities as secular Americans. The wall between state and church is under attack, and it is our duty to fiercely protect it. It is our job as freethinkers, humanists and atheists to defend the real history of this country by reinforcing this separation and our rights as nonbelievers before both cease to exist.

As Thomas Paine said, “It is necessary to the happiness of man that he be mentally faithful to himself. Infidelity does not consist in believing, or in disbelieving; it consists in professing to believe what one does not believe.”