This is an excerpt (without footnotes) from The Lucifer Principle: A Scientific Expedition into the Forces of History by Howard Bloom (Atlantic Monthly Press, 1997). Reprinted by permission from the author.

Control and the Urge to Pray

Religious leaders in the distant past capitalized far more avidly than doctors on man’s addiction to control. During the eleventh century, a battle raged over who would hold supreme authority in Europe. The leading contenders were the Holy Roman emperor and the pope. The emperor commanded massive armies and treasuries overflowing with wealth, and he had the loyalty of noblemen spread over a vast distance. The pope, too, had his treasury and armies, but he possessed a tactical weapon of a kind no emperor could match: the illusion of control.

In the two hundred years since Charlemagne, the Holy Roman emperors had lorded it over the popes. To ascend the papal throne, a candidate was forced to obtain the emperor’s permission. And just to make his subservience crystal clear, the newly elected pope underwent a solemn ceremony in which he was handed his symbols of power by the emperor himself. The ceremony telegraphed the message that in heaven the pope may derive his authority from God, but on earth, he receives it from the Holy Roman emperor.

In 1073, a gentleman won the papal election who was not willing to take this procedure lying down. His name was Hildebrand (later known as Pope Gregory VII). Hildebrand wanted to make the Church answerable only to the dictates of God. In other words, he was dead set on elevating the Church’s power over that of the emperor.

Hildebrand had a reputation for never sidestepping a good fight. The new pope started his reign with a virtual slap in the face to the Holy Roman Emperor Henry IV. The pontiff never bothered to arrange the elaborate ceremony in which he would humbly accept his crown from Emperor Henry. Instead, the new Holy Father simply took the throne himself. Then he sent a curt message to the emperor informing his abashed majesty of this fait accompli. Two years later, the pugnacious pope added insult to injury. Rulers had long enjoyed the privilege of appointing the bishops within the boundaries of their own realm. Hildebrand declared that this practice would immediately come to a halt. From now on, the church in Rome would make these appointments.

The gall of the new pronouncement was startling. Under Pope Hildebrand’s new system, religious officials would no longer be men the secular authority could count on for loyalty or cooperation. They would no longer be extensions of the king’s own bureaucracy. Instead, these powerful local figures would be virtual foreign agents. As if this weren’t bad enough, Hildebrand went out of his way to tweak the emperor’s nose. He excommunicated a few of the sovereign’s closest advisers. Then he demanded imperiously that His Majesty show up in Rome to “defend himself against charges of misconduct.”

This was about as much as Henry IV could take. The ruler finally decided to show the upstart pope just who was boss. Henry convoked a church synod within his territory—a synod of clerical figures loyal to himself. Under Henry’s guidance, the cooperative churchmen declared in no uncertain terms that Pope Hildebrand was fired. Then Henry sat back, smugly confident he had won. After all, how could an ecclesiastical prayer juggler stand up to a sovereign who commanded the greatest armies in Europe and could crush whole countries on the merest whim? But Henry had overlooked something.

The Vicar of Christ demonstrated that he, like the inhabitants of the village of the sorcerers, had a stranglehold over a weapon no mere king could command. Hildebrand excommunicated the population of Germany. In response, the German citizenry, fearing that their souls would be cast into eternal torment, so pressured their ruler that he was forced to travel to Canossa and stand barefoot in a snowy courtyard for three days begging the pontiff’s forgiveness.

Like the Kurumba sorcerers, the pope claimed command over forces that were invisible. He maintained that his priests had power over the hidden gateways that led to an unseen heaven and hell. With his influence over an unprovable realm, the pope claimed the right to control the uncontrollable.

The Medieval Church made substantial sums by selling its illusions. And indeed the phantasms pardoners peddled—control and hope—were vital to individual survival. (A study of 2,832 subjects by Robert Anda of the Centers for Disease Control showed that adults deprived of all sense of hope are four times more likely to die of heart disease.) In real life, the average serf was nailed to the land as Christ had been nailed to the cross. He was subject to famine and plague. The major decisions that affected his days were made by the lord of the manor. Periodically, a serf’s cottage was ravaged, his crops destroyed, his cattle taken, and his wife raped by the troops of a neighboring noble, a passing foreign military group, a band of brigands, or sometimes by the troops of his own king. The serf had no hope and he had no control.

But hope and control, as we’ve seen, are biologically necessary to both the immune system and the brain. The Church said this earthly life would be but a short period of torment followed by a stretch of time that counted infinitely more—an eternal afterlife. Only one in a thousand, said the Church, would make it to the golden gates of paradise. But that, at least, was hope. And there were ways to guarantee that you would be among those bound for heaven’s glory: you could show repentance for your sins; you could purchase pardons that brought you immunity to the results of your evil acts; you could share in the body and blood of Christ through the Communion offered by your local priest on a regular basis for a small fee; and you could go on a pilgrimage. No wonder the citizens of Germany found the pope’s excommunication intolerable. He was excluding them from hope, snatching away the only thing that made life tolerable. More to the point, he was depriving them of the fantasy of control, a necessary device for tricking the body into survival.

Religion continues to offer its minions that vital slice of delusion. Fundamentalists Anonymous—a group of former religious extremists who have bolted from the reactionary Christian movement—says that to the fundamentalist, Christ is a device for resolving every puzzle. Submission to religious authority, the fundamentalist believes, will give him control over the vagaries of life.

As we’ve seen before, modern fundamentalist leaders are following in the footsteps of Pope Hildebrand and attempting to translate their grip over the illusion of control into political power, using organizational entities like the Christian Coalition, the Christian Voice, the American Coalition for Traditional Values, the American Family Association, and the resuscitated Moral Majority to implement the “divine covenant” by which some ministers proclaim that God has destined his true believers to rule America. Like Pope Hildebrand in the eleventh century, fundamentalists have not been content to reign supreme in matters of the soul, for they would like to rule the earth.

The memes of magic, medicine, medieval Christianity, and modern fundamentalism offer an illusion that duplicates the health-giving force that saved a rat in a cage from harm. They hold out the illusion of power over the shocks and pains of life. 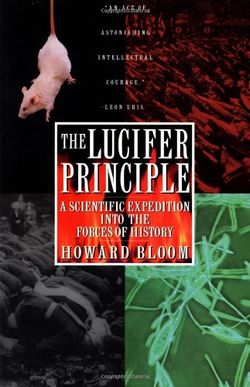 The Wild Rants of Howard Bloom: Challenges the Assumptions of Science

Can A Supreme Court Justice Be Impeached?