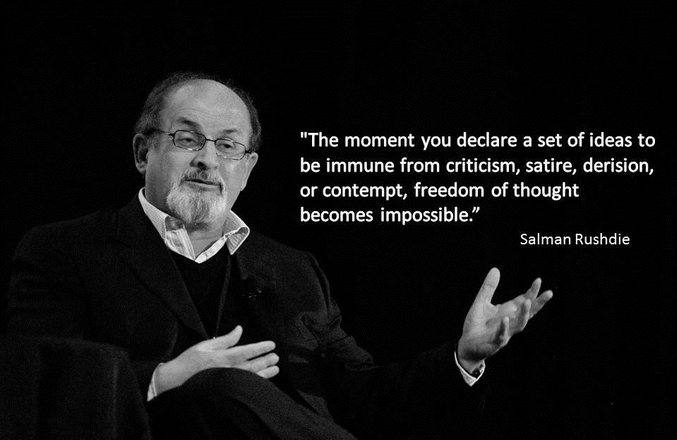 Religion is an idea.

But it’s an idea nonetheless.

And more importantly, religion is an idea that has successfully and thoroughly immunized itself from criticism. “Have some respect for what’s sacred” hears the authors who articulate their skepticism regarding religion and its tenets. Writers are forced to bite their lip just before expressing their genuine thoughts on the superstitious and irrational nature of religion, their fingers dangling just above the keyboard or their pen hovering above the paper. “No, it might get me in trouble” is what runs through the minds of numerous nonbelievers as they are dissuaded from being vocal about their lack of faith, convincing themselves that the freedom of speech can be put on hold. I myself am using a pseudonym while writing this article in order to preserve my anonymity, knowing fully that leaking my identity may place my life in danger in a country like Bangladesh.

Religion has become an idea that is actively shielded from critical prodding and probing. Demanding evidence for such extraordinary claims gets you labeled an “infidel”, “heathen”, “godless criminal”, and sometimes even (nonsensically) “racist.” Religion has managed to secure itself behind golden, barred doors. While this is not the case in many nations, it prevails in much of the world’s societies and communities.

I’m fond of placing the word blasphemy in quotation marks (like “blasphemy”) since the act of “blaspheming” entails that the person has committed some kind of a crime. And what crime has he or she committed? Criticizing religion. I find that laughable. I find it laughable that simply criticizing religion deservedly earns you death threats, or death itself. I find it laughable that organized religion has mangled the concept of skepticism and curiosity to make it seem like a “sinful” act. I find it laughable that an all-powerful deity would ever be offended  or disgraced or even intimidated by a mere human criticizing His holy book. I find it laughable that a god, if he really is as wise as he professes himself to be, will prefer us to blindly submit to him and believe every claim he makes on just the basis of faith, rather than analytically evaluating the word of God and using the sense of logic that He claims to have given us. Established religion spurs us to appreciate and use the wonderful gifts and abilities granted by God…except for the sense of reason and skepticism. No, when it comes to God, always suppress logic. Never doubt. Always believe.

Double standards have emerged in every society between genders, races, ethnicities, sexual orientations, et cetera. Unsurprisingly, when it comes to what society can and cannot openly discuss and criticize, double standards make themselves clear.

Let’s elaborate upon this point with a few obvious examples. It is free and easy to criticize someone’s taste in music, art, food, etc. There are entire careers and professions built around actively criticizing new albums, films, books, etc. Criticism of such products are not only allowed, it is encouraged and funded. Find me a decent newspaper that doesn’t have a full section devoted to scrupulously reviewing the latest products and movies.

The food service industry is bashed on a regular basis. Restaurants host food critics who eat their food, go home, and then write a scathing review that could potentially put restaurants out of business. Restaurants that are not open to criticism are often bashed as “fearful” and lacking confidence in their own services.

You may say that since religion is an concept, not a material product, the double standards for criticism are valid. But this is fallacious. If concepts are inherently protected from criticism, then peer review of scientific journals wouldn’t exist. If ideas should not be subjected to scrupulous skepticism and critical analysis, then any scientist, philosopher, or academic could simply publish their work and refuse to tolerate any objections to it, obnoxiously claiming that criticism undermines their idea and that no objections to their writings shall be permitted.

The double standards are hard to miss. The advocates of a certain non-religious philosophical ideology, perhaps a political opinion, are expected to defend their beliefs and withstand criticism. Many accept criticism warmly and alter their ideas for the better, realizing their shortcomings and adapting them in the face of emerging evidence. This is an attitude apt for a critical thinker genuinely aspiring to preserve intellectual integrity.

Contrast that with religion. The history of the Catholic Church, just as one example, is soaked in the blood of innocent civilians who questioned the authority imposed on them. The Inquisition sniffed out any skeptics and wiped them out of the populace. Bangladesh has amassed notoriety across the globe for its rise in the killing of bloggers who criticized religion. Even in a fairly moderate religious community, expressing dissuasion from certain religious principles will raise some eyebrows. Religion has misconstrued mindsets to make people accept that criticism of deep-held beliefs is wicked blasphemy and deserving of punishment. Parents are taught to dissuade their children from skepticism. God should not be questioned.

The Slippery Slope to Harassment?

Does the freedom to criticize religion open the gate to harassing and suppressing religious citizens? No, this slippery slope cannot conceivably be justified.

The freedom of speech entails the right to express your own thoughts, your own sentiments, without being dissuaded by the fear of an authoritarian force oppressing your mind and muffling your voice. It does not, however, permit the bullying of or prejudice against those who disagree with you. The freedom to be skeptical of religion should be established; however, the freedom to suppress or taunt religious people who have done no harm should not see the light of day. The former is a basic human right that gives rise to individualism and freedom of thought; the latter is an atrocity borne of hatred and prejudice.

Freedom of expression enriches society with a sense of pluralism and tolerance. The act of bullying or demonizing those who disagree with you only furthers hostility and breeds a poisonous and toxic environment.

The Danger That It Poses

The perpetuation of this anti-skepticism paradigm is not simply ridiculous and repulsive–it is immoral and dangerous. Teaching a child that he or she should accept an ancient book at face value without questioning, without doubting its authenticity, without asking questions such as why do I believe what I believe? or How is religion different from superstition?, is not a practice deserving of appraisal. Such a child will be reared to understand that the world is crafted from magic. Such a child will trust prayer to be an efficient method of reaching his or her goals. Such a child will derive his or her morality from their own interpretation of religion, paving the way for prejudice against non-believers, homophobia, and sexism. Some may believe that God deliberately placed “false” evidence of evolution across the globe (and in our genes) to “test our faith.” Others believe that scientists are all godless heathen crusading to remove God from everything by fabricating fairy tales such as the Big Bang Model and the nebular hypothesis.

These are just a handful of mindsets that have the potential to stem from placing unshakeable, unexamined faith in fables and moral precepts from outdated holy books. Allowing the perpetuation of such teachings too seep deeper into society without suffering criticism is not just an issue regarding the importance of scientific and logical thinking–but also a matter of ethics. Fundamentalist religiosity may breed loathing and suppression of disbelievers and the establishment of social codes that are deterrent to progress–such as the systematic oppression of gays, women, and dissenters.

Freedom of speech is a human right. Freedom of thought and expression lie at the heart of  a harmonious society. Suppressing a person’s right to give a voice to what they stand for undermines democracy itself.

Salman Rushdie on Charlie Hebdo: Freedom of speech must be absolute | Mashable