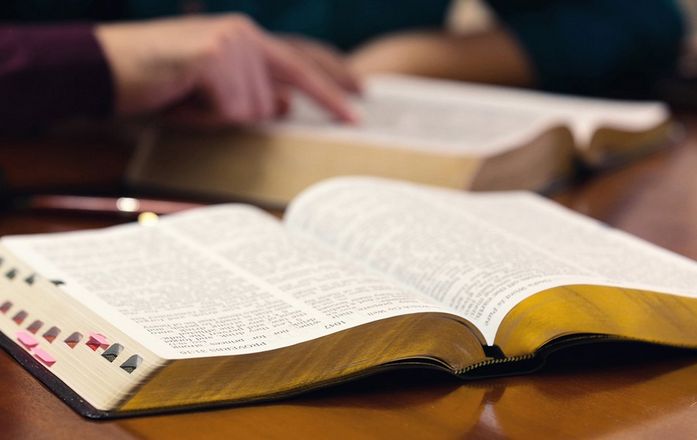 Adapted from When God Speaks for Himself: The Words of God You’ll NEVER Hear in Church or Sunday School, by Mark Tier and George Forrai (Inverse Books, 2016). Reprinted with permission from Mark Tier.

From Chapter 1: The Word of God?

“A thorough reading and understanding of the Bible is the surest path to atheism.”
— Donald Morgan

“Most people are bothered by those passages of Scripture they do not understand, but the passages that bother me are those I do understand.”
— Mark Twain

“Properly read, the Bible is the most potent force for atheism ever conceived.”
— Isaac Asimov

“All scripture is given by inspiration of God, and is profitable for doctrine, for reproof, for correction, for instruction in righteousness:”
— 2 Timothy Chapter 3:16

But the Bible is replete with contradictions and inconsistencies.

Jesus gives his sermon on the mount…

From Matthew Chapter 5[1]
1 And seeing the multitudes, he went up into a mountain: and when he was set, his disciples came unto him:

From Luke Chapter 6
17 And he came down with them, and stood in the plain, and the company of his disciples, and a great multitude of people out of all Judaea and Jerusalem, and from the sea coast of Tyre and Sidon, which came to hear him, and to be healed of their diseases;

Neither Mark nor John mention any such sermon at all.

From Leviticus Chapter 25
37 Thou shalt not give him thy money upon usury, nor lend him thy victuals for increase.

From Psalms Chapter 15
1 Lord, who shall abide in thy tabernacle? who shall dwell in thy holy hill?
5 He that putteth not out his money to usury, nor taketh reward against the innocent. He that doeth these things shall never be moved.

From Matthew Chapter 25
27 Thou oughtest therefore to have put my money to the exchangers, and then at my coming I should have received mine own with usury.

From Luke Chapter 19
23 Wherefore then gavest not thou my money into the bank, that at my coming I might have required mine own with usury?

Intriguingly, it would appear that the Old Testament forbids usury, while the New Testament permits it.

Yet, paradoxically, in the Middle Ages New Testament Christians were forbidden to lend money at interest, while Old Testament Jews became moneylenders!

From Leviticus Chapter 20
17 And if a man shall take his sister, his father’s daughter, or his mother’s daughter, and see her nakedness, and she see his nakedness; it is a wicked thing; and they shall be cut off in the sight of their people: he hath uncovered his sister’s nakedness; he shall bear his iniquity.

From Genesis Chapter 20
11 And Abraham said, Because I thought, Surely the fear of God is not in this place; and they will slay me for my wife’s sake.
12 And yet indeed she is my sister; she is the daughter of my father, but not the daughter of my mother; and she became my wife.

Children shall suffer for the sins of their fathers…

From Numbers Chapter 14
18 The Lord is longsuffering, and of great mercy, forgiving iniquity and transgression, and by no means clearing the guilty, visiting the iniquity of the fathers upon the children unto the third and fourth generation.

From Deuteronomy Chapter 5
9 Thou shalt not bow down thyself unto them [other gods], nor serve them: for I the Lord thy God am a jealous God, visiting the iniquity of the fathers upon the children unto the third and fourth generation of them that hate me,

From Isaiah Chapter 14
21 Prepare slaughter for his children for the iniquity of their fathers; that they do not rise, nor possess the land, nor fill the face of the world with cities.

Jesus was the “seed of David” [via Joseph]…

From Romans Chapter 1
3 Concerning his Son, Jesus Christ our Lord, which was made of the seed of David according to the flesh;


From Mark Chapter 6
3 Is not this the carpenter, the son of Mary, the brother of James, and Joses, and of Juda, and Simon? and are not his sisters here with us?

From Matthew Chapter 1
18 Now the birth of Jesus was on this wise: When as his mother Mary was espoused to Joseph, before they came together, she was found with child of the Holy Ghost.
19 Then Joseph her husband, being just a man, and not willing to make her a publick example, was minded to put her away privily.
20 But while he thought on these things, behold, the angel of the Lord appeared unto him in a dream, saying, Joseph, thou son of David, fear not to take unto thee Mary thy wife: for that which is conceived in her of the Holy Ghost.

From Luke Chapter 1
26 …the angel Gabriel was sent from God unto a city of Galilee, named Nazareth,
27 To a virgin espoused to a man whose name was Joseph of the house of David; and the virgin’s name was Mary.
30 And the angel said unto her, Fear not, Mary: for thou hast found favour with God.
31 And, behold, thou shalt conceive in thy womb, and bring forth a son, and shalt call his name Jesus.
34 Then said Mary unto the angel, How shall this be, seeing I know not a man?
35 And the angel answered and said unto her, The Holy Ghost shall come upon thee, and the power of the Highest shall overshadow thee: therefore also that holy thing which shall be born of thee shall be called the Son of God.

Excerpted from When God Speaks for Himself by Mark Tier and George Forrai. Copyright © Mark Tier and Pronto Express, 2010. All rights reserved.

Mark Tier, an Australian based in Hong Kong, started writing when he was 14 – and hasn’t stopped since. His first work, Understanding Inflation, was a bestseller in his native Australia in 1974. That was followed by The Nature of Market Cycles, How To Get A Second Passport, and The Winning Investment Habits of Warren Buffett & George Soros, which has been published in 3 English (New York, London, & Hong Kong) and 11 other-language editions. Once labelled “the Eclectic Investor” for his wide range of interests, he co-edited two science fiction anthologies which won a Prometheus Award in 2005, an analysis of Christianity, When God Speaks for Himself, and a political thriller, Trust Your Enemies. His website is marktier.com.

"When God Speaks for Himself: The Words of God You'll NEVER Hear in Church or Sunday School" by Mark Tier and George Forrai. https://t.co/0qWm1eRIVY pic.twitter.com/ISteg9GCoG

MARK TIER: WHEN GOD SPEAKS FOR HIMSELF

The Science of the Bible (Series)

The Science of the Bible: The Creation

God created light on the first day – but he doesn’t get around to creating any source of light until the fourth day. And there’s no known scientific basis for the existence of light without a source.
CHRISTENDOM WAS ONE ENORMOUS SUNDAY SCHOOL

The Science of the Bible: The Flood

The Science of the Bible: The Ark

The Science of the Bible: The Story of Jonah

MORE EXCERPTS FROM WHEN GOD SPEAKS FOR HIMSELF