This post by Frank Minero originally appeared at Addicting Info. An eye-opening survey conducted in the UK reveals a truth many in the United States will find shocking. When asked if atheists are more or less moral than religious people, our allies across the pond favor atheists.

The poll, conducted by Survation for the HuffingtonPost UK’s series Beyond Belief doesn’t address why Britons have come to this conclusion, however faith in God and religion is falling in America as well. Jerome Baggett, a professor at the Graduate Theological Union in Berkeley, California told The San Francisco Business Times why he thinks people are retreating from religion in the United States,

“Religious institutions themselves have lost their legitimacy in the eyes of many Americans due to sexual and financial scandals, or political overreaching ‘by the so-called Christian right.’”

Linda Woodhead, professor of the sociology of religion at Lancaster University, told The Huffington Post UK she found the results of the poll “striking,”

“This confirms something I’ve found in my own surveys and which leads me to conclude that religion has become a ‘toxic brand’ in the UK. What we are seeing is not a complete rejection of faith, belief in the divine, or spirituality, though there is some of that, but of institutional religion in the historic forms which are familiar to people.”

Woodhead explains the reason Britons are distancing themselves from religion are “numerous” and include: sex scandals involving Catholic priests and rabbis, as well as Islamist terror attacks and conflict in the Middle East,

“I’d add religious leaderships’ drift away from the liberal values, equality, tolerance, diversity, [which is] embraced by many of their own followers and often championed by non-religious and atheist people more forcefully”.

Andrew Copson, chief executive of the British Humanist Association had this to say,

“This survey just confirms what we know is the common sense of people in Britain today – that whether you are religious or not has very little to do with your morality. Most people understand that morality and good personal and social values are not tied to religious belief systems, but are the result of our common heritage and experience as human beings: social animals that care for each other and are kind to others because we understand that they are human too. Not only that, people understand that religious beliefs themselves can be harmful to morality: encouraging intolerance, inflexibility and the doing of harm in the name of a greater good. We only need to look around us to perceive that fact.”

In an unrelated video, noted American author, philosopher, and neuroscientist Sam Harris offers a detailed explanation of why he feels morality based on the Christian God is lacking. 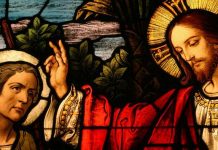