He was right, of course, and he should have included Jewish endeavor and Muslim endeavor in his observation. Western religions have spent millenia inflicting shame, guilt, repression and punishment upon human sexuality — especially upon women’s sexuality.

Asian faiths aren’t so punitive. They generally accept lovemaking as a natural part of life. Some Hindu temples are covered with statues of copulating gods and goddesses. Millions of Shiva worshipers pray over models of his erect penis. Tantric sects practice ritual intercourse.

But the West presents an opposite, ugly story: a long chronicle of religious hostility to lovers — for no rational reason.

The Old Testament raged against “whoredom” and decreed brutal penalties for unapproved sex. It commanded that non-virgin brides be stoned to death (Deut. 22:21).

In the first century C.E., Paul urged celibacy for Christians. The earliest known papal decree, issued by Pope Siricius in 386, attempted (without much success) to forbid church elders to make love with their wives. Scholar Reay Tannahill says early Christian leaders made sex and “sin” synonymous.

“It was Augustine who epitomized a general feeling among the church fathers that the act of intercourse was fundamentally disgusting,” she wrote. “Arnobius called it filthy and degrading, Methodius unseemly, Jerome unclean, Tertullian shameful, Ambrose a defilement.” (Sex in History, by Reay Tannahill, Stein & Day, 1980, p. 141)

Christian father Origen of Alexandria reportedly castrated himself in a traumatic display of faith.

When priests oversaw the historic witch hunts — in which thousands of women were tortured and burned — church writings reeked of revulsion to female sexuality. A medieval cardinal, Hughes de St. Cher, wrote:

When Puritans ruled England in the 1600s, death was decreed for adultery.

In late 19th century America, Anthony Comstock and his “Committee for the Suppression of Vice” pursued sex like a hunted animal. About 2,500 people were convicted on morality charges, and Congress passed the puritanical Comstock Laws. Margaret Sanger was jailed eight times for advocating birth control. Comstock even led a police raid against an art gallery which dared to display the naively innocent “September Morn” painting.

Until recently, thanks to church pressure, nearly every U.S. state had Old Testament-style laws against “fornication” and “sodomy” and the like. It wasn’t until 1972 that the U.S. Supreme Court finally ruled that all American couples have a right to birth control. The clergy’s opposition to contraception is based not so much on a desire for limitless breeding as a desire to prevent people from enjoying the sexual freedom brought by birth control.

Today, the church’s ability to imprison nonconformists has receded. However, every censorship effort, every attempt at sexual repression, still comes from religion.

North Carolina’s 1.2 million Southern Baptists recently voted to shut off their television sets for a day to protest “moral depravity” in shows such as “NYPD Blue,” which contains partial nudity and sex.

In 1993, Pope John Paul II declared unmarried sex and birth-control “intrinsically evil.” In my city (Charleston, West Virginia), two brave nuns, Patricia Hussey and Barbara Ferraro, battled Catholicism’s sexual taboos until they finally were forced out of their order. They recounted their struggle in a 1990 book, No Turning Back. It says: “The church really hates the idea of people having sex for fun…. There is something prurient and dishonest about the church’s loathing for the body.”

Sometimes the ministers who rail loudest against “filth” and “pornography” are cloaking their secret sins. Television evangelists Jimmy Swaggart and Jim Bakker both fell to private sex scandals. Georgia revivalist Mario Leyva went to prison in 1990 for sodomizing more than 100 church boys, and two assistant pastors likewise were jailed. Numerous such cases appear in the news.

As American clergy endlessly strive to censor sex from public media, an odd contradiction has arisen: Ministers raise little objection to a movie containing 50 murders — but a glimpse of a woman’s nipple brings their wrath. A popular song commented: “Bullets fly like popcorn on the screen, recommended wholesome, nice and clean. Making love’s the thing that can’t be seen. Why?”

(Using legal language, Congress and state legislatures periodically ponder laws to imprison purveyors of “ultimate sexual acts.” In my newspaper, I once asked readers to suggest what might be an ultimate sexual act. A couple in a rubber raft going over Niagara Falls? Two elephants in a china shop?)

Meanwhile, the sexual hangups of Christianity today are trivial compared to those in the Muslim world, where suppression of women continues at Old Testament levels. Some examples:

— In Muslim Somalia, an estimated 98 percent of girls are genitally mutilated to inhibit their sexual pleasure throughout their lives and keep them “pure” for husbands. But it doesn’t always work. In 1993, a United Nations team found five women being stoned to death for adultery. They had been condemned by mosque leaders, and the execution was carried out after evening prayers. Cheering villagers videotaped the killing. U.N. observers who tried to save the women were driven off by threats of death. U.N. agent Cecelia Kamau said bitterly: “Fundamentalism is really catching on.”

— In Muslim Algeria, zealots shoot high school girls in the face for not wearing veils, and cut the throats of professors who teach boys and girls in the same classrooms.

— In Muslim Iran, morality patrols flog women who allow a lock of hair to show beneath their shrouds, and clerics laboriously black out women’s faces in imported magazines.

— In Muslim Saudi Arabia, a teen-age princess and her lover were executed in public in 1977 for the crime of making love.

— In Muslim Afghanistan, a major mujahideen (holy warrior) leader — one of those praised by President Reagan as “freedom fighters” — got his start by throwing acid in the faces of unveiled college girls. Now that even-more-puritanical Taliban religious students have seized Afghanistan, they’ve decreed that all windows must be painted black, lest someone look at a woman through one, and they stone women to death for being in the company of a man who isn’t a relative.

It would probably take an army of psychiatrists and historians to pinpoint all the reasons why Western religion developed such antagonism toward human sexuality. More important is the question: Is this attitude justified? Are there ethical, rational reasons to support the religious condemnations of normal human desires? 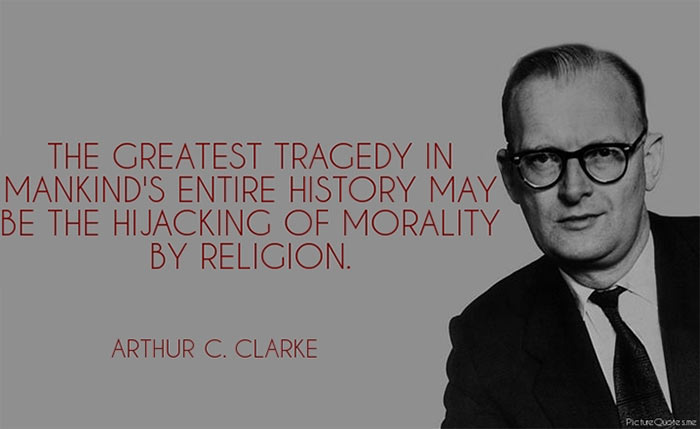 Perhaps the most detailed and insightful answer came from none other than humanist Bertrand Russell, who said a “morbid and unnatural” attitude toward sex is “the worst feature of the Christian religion.” And much of what he said applies with equal force to the other Western religions. He asserted that church aversion to sex is not only unfounded but harmful. Against the prevailing anti-sex views of religion, he argued that sexual pleasure is a positive good, and that religious objections are based not on reason but on dogma. But perhaps his most important argument was that religious anti-sexuality attitudes inflict untold human misery, especially on women. He observed:

“Monks have always regarded Woman primarily as the temptress. They have thought of her mainly as the inspirer of impure lusts.” So the church has done “what it could to secure that the only form of sex which it permitted should involve very little pleasure and great deal of pain. The opposition to birth control has, in fact, the same motive.” (Has Religion Made Useful Contributions to Civilization? — essay)

“…An inexperienced girl is married to a syphilitic man; in that case the Catholic Church says, ‘This is an indissoluble sacrament. You must endure celibacy or stay together. And if you stay together, you must not use birth control to prevent the birth of syphilitic children.’ Nobody whose natural sympathies have not been warped by dogma, or whose moral nature was not abolutely dead to all sense of suffering, could maintain that it is right and proper that that state of things should continue.

“…The church, by its insistence upon what it chooses to call morality, inflicts upon all sorts of people undeserved and unnecessary suffering… because it has chosen to label as morality a certain narrow set of rules of conduct which have nothing to do with human happiness; and when you say that this or that ought to be done because it would make for human happiness, they think that has nothing to do with the matter at all. ‘What has human happiness to do with morals? The object of morals is not to make people happy.'” (Why I Am Not a Christian — essay)

In other words, people are less important to the church than the harsh rules it adopted centuries ago. Scholar Gerald Larue, author of Sex and the Bible (Prometheus Books, 1983), says: “When biblical sexual taboos serve to produce guilt and deny normal and natural sexual behavior, their influence is toxic.” (USA Today magazine, September 1985)

Ironically, century after century of holy hostility to sex hasn’t dampened humanity’s zest for it. A 1992 World Health Organization report estimated that more than 100 million couples around the globe make love in a single day. And people relish sexual entertainment as well. A recent issue of U.S. News & World Report was devoted to the astounding rise of the sex business in America. It said:

If Americans rent 665 million X-rated videos each year, as the report said, while conservative churches still say sex is “filth” or “intrinsically evil,” someone is out of step with reality. And it isn’t the billions of people who know, deep in their psyches, that lovemaking is intrinsically good.

Most Westerners have come to regard sex as wholesome and wonderful. Sanctimonious strictures suit fewer and fewer people. Episcopal priest Raymond Lawrence wrote in a national United Methodist journal:

“The churches are in danger of evolving into havens for the sexually suppressed or, worse, communities of profound hypocrisy.” (Quarterly Review, summer 1985)

True — but the record of the centuries shows clearly that Western religion has always been a haven for the sexually suppressed.

Richard Dawkins explains how the gay gene was preserved