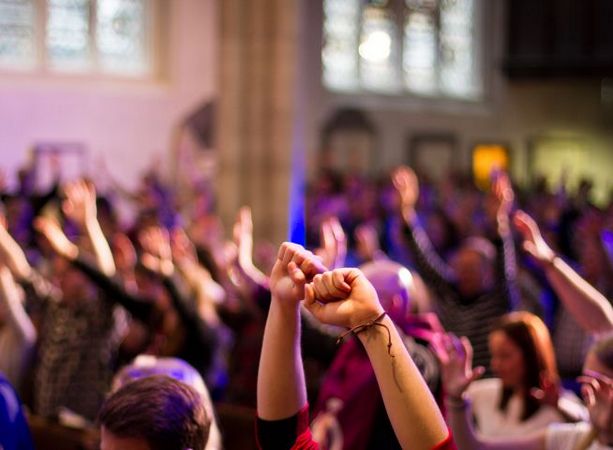 The Book of Acts says the risen Jesus told his apostles “ye shall be baptized with the Holy Ghost not many days hence.” And when they gathered on Pentecost, “suddenly there came a sound from heaven as of a rushing mighty wind… and there appeared unto them cloven tongues like as of fire… and they were all filled with the Holy Ghost, and began to speak with other tongues.”

Just over a century ago, a little-educated evangelist named William Seymour, a son of ex-slaves, preached that modern Americans could “get the tongues” as the apostles did. In a Los Angeles slum, he led followers in ardent prayer, hoping for the “rushing mighty wind” from heaven.

Finally, on April 9, 1906, after five weeks of beseechment, a follower began spouting uncontrollable sounds. Next meeting, six more believers experienced glossalalia. Then the minister himself followed — and word of the “miracle” spread like wildfire. Hundreds, thousands, of believers flocked to the ramshackle church, where many “got the tongues.” Excitement spawned missionaries who carried the mysterious new phenomenon to other cities — and finally to other countries.

The Los Angeles Times heard the buzz and sent a reporter, who wrote:

“Meetings are held in a tumble-down shack on Azusa Street , and the devotees of the weird doctrine practice the most fanatical rites, preach the wildest theories and work themselves into a state of mad excitement in their peculiar zeal. African Americans and sprinkling of whites compose the congregation, and night is made hideous in the neighborhood by the howlings of the worshipers, who spend hours swaying forth and back in a nerve-wracking attitude of prayer and supplication. They claim to have the ‘gift of tongues’ and be able to understand the babble.”

“They cry and make howling noises all day and into the night. They run, jump, shake all over, shout to the top of their voice, spin around in circles, fall out on the sawdust-blanketed floor jerking, kicking and rolling all over it. Some of them pass out and do not move for hours as though they were dead. These people appear to be mad, mentally deranged or under a spell.”

For decades, Pentecostals remained a remote fringe, derided as “holy rollers.” But gradually, they inched into the mainstream. Republican politicians like Sarah Palin and John Ashcroft were Assemblies of God believers.

As late as 1980, Pentecostals were smallish, comprising a tiny fringe of Christianity. Then a remarkable upsurge occurred. The Atlas of Pentecostalism, maintained by the Pulitzer Center, says:

“An estimated 35,000 people join the Pentecostal church each day. Of the world’s 2 billion Christians, a quarter are now Pentecostal — up from 6 percent in 1980.”

As most of Christianity shrinks, Pentecostals are the fastest-growing group. A Wheaton Theology report says:

Will much of Christianity be transformed into jerking, howling, swooning congregations who utter incoherent sounds? If so, that’s one more reason for thinking people to renounce irrational supernaturalism.

The Roots of the Pentecostal Movement