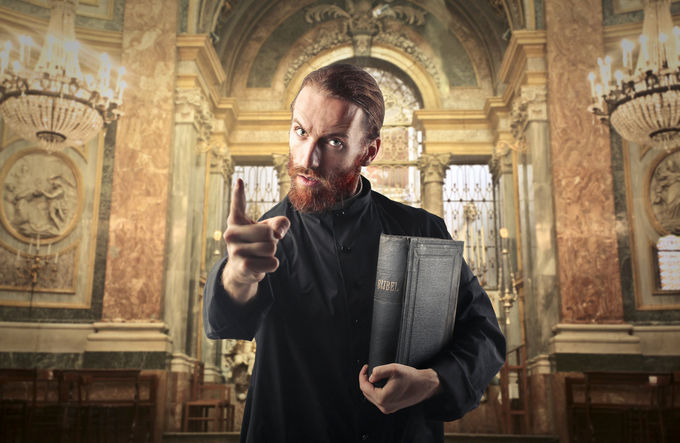 In recent years, as atheists have become more comfortable stepping out of the closet and living as out, open nonbelievers, we’ve seen an influx in believers lashing out against atheists, publicly stating they’re not welcome, or worse yet, should leave the country.

In just the latest example of this, the Boy Scouts of America, already known by the secular community to be discriminatory against atheists, reinforced their stance at their 2018 annual meeting. During the event, the BSA National Executive Board adopted a resolution entitled, “Reaffirming Duty to God.” In part, it says:

The recognition of God as the ruling and leading power in the universe and the grateful acknowledgement of His favors and blessings are necessary to the best type of citizenship and are wholesome precepts in the education of the growing members. No matter what the religious faith of the members may be, this fundamental of good citizenship should be kept before them.

So basically, BSA doesn’t care which “God” you believe in, as long as you’re not one of those nasty nonbelievers. Those filthy atheists couldn’t possibly be good citizens. But was this resolution necessary? Did it change anything in the Scout Oath or Scout Laws? No. It didn’t do anything but restate what they’ve already said for decades. This was purely an effort to publicly reassure religious groups who have aligned with BSA through the years that BSA is still full of God-fearing people who deserve financial support. Translated, this says, “Hey baby, I know you’re mad about us letting in the gays, transgender kids, and now the girls, but we still love Jesus and want to keep out the atheists, so are we cool?”

While the Boy Scouts have recently loosened their membership rules to include LGBTQ children and girls, it seems their exclusion of atheists will stand as long as their current leadership is in place. In a letter signed last October by BSA’s National President, National Commissioner, and Chief Scout Executive, they stated, “We believe this nation needs and deserves more youth focused on the foundations that still serve as bedrock of our movement — duty to God and country with a desire to help other people at all times.”

Supporters of the Boy Scouts might say, “So what? They can admit whoever they want.” While that’s true, what we need to be aware of is that BSA receives federal funding and support, and according to federal law, should not be discriminating based on religion. But I digress. The issue I’m focused on here is the openly accepted bigotry against atheists — the idea that atheists aren’t welcome and that without religious belief, a person cannot be moral, or a good citizen in BSA’s case.

We see this type of open bigotry applauded every day and celebrated by the religious. We’ve all seen the poll numbers suggesting that atheists are the most mistrusted, or even hated, demographic in the US. Most of this sentiment comes from a basic misunderstanding of who atheists are, what we actually believe, and what many of us stand for. Hell, I even wrote a book about it (shameless plug).

But what if this type of bigotry was directed toward any other group?

What if preachers were standing in the pulpit railing against Muslims, Jews, or Buddhists, telling them to leave the country?

What if radio hosts went on the air to say that African Americans weren’t “real Americans” because they weren’t included in the founding of America, and as such should be excluded from military service?

What if Fox News ran a piece on their website that began with, “There’s no polite way to say it. Women today are the most arrogant, ignorant and dangerous people on earth.” You’d better believe the columnist would have lost his job. But instead, the real article had “atheists” instead of women in the opening line. That’s apparently acceptable and encouraged.

What if cable news pundits said they were “tired of” equal rights advocates or activists, and instead of taking them seriously, said, “if they don’t like it, they don’t have to live here?” That would be an outrageous and un-American statement if it were about any other group, but since it was about atheists, a colleague instead says, “good point.”

At what point will the masses refer to anti-atheist discrimination as bigotry? What will it take? Hate crimes? We’ve had those too.

How do we correct it? Through civil and criminal legal action, for sure. But aside from that method, I think we can all take part in enacting change. Living in a society where so many people feel it’s ok to openly discriminate against nonbelievers, we need to show them why it’s not ok. While it’s true that the blame for bigotry should be placed solely on the bigot, there are things we can do to expedite the change that needs to happen. We need to do a better job educating instead of debating. We need to show the religious that we’re their friends, neighbors, coworkers, family members, and public servants — not the nameless, faceless evil-doing strawman atheists their pastors warned them about. We need to have civil conversations incorporating ideas that could spark change in a person’s mind. I’ve had plenty of these conversations with friends, acquaintances, and family members alike.

“This is why discrimination is wrong, regardless of the target.”

“How is this different from discriminating against any other group? What makes it acceptable?”

“Does your god say to love your neighbor or to lash out against him based on his belief system?”

The bottom line, though, is that we need to call it what it is and stop glossing over this type of discrimination. Bigotry is bigotry, regardless of your feelings about the target or how many people agree with you. And standing by in silence, allowing it to continue without calling it out makes others complicit and just as despicable. Putting the proper name to it and raising awareness, though, will help bring about change.

Kevin Davis is the Founder and Managing Director of SecularVoices.org, and the author of Understanding an Atheist: A Practical Guide to Relating to Nonbelievers, a book aimed at improving relationships between the religious and their atheist loved ones. He is most recently known for being co-founder and Executive Director for Young Skeptics, an elementary-level after-school program for kids. Young Skeptics was launched in January 2015 as an alternative to the controversial Good News Club, an organization operating in public schools that evangelizes children and spreads fundamentalist Christian doctrine focused on shaming children for their sins. His writing has been featured or mentioned on CNN, Huffington Post, Salon, RichardDawkins.net, Patheos, and many others.

"Understanding an Atheist: A Practical Guide to Relating to Nonbelievers" by Kevin Davis. https://t.co/RrlvGciwqc pic.twitter.com/TBkiGHr13B