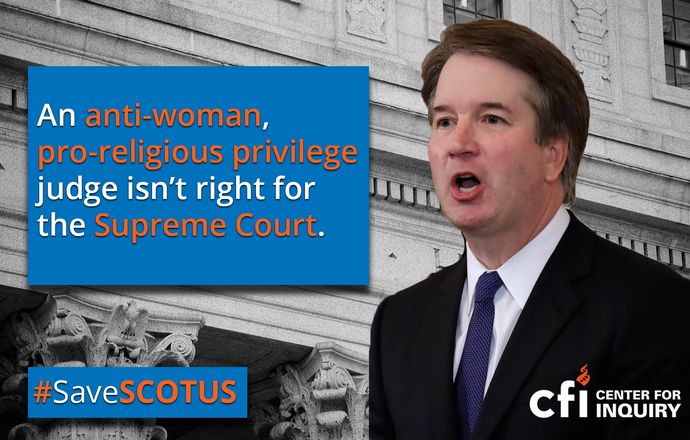 Since there are over 40 million abortions yearly worldwide, perhaps half done unsafely, the arrival of safe chemical means which are now widely used here and overseas will make enforcement of any abortion restrictions harder. The non-surgical chemical choice genie is out of the bottle. You can see my 1990 film “Whose Choice?” on this site about the bad old days which ran on TBS on September 21, 1991 in prime time. It now can be viewed on churchandstate.org.uk.

Having been deeply involved in women’s reproductive rights since the 1960’s, my June 8th op ed tells how chemical abortions will give women huge access. I do not see Roe being brought down by the Supreme Court after this new nominee is confirmed. Stare Decisis will prevail in my view, but more inhibitions will be thrown in the way of safe early abortions which will continue to hurt too many poor young women, which has always been the case.

Justice Kennedy’s Supreme Court replacement will affect the rights of Americans for decades to come. On July 9, President Donald Trump nominated Brett Kavanaugh, a judge on the U.S. Court of Appeals for the District of Columbia with a record of political partisanship and known for favoring privileged religious groups over all other Americans. If Judge Kavanaugh’s record is any indication, he will further enable privileged groups who seek to impose their religious views and practices on targeted groups including secularists, atheists, women, LGBTQ individuals, and religious minorities. Judge Kavanaugh is relatively young at 53, and he will likely be on the court for many decades to come. His term would be disastrous for separation of church and state.

Please tell your senators to oppose his nomination.

Here are some of Judge Kavanaugh’s most troubling decisions in favor of religious privilege:

We are facing a dire situation for separation of church and state, but the solution is straightforward: The Senate has a responsibility to reject any candidate for the Supreme Court who does not embrace secular government, uphold religious neutrality, and protect religiously targeted groups. Will you tell your Senators that Judge Kavanaugh is wrong for the Supreme Court?

All you need to do is call (202) 224-3121 with your zip code to be connected to your senators. If you are unable to call, please use our custom webform below to send your senators a written message.

Thank you for supporting the separation of church and state!

Back in 1991, the NGO Don Collins founded in 1976, International Services Assistance Fund (ISAF), co-produced a TV quality 22-minute film called “Whose Choice?” which Ted Turner arranged to broadcast on September 21, 1992 in prime time on his then independent Turner Broadcast System (TBS). Other outlets such as PBS and several of its affiliates Collins and his colleagues contacted then refused to run it because of its forthright treatment of the abortion issue, arguing for all women’s right to choose not to have a baby. ISAF has made a new edition of that DVD. The purpose for reissuing this 3rd version of “Whose Choice?” was simply to show the historical urgency that attended those times, still blocked and attacked over 40 years after the Roe v Wade decision in 1973. This video is available for public viewing for the first time.

What to expect from Brett Kavanaugh’s confirmation battle