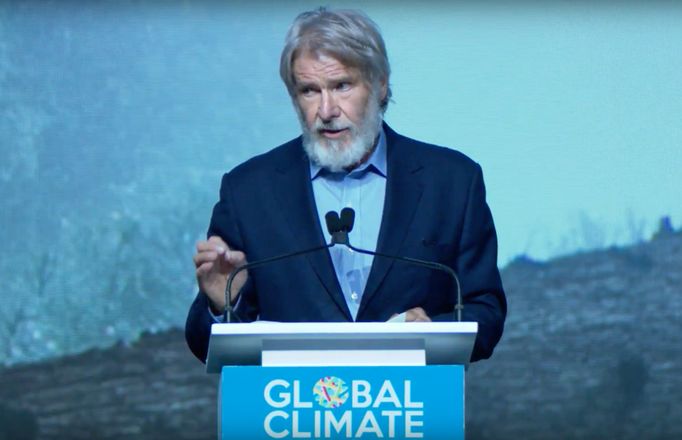 The three-day Global Climate Action Summit is taking place in San Francisco right now. There have been protests in the streets, letting the over 4,000 elected officials attending the summit know how people feel about our country’s market-based response to the changing climate and the poisoning of our lands.

Protesters crowded the intersection of Howard and Third Streets outside the Moscone Center, forcing summit delegates to climb over barriers or go around the protest. As the delegates walked past, a protester yelled out, “There’s more than just market-based solutions, folks! The market sucks, suit!” Another encouraged delegates to participate in the protest: “Join us! Join the community, not corporations!”

Many in the group were indigenous people who traveled from around the country to San Francisco for the summit. They highlighted environmental issues beyond carbon emissions alone. Many said they want to protect the lands they live on from being destroyed by pollution.

Actor Harrison Ford spoke at the summit Thursday, highlighting the need to protect our natural habitats, and not simply buy and sell our carbon emissions.

I beg of you, don’t forget nature. Because today, the destruction of nature accounts for more global emissions than all the cars and trucks in the world. We can put solar panels on every house, we can turn every car into an electric vehicle, but as long as Sumatra burns, we will have failed. So long as the Amazon’s great forests are slashed and burned, so long as the protected lands of tribal people, indigenous people are allowed to be encroached upon, so long as wetlands and bog peats are destroyed, our climate goals will remain out of reach, and we will be shit out of time.

Ford did not forget about environmental justice, with an impassioned call for Indigenous autonomy and rights.

Empower indigenous communities to use their knowledge, their history, their imaginations, our science to save their heritage and their lands. Respect and ensure their rights.

Ford saved some of his anger and rage to highlight the importance of science, and the worthlessness of those who would denigrate it.

This is the core truth. If we are to survive on this planet, the only home any of us will ever know, for our climate for our security and for our future—we need Nature. Now, more than ever.

“Nature doesn’t need people,” Ford concluded. “People need nature.” It seems such a simple and easy message to follow. You can watch a video of Thursday’s events below. Ford’s speech begins at 4:45:25.