This article was originally published in The Overpopulation Project on 24 August 2018.

The climate threat is now on everyone’s lips. However, it is rarely mentioned together with population growth, despite the fact that they interrelated. That is why actions to dampen population increase are missing, though they would lead to powerful reductions in greenhouse gas emissions – according to a Science article by researchers from the USA.

Researchers John Bongaarts at the Population Council in New York and Brian O’Neill at the National Center for Atmospheric Research in Boulder, Colorado, state that population increase was well discussed between the 1950s and the 1980s, but since then, has more or less disappeared from the agenda. This is noticeable on several levels. The Intergovernmental Panel on Climate Change (IPCC) mentions that population growth is a factor behind climate warming, but it is silent about how to tackle the problem. In addition, in the Paris Agreement on climate change, the population problem is missing altogether. Unfortunately, many are silent on population issues. In the UN’s  development goals, the problem is similarly not included, says Frank Götmark, Professor of Ecology at the University of Gothenburg.

The reason for the silence, according to the new study, is political to a high degree. For many years the importance of family planning was stressed, both in order to empower women in the world and as a way to reduce birth rates. But at the global population conference in Cairo in 1994, this was toned down – largely due to resistance from conservative and religious groups from a number of mainly Muslim countries. At the same time, it became taboo in the West. People did not want to offend the poor countries, says Frank Götmark.

Nevertheless, it is striking how climate and population issues are connected. The curves of population growth and carbon dioxide levels in the atmosphere since 1880 almost precisely follow each other. Population growth automatically increases energy consumption, which in turn means increased greenhouse gas emissions, says Götmark. However, this relationship is often neglected. 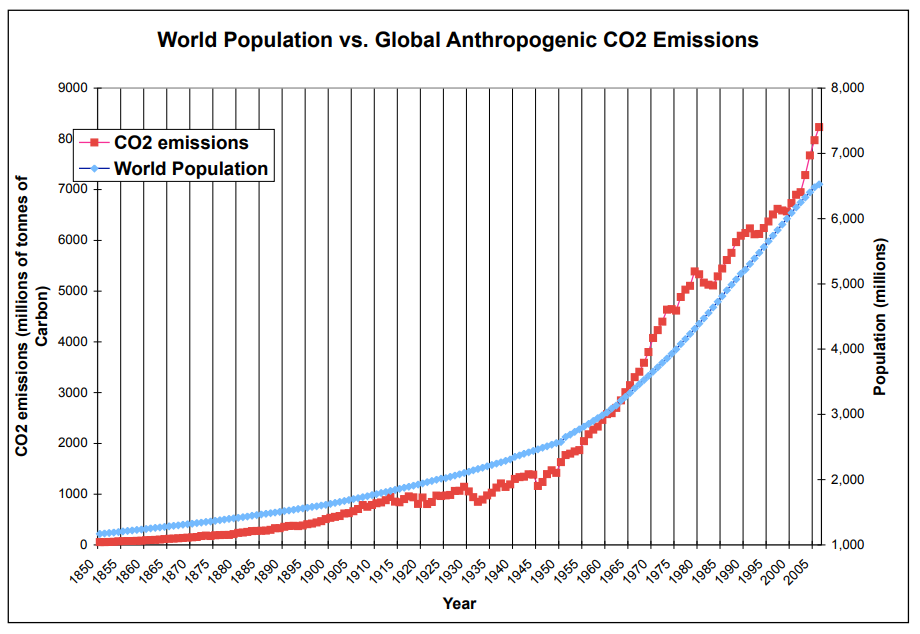 Many people think, for example, that population growth does not matter in poor countries because their emissions per capita are low. Nevertheless, it is a fundamental misconception, write Bongaarts and O’Neill. A dampened population growth in the world would reduce greenhouse gas emissions in the long term by 40 percent or more, according to a study in The Lancet from 2012. Another study from 2010 in the Proceedings of the National Academy of Sciences shows that emissions could decrease by 29 percent already by 2050 by slowing population growth, which would be a crucial contribution to reducing the risks of a steep temperature rise by 2100.

Bongaarts and O’Neill point out that UN forecasts suggest that the global population will increase from today’s 7.6 billion to 11.2 billion people by the year 2100 – and in the worst case, we could reach 13.3 billion. To believe this unprecedented increase will not affect the climate is to completely ignore reality, according to the researchers.

Another misconception is that family planning in poor countries is not providing any results. On the contrary, they write, different actions have proved to be surprisingly effective in some countries. One good example is Bangladesh, where access to cheap contraceptives and health care for women has led to a sharp decline in birth rates. A comparison with Pakistan is striking. In 1980, they both had almost exactly the same population: about 80 million. In 2100, the estimated population of Pakistan will be more than twice as big as Bangladesh’s: 360 versus 170 million. The reason is that Pakistan has lacked family planning programs.

A third misconception is that family planning is an overly controversial action in many countries. The researchers argue that there is no reason to let that kind of controversy stand in the way of sensible actions where everyone wins in the long term – not least the poor women of the world. Frank Götmark agree with them. The problem has to be highlighted. It is absurd that the issue has fallen off the agenda, he says.

10,000 years ago, toward the end of the ice age, when people first began to farm the land, there were probably up to two million people on earth. By the time of Christ’s birth 2,000 years ago, the number had risen to 200-300 million. The population grew relatively slowly over the following centuries to around one billion people around 1800. That rate increased significantly after the industrial revolution. By 1950, we were 2.5 billion people on earth. What happened after that, can not be described as anything else than a population explosion. Since 1950, over the course of 65 years, the total number of people on the planet has tripled to 7.6 billion today.

"The Life and Death of NSSM 200: How the Destruction of Political Will Doomed a U.S. Population Policy" by Stephen D. Mumford, DrPH.https://t.co/ervrLTcWGQ pic.twitter.com/HqYNRMa10D