When MIT research scientist Christopher Carr visited a green sand beach in Hawaii at the age of 9, he probably didn’t think that he’d use the little olivine crystals beneath his feet to one day search for extraterrestrial life. Carr, now the science principal investigator for the Search for Extraterrestrial Genomes (SETG) instrument being developed jointly by the Department of Earth, Atmospheric and Planetary Sciences (EAPS) at MIT and Massachusetts General Hospital, works to wed the worlds of biology, geology, and planetary science to help understand how life evolved in the universe.

“Our history revealed by science is a truly incredible story,” Carr says. “You and I are a part of an unbroken chain of 4 billion years of evolution. I want to know more about that story.”

SETG was initially proposed by professor of genetics at Harvard Medical School Gary Ruvkun, and since 2005 has been led by Maria Zuber, the E. A. Griswold Professor of Geophysics in EAPS and vice president for research at MIT.

As the science principle investigator of SETG, Carr, along with a large team of scientists and engineers, has helped develop instrumentation that could withstand radiation and detect DNA, a type of nucleic acid that carries genetic information in most living organisms, in spaceflight environments. Now, Carr and his colleagues are working to fine-tune the instrumentation to work on the red planet. To do that, the team needed to simulate the kinds of soils thought to preserve evidence of life on Mars, and for that, they needed a geologist.

Angel Mojarro, a graduate student in EAPS, was up for the task. Mojarro spent months synthesizing Martian soils that represented different regions on Mars, as established by Martian rover data.

“Turns out you can buy most of the rocks and minerals found on Mars online,” Mojarro says. But not all.

One of the hard-to-find components of the soils was olivine from the beach Carr had visited as a child: “I called up my folks and said, ‘Hey, can you find the olivine sand in the basement and send me some of that?’”

After creating a collection of different Mars analog soils, Mojarro wanted to find out whether SETG could extract and detect small amounts of DNA embedded in those soils as it would do on a future Mars mission. While many technologies already exist on Earth to detect and sequence DNA, scaling down the instrumentation to fit on a rover, survive transport from Earth, and conduct high fidelity sequencing in a harsh Martian environment is a unique challenge. “That’s a whole bunch of steps, no matter what the sequencing technology is right now,” Carr says.

The SETG instrumentation has evolved and improved since its development began in 2005, and, currently, the team is working to integrate a new method, called nanopore sequencing, into their work. “In nanopore sequencing, DNA strands travel through nano-sized holes, and the sequence of bases are detected via changes in an ionic current,” Mojarro says.

By themselves, Mojarro’s Mars analog soils didn’t contain microbes, so to test and develop nanopore sequencing of DNA in Mars analog soils, Mojarro added known quantities of spores from the bacterium Bacillus subtilis to the soils. Without human help on Mars, SETG instrumentation would need to be able to collect, purify, and enable the DNA to be sequenced, a process which usually necessitates about a microgram of DNA on Earth, Mojarro says.

The group’s results using the new sequencing and preparation method, which were reported in Astrobiology, pushed the limits of detection to the parts-per-billion scale — which means even the tiniest traces of life could be detected and sequenced by the instrument.

“This doesn’t just apply to Mars … these results have implications in other fields, too,” Mojarro says. Similar methods of DNA sequencing on Earth have been used to help manage and track Ebola outbreaks and in medical research. And further, improvements to SETG could have important implications for planetary protection, which aims to prevent and minimize Earth-originating biological contamination of space environments.

Even at the new detection limit for the SETG instrumentation, Mojarro was able to differentiate between human DNA and the Bacillus DNA. “If we detect life on other planets,” Mojarro says, “we need a technique that can tell apart hitchhiking microbes from Earth and Martian life.”

In their publication, Mojarro and Carr suggest that these developments may fill in some of the missing gaps in the story of life on Earth. “If there’s life on Mars, there’s a good chance it’s related to us,” Carr says, citing previous studies describing the planetary exchange of materials during the Late Heavy Bombardment period (4.1 to 3.8 billion years ago).

If SETG detects and sequences DNA on Mars in the future, Carr says the results could “rewrite our very notion of our own origins.”

A team of @MIT and @Harvard scientists are well underway to developing a tool to test for life on Mars https://t.co/TMHnGlHWaJ pic.twitter.com/hSr5Xm2Qp9

Reprinted with permission of MIT News.

Is there life on Mars? Gary Ruvkun is sending a DNA sequencer to find out

The New Mars Rover Is The Most Advanced Yet, Here’s Why 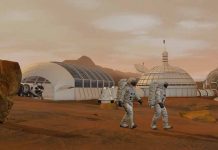