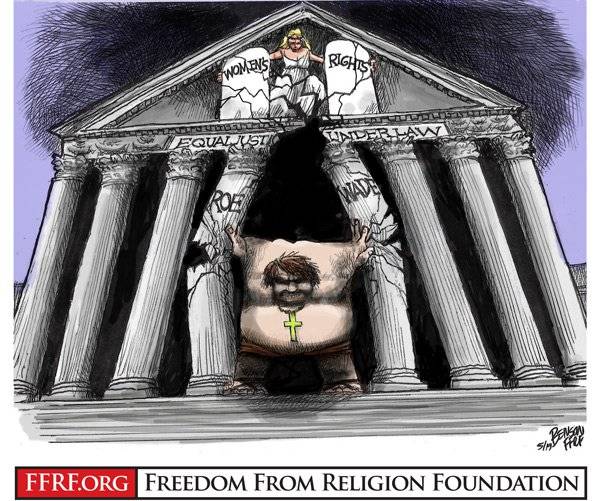 A prominent fundamentalist Christian minister and television celebrity regularly proclaims that the unborn child has a God-given right to life, that life is a gift from God, and that abortion is the sinful destruction of God’s sacred creation. These and similar assertions are thoroughly refuted by “God’s word,” the holy bible.

Defenders of women’s reproductive rights should know what the bible actually says about abortion and, by extension, related issues, including contraception, the morning-after pill, in vitro fertilization and fetal tissue research.

• A pregnant woman who is injured and aborts the fetus warrants financial compensation only (to her husband), suggesting that the fetus is property, not a person (Exodus 21:22-25).

• The gruesome priestly purity test to which a wife accused of adultery must submit will cause her to abort the fetus if she is guilty, indicating that the fetus does not possess a right to life (Numbers 5:11-31).

• Elisha’s prophecy for soon-to-be King Hazael said he would attack the Israelites, burn their cities, crush the heads of their babies and rip open their pregnant women (2 Kings 8:12).

• Isaiah prophesied doom for Babylon, including the murder of unborn children: “They will have no pity on the fruit of the womb” (Isaiah 13:18).

• For worshiping idols, God declared that not one of his people would live, not a man, woman or child (not even babies in arms), again confuting assertions about the sanctity of life (Jeremiah 44:7-8).

• God will punish the Israelites by destroying their unborn children, who will die at birth, or perish in the womb, or never even be conceived (Hosea 9:10-16).

• For rebelling against God, Samaria’s people will be killed, their babies will be dashed to death against the ground, and their pregnant women will be ripped open with a sword (Hosea 13:16).

• Jesus did not express any special concern for unborn children during the anticipated end times: “Woe to pregnant women and those who are nursing” (Matthew 24:19).

The 10 incidents and declarations surveyed above document God’s complete rejection of the anti-abortion crusaders’ claims about the sanctity of life and a divine right to life. There is clearly no biblical justification for the radical theology they espouse. This section summarizes God’s monumental history of murderous behavior as recorded in holy writ.

We know that God killed millions of unborn children and their pregnant mothers-to-be in the Noachian deluge, the conquest of Canaan, the incineration of Sodom and Gomorrah and in 20 major slaughters described in the bible. The critical feature of these horrific events is that all people were exterminated. Whenever entire communities were massacred, we can be sure that pregnant mothers-to-be and their unborn children were among the victims. Moreover, there are no stated exemptions for this specific segment of the population.

It can be concluded from this ghastly program of human annihilation that the God of the bible is the greatest mass murderer in history and that he does not care about unborn children or living children or living adults. If God really opposes abortion, why didn’t he just say so? Why didn’t he authorize one of his trusted spokesmen—Moses, Jesus or Paul—to issue a definitive statement on the subject?

It is also noteworthy that while the bible requires the death penalty for 60 specified criminal violations, abortion is not among them. When all relevant documentation is examined, it is obvious that God does not love the unborn and he certainly does not disapprove of abortion.

Anti-abortion zealots assert that human life begins at conception, and therefore the fertilized egg possesses all constitutional rights of a living person. It follows that destruction of a conceived embryo (blastocyst) is murder. This is the basis for the personhood argument which has been defeated in five statewide initiatives since 2010.

The bible declares that God breathed life into man’s body (Genesis 2:7). At least a dozen more verses indicate that breath is synonymous with life. This scriptural truth completely contradicts the personhood dogma.

More importantly, if the fertilized ovum is a person, as anti-abortion extremists claim, then God’s record as the greatest murderer of unborn children is expanded further. That is because most fertilized eggs either fail to implant in the uterine wall and pass out of the body or do implant, begin to develop and then are spontaneously aborted. Fewer than one-third of fertilized ova survive to become living humans.

Why does God murder untold millions of these “persons” every year in the U.S. alone? Why did God, who allegedly loves the unborn and hates abortion, kill so many unborn children, adolescents and adults throughout biblical history? Why do fundamentalists pursue a political agenda that is thoroughly refuted by God’s word?

Among those who deny women’s reproductive rights, numerous contradictory positions are observed. For example, some prominent politicians who want to overturn Roe v. Wade would allow exceptions for rape, incest, severe fetal abnormality and/or life of the mother. These exceptions necessarily require destroying the fetus, which is the very action they condemn. In other words, the murder of unborn children is acceptable when anti-abortion politicians approve.

Another blatant inconsistency involves physicians who want to defund Planned Parenthood because it provides aborted fetuses for medical research. Yet, some of these physicians have themselves conducted research using aborted fetuses. Furthermore, medical investigations using fetal tissue have produced lifesaving vaccines and therapeutic interventions that have benefited everyone.

The most disgusting contradiction exists between the radical activists’ preferred label “pro-life” and their horrific record of godly violence. In the 40 years since Roe v. Wade, was decided, eight abortion providers have been murdered and 17 have been maimed or seriously injured. More than 6,000 acts of violence have been perpetrated, including fire bombings, arsons, kidnappings, assaults and death threats. These agents of violence are accurately labeled “Christian terrorists.”

The activists who want to make abortion illegal invariably call themselves “Christian conservatives,” stating that they want to reduce government intrusion and eliminate burdensome regulations that limit personal liberty. They say they want to get government off our backs and out of our lives. Except, of course, when they want to use the coercive power of government to inflict their theological beliefs on everybody else, especially in matters of reproduction and sexuality.

After 40 years with at least 1 million elective abortions annually, opponents still refuse to endorse programs that are proven to reduce abortions, such as family planning that stresses contraception and comprehensive sexuality education.

Instead they promote abstinence-only, ignorance curricula. If they would focus their efforts on preventing unwanted pregnancies, they would stop many more abortions than their politically coercive and sometimes violent tactics have stopped. Ironically, the crusaders help to cause the abortions they denounce.

Dogmatists condemn what they call the “holocaust” of 56 million abortions since Roe v. Wade became the law of the land. At the same time, they spend tens of billions of dollars annually building and operating their grandiose megachurches, Christian academies and other programs to promote fundamentalist doctrines. If they really want to prevent the murder of unborn children, why don’t they just use some of their vast wealth to pay women not to have abortions?

Lastly, the most egregious contradiction occurs whenever the religionists invoke a biblical justification for their sanctimonious stance, because the Judeo-Christian God simply does not care about the lives of pregnant women and their unborn children. Abortion opponents cite a dozen verses that refer to the developing fetus but not one that condemns abortion.

The bible is an unending compilation of atrocities illustrating God’s penchant for feticide, infanticide and the wholesale slaughter of adults.

Prominent women’s rights groups like Planned Parenthood, the Religious Coalition for Reproductive Choice, NARAL Pro-choice America, Emily’s List and the National Organization for Women should confront the zealots about the complete lack of biblical support for their position. For the past decade, surveys have indicated that about two-thirds of Americans think abortion should remain legal. A 2015 poll put the figure at 80%.

Among institutions, Planned Parenthood has the highest approval (45%) and Congress has the lowest (8%). Why don’t reproductive rights advocates attack the anti-abortion terrorists with the same ferocity that the zealots exhibit in their ongoing campaign of harassment, violence and dishonesty? The truth is that the bible does not endorse the fundamentalist Christian assault on women’s reproductive health.

In fact, God is clearly pro-abortion.

Originally published by the Freedom from Religion Foundation.

The Bible is Pro-Abortion. Poor Republicans Don’t Know It

The Hypocrisy of Evangelical Christians on Abortion