A dialog between Reason and Deliberate Ignorance.

Reason (R): You claim to believe in a god who has always existed, a god who says: Before anyone came to be, “I am.” You’ve also told me this same god is all-knowing. So, it makes sense to you, based on this claim, this god has always known every human to be, from eternity. This makes each of us just as much sharers of his spiritual nature, as his spiritual sperm, eternal. I’m curious; in your own words, how does this “soul which is of necessity the nature of God” relate to the realities of life and death?

Deliberate Ignorance (DI): It’s true, we have always existed in the mind of God. This is revealed to us in the scriptures. Psalm 139: “My frame was not hidden from you when I was made in the secret place, when I was woven together in the depths of the earth. Your eyes saw my unformed body; all the days ordained for me were written in your book before one of them came to be.” And psalm 22 states, “From my mother’s womb you have been my God.”

R: So, according to your faith, (and that of other religions, I might add), this “soul” enters a body at some point in time, and your god knows the lifespan of that body. Your god knows when its departure will “come to pass.” So, its “ time is up” may come after decades, minutes, or even before birth. This “when” should make no difference to you, since you believe the soul is immortal. As you quoted yourself, all those days were written in his book “before one of them came to be.” The day may be a day when one is aborted by this god, or men. This leads me to conclude your god is indifferent. He only cares about preserving a “soul” which shares an eternal “am” with him. Whereas your family, friends, and lovers, will love you for yourself, this selfish god only cares about possessing his/your soul. Playing a game with your fears, he tells you an evil, other god, is competing with him to possess it, all the while knowing what its destination will be. The difference between us is: I ask who wrote those alleged “revealed truths?” You don’t.

DI: I do not appreciate you comparing our one true God’s revealed truths to the dogmas of other religions. Their interpretations of a soul do not include salvation from sin. Karma and reincarnation are all about fate, not faith. Jesus, by his resurrection, guarantees us eternal life with him in heaven. Some people believe all organisms have souls. Foolishness. The scriptures assure us only humans have eternal souls. Our duty is to prepare our souls for entrance into his presence. Okay, you asked me what is a soul, and I will say it is the essence of personality.

R: I’ve always had a problem with “essence,” or “substance.” This essence you speak of, the soul, is by definition, floating around, if you will, until it inhabits a body. You believe spirits have personalities. I know of no such thing as personalities existing without bodies except in fairy tales, hallucinatory visions, and mind-tricks of conjurers.

DI: Let me explain something to you. God himself entered a womb without benefit of human coitus. Jesus re-entered his dead body and revitalized it, and returned to his disciples after he died, both bodily and in apparitions. The soul of Lazarus was called back by Jesus to re-enter his already rotting body. These prove the existence of the eternal soul which lives with or without a body.

R: Here’s where things get slippery with a soul belief. Personality and consciousness can’t exist without a body, in spite of how intensely you want to believe they do. No frog soul enters into the body of a prince, and vice versa. You know this just as well as I. Awareness cannot happen without a body; senses are needed to be aware. Only with my body, I “am.” Notice, no one can relate experiences pre-conception. “You” are a combination of inherited genes, of experiences, relationships, adaptations to environments, and the use of free will to create other combinations, to manipulate them to your advantage. Religions have fear one’s body is liable to be inhabited by a spirit of god or demon.

DI: That is foolish talk. Do you not believe mind exists without a brain? God assures us; after death, we will regain our consciousness and personalities as well. Otherwise, we could not experience heaven. This life on earth would have no meaning, with all its tribulations and frustrated hopes and the loss of those we loved. It doesn’t make sense, it’s hopeless without the everlasting life to come. God’s word.

R: You insist on entertaining the concept of a “person” without bodily senses and awareness. The alternative is to understand. The essence you cling to believe in, is something you tell me once existed outside your body, and will depart with the death of your body. But there’s comfort in knowing you have nothing to fear from death, since you won’t be aware you’re dead. You don’t have to spend one second of your time and energy hoping to attain the unavailable, or with avoiding made-up torments. And in regard to hell, let me remind you Pope Francis said there is no hell. That was in March 2018, and he still hasn’t denied saying it. He said those souls who do not accept Christ will “disappear.” Will he add, the “accepting souls” might eventually also disappear? Can an “immortal” soul cease to exist?

DI: The pope is a fool and an instrument of Satan who spreads lies and confusion! I find comfort in knowing I will meet my loved ones in the hereafter and that my life will not be in vain. You cannot say the same. You do not have anything to look forward to, you fool!

R: Ah, but I am not the one who is afraid to not believe! I’m passionate about life and what I do. Why, my wife has to interrupt me, reminding me to “eat something.” What comes through to me is this: your feelings are all that matters. And I sense it’s more about what you want to feel. What you tell me are promises of others repeating promises of those before them. Human beings, like all sensate organisms, fear death and will fight or flee to survive, but the human fear of death has been turned inside out through sanctified denial. Eternal life is an oxymoron easily manipulated by those who know your hopes and fears. (By the way, you never answered my original question.) For the record: I find it astounding how much constant denial of reality you need to keep your bonfire of ignorance burning. Well, goodbye. 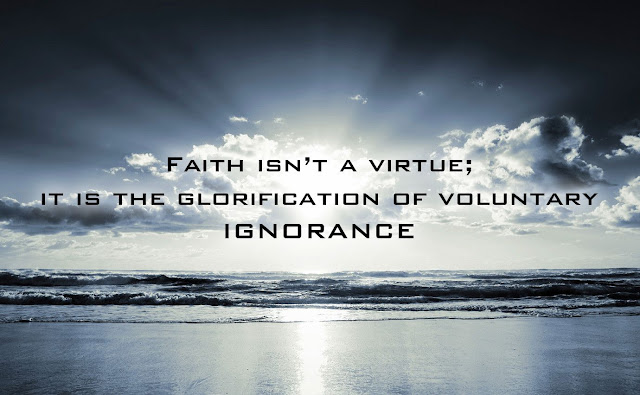 Head to Head – Dawkins on religion: Is religion good or evil?