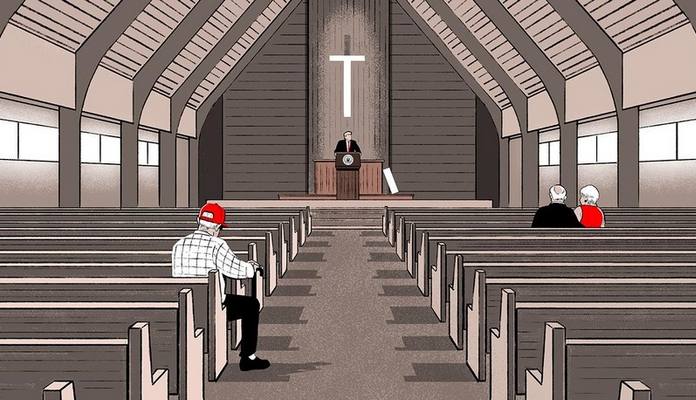 We know now that the core of Trump’s voter base is the white evangelical demographic, and we know the issues with it: the main underlying drive of fear, the us-vs.-them mentality, the easy brainwashing due to being conditioned from childhood to mindlessly obey authority and believe lies, the anti-intellectualism, the false worldview generated from the pulpit and from the right-wing noise machine, the sexism, racism and many other bigotries, the authoritarianism, the “prosperity gospel” worship of wealth and the wealthy, the opposition to equality, freedom and democracy. They’re even talking about Trump being a God-sent king, so perhaps we have to add embrace of criminality, treason and sexual predation.

But it appears the numbers of white evangelicals are dwindling enough that they might become irrelevant as a political force as soon as 2024, and direct opposition to their toxic worldview is being led by an increasingly strong and vocal movement of their own disaffected youth: the Exvangelicals.

One of these demographers is Robert Jones, who heads up the Public Religion Research Institute (PRRI) and published a book in 2017 entitled The End of White Christian America. Jones, Burleigh writes,

…has tracked what he calls a “stair-steps downward trajectory of white Christian presence in the electorate.” In 1992, when Bill Clinton was elected, 73 percent of the electorate was white and Christian. By 2012, that number was 53 percent. “If current trends hold steady, 2024 will be a watershed year—the first American election in which white Christian voters do not constitute a majority of voters.”

See the Dem side of the new House of Representatives? That’s the long-term future of American politics.

While the older cohort of the Christian Right is aging and dying out, the younger is abandoning it due to being fed up with hypocrisy and bigotry. Burleigh, as well as providing an overview of Christian Right history, presents the stories of three young men who are now leaders in the Exvangelical movement: Blake Chastain, whose podcast “Exvangelical” gave the movement its name, felt his church’s support of the Iraq War conflicted with biblical teachings. Jason Desautels left his after his preacher mis-blamed the Oklahoma City bombing on Muslims and didn’t apologize when the truth came out. Alex Camire left his church after his mother was demonized by his pastor for her alcoholism and his horizons were broadened by a secular education; his pastor’s endorsement of Trump sealed the deal, exemplifying Burleigh’s point that the Trump phenomenon, while it did not start the Exvangelical exodus, certainly hastened it.

Consider this as a two-birds-with-one-stone best-case scenario: Trump ultimately destroys both the GOP and the Christian Right’s already-weakening political clout.

Another Exvangelical leader, Christopher Stroop, calls 2018 “the Year of the Exvangelical” and identifies five key crucial events/factors of last year in a Dec. 26 article in Rewire.News.

Stroop concurs with Burleigh that Trump’s election was a “flashpoint and catalyst” for the unification and activation of the Exvangelical movement, many of whose members, he notes, are survivors of religious trauma (link provided by Stroop). “Because the exvangelical community consists of those who repudiate evangelicalism for its pervasive authoritarianism, we also tend to affirm that which most white evangelicals—a literally uniquely conservative, uniquely pro-Trump, and nativist demographic—stand against… feminism, intersectionality, racial justice, and LGBTQ rights.”

A thought of my own about the timing of the exvangelical phenomenon: part of the evangelical strategy for raising docile, pliable members is—as with any cult—isolation from the outside world and its information. Religious home-schooling, Christian camps and Christian colleges provide a cradle-to-adulthood indoctrination pathway. However, it is simply not possible to isolate young people as they could 20 or 30 years ago. The whole world is accessible through a little device everyone under 30 constantly has in their hands. It’s no accident that Exvangelicals first connected online.

“We are past denial. People see the writing on the wall in terms of demographic change. And that is also why we see immigration taking over and becoming the flagship issue. That and a wall symbolize the resistance to this demographic change.”

See why the impossible wall is so important to Trump anyway? For all it started as a mnemonic, it is a potent symbol.

“I think we are somewhere between anger and bargaining. And in many ways, this shotgun marriage between Trump and white evangelicals happened under some duress and is a desperate bargain that you make at the end of life.”

And of course a raging, destructive, sociopathic chaos agent given the enormous powers of a US President is the perfect vehicle for thwarted-authoritarian anger.

Jones’s notion of Trump as a crazy desperate Hail Mary effort to maintain white/Christian/male/hetero supremacy in the face of unstoppable demographic forces—even at the price of selling America out to foreign enemies, destroying democracy and perhaps the nation itself—is the most plausible explanation of the Trump phenomenon I’ve ever encountered.

That Hail Mary will never work, however. So long as the Exvangelicals and other supporters of democracy, equality, freedom and realism who form the true moral majority of Americans don’t let it.

The Man Who Mobilized The Evangelical Vote | AJ+

What Is The Future Of Evangelicalism? | VICE on HBO (Bonus)