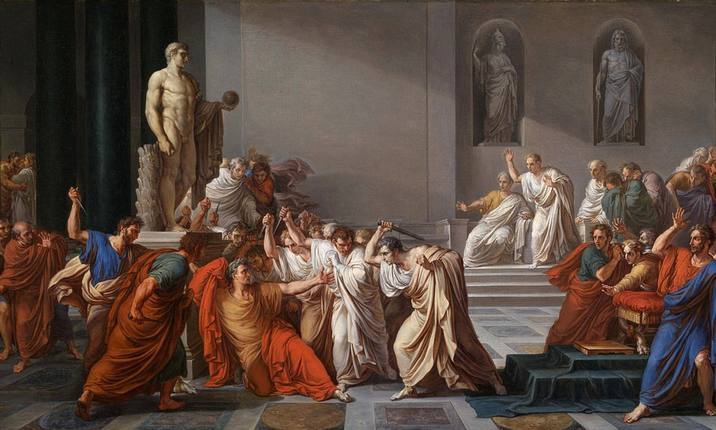 It’s March 15 and the Ides of March are upon us. It marks the Roman deadline for settling debts of all stripes, one which in 44 BCE became notorious, when Julius Caesar was assassinated, thus turning the world in another direction. On this day, I’m wondering if the world is at another turning point. If so how can I tell? And if it’s a turning point, in what direction should I be looking?

For decades I’ve been fascinated with why people come to believe in things. I’ve written about it, taught courses, and sweated out many decisions before more than one jury or judge over a client’s fate. Not only jurors and judges, but most of us work with what we see and hear, through our own eyes and ears, before coming to judgment. For things we don’t witness directly, we turn to secondary sources that have a measure of credibility, and when that fails us, we guess or capitulate to blind faith.

I assume most Americans have been glued to the TV over the past week hanging on every expert’s words about COVID-19. After hearing the nth authority repeat the same thing, I started scanning social media for what my “friends” were saying, and finally listened to a few TED talks, in this last case about viruses, as if that might make me smarter. It didn’t. When it comes to understanding where this is going, I simply don’t have the factual or scientific background to judge. And regrettably, in the absence of first hand facts, education and training, I’m left to trust or not, the government’s account, its actions and directives.

The more I listen to the White House press briefings, the less safe I feel. Laying awake last night, I tried to figure out why. Bottom line: I’m in the dark. I’m unsettled about whether it will affect my family or someone I know, where it will lead in the public sphere, maybe to a dystopian-like panic, or something out of a 1950s Rod Serling episode, where old people padlock their doors, or where store shelves empty as shoppers wrest the last onion from the bottom of the barrel. Notice that my concern is inner directed. My lack of knowledge about where the storm’s headed energizes my survival instinct—not a good place to be.

Governments are expected to shore up defenses, far enough in advance of the actual threats, especially to health, safety and welfare. If the threat has the potential to devastate a goodly number of its citizenry, certainly its most vulnerable, it has an imperative to act. The Trump administration has failed miserably to anticipate the magnitude of the pandemic. It now plays catch-up.

Not to belabor the point, but here’s how the administration has missed the mark. (1) It was warned early that the virus existed and could affect the U.S. In September, 2019, it learned that COVID-19 infections of Taiwanese residents originated from Hawaii. Then, in January, 2020, at the World Economic Forum in Davos, Switzerland, in a question about the virus, President Trump responded that he was not worried that the outbreak could turn into a pandemic, and that he was confident that China was being transparent. (2) The CDC failed to insure the availability of reliable tests to assess who had the virus, its rate of contagion, and its whereabouts. CDC test kits that were recalled after they proved defective. (3) The FDA meanwhile required an “emergency use authorization” for labs to only allow testing patients, who recently traveled to Wuhan, China, or had contacted a victim having a confirmed exposure to the virus. (4) We learn now that the government had not insured an adequate medical infrastructure: space, beds, gowns, masks, ventilators, and personnel. Combined, we have a calamity far in excess of the Katrina debacle.

Government’s most prominent strategy has been to get its citizens to wash their hands and reduce person-to-person contact. Laudable, but not reassuring. Every day seems to bring enhanced measures to close down, in a daily succession of edicts: sporting, entertainment events, gatherings of more than some changing amount, schools, restaurants, bars, and on and on, ad seriatim. Obviously these steps, some from the federal government, others from states, cities and associations reflect disorganization and undeveloped plans.

In times like these, when each of us faces the possibility of becoming the x-thousandth victim of COVID-19, it’s essential that our institutions use information based on science, not what a politician feels the people want to hear, or how they want the story to unfold, for instance reflective of the president drawing a line on a map to falsify a hurricane’s path.

When listening to leaders, we hope that they are telling us what scientists in their inner-circle are telling them. But, that’s a big assumption. We see how Mr. Trump guards the hen house, making sure that no one gets too far ahead of how he wants the story to unfold. Is this someone we should place our faith that everything is under control?

Important decisions should not be driven by emotions, faith, rules of thumb, guesses, intuition, gut reaction, or inflected by prejudice, bias, self-interest, or claims of prescience. Important decisions must be thought through. But, even if we are acting rationally, we might still fail in getting to the right decision, because we don’t have enough facts, or there’s been an over generalization, or we know less than we are willing to admit, but decide anyway—in spite of the decision being one of significance, sometimes even touching upon life and death.

It may be the data is not there, or the kind of information relied on can’t be quantified (such is often the case in life). In this case our leaders may be involved in an exercise in subjective probability, one where uncertainty plays a significant role. But this is awfully risky, as the following study revealed.

In 1975, a researcher surveyed over 1,200 people, in a study to determine how well the subjects estimated dates, values, and quantities about which they had some passing acquaintance, but were not certain, because they were not “expert,” much like the political class that run our government. The conclusion reached was that the ability to assess uncertainty was considerably unreliable: (a) more than a third of the participants had no idea how to describe uncertainty; (b) those uncertain about answers had no idea relative to their degree of uncertainty, that is could not distinguish between a 30% and 98% confidence interval; (c) there had been a universal tendency to overstate the accuracy of their own knowledge.

Why the government bungled management of the COVID-19 outbreak thus far will someday consume congressional committees that investigate incompetency. But at the moment, we know this: if the administration does not have all the facts as to rates of contagion increase, or the ability of the medical community to adequately respond, if the rate does not sufficiently flatten the infection curve, or that because of sequestering that four weeks from now there might not be enough food on grocery shelves, then individually we are reduced to planning on the basis of mere guesses, and may later discover that our government’s estimate was far from where the storm actually headed. Bad decision making has consequences.

I’m afraid that unless we begin getting a much clearer picture of what is in store, we will remain unable to responsibly chart where we are headed, not only as a community, but as individuals. On this Ides of March, does the world face a turning point? And, if so, in what direction are we heading?

"A Road Once Traveled: Life From All Sides" by Joe Carvalko. https://t.co/WbswR4bBK6 pic.twitter.com/DZxaSQKQ5P

Religion has to be subjected to criticism

The attempt to argue that the evil sides of religion are simply “not religious” is not convincing. Religion has to be subjected to criticism.

The Bible on Apostasy

Why Are “Moderates” so Reluctant to Criticize Religion?

How to Discover a Relationship between Religion and Violence

Faith and Ethics: The Story of Jephtha

What Judaism, Christendom, and Islam Have in Common: Theism

EXCERPTS FROM THE SECULAR OUTLOOK