I was raised in an evangelical home. My family were instrumental in creating the religious right. I was my father’s nepotistic sidekick out on the road for many years in the seventies and eighties until I fled the religious right for what I would regard as a more science-based, reality check kind of life, where I no longer believe in “biblical truth.”

But some of that biblical literacy stuck with me. There’s a verse in the New Testament which tells us that Jesus said that, in terms of belief in God, though one came back from the dead, some would not believe, in the context of someone warning those who were alive, about something that is happening, of great import, where they are denying the truth.

As I look at the Coronavirus, and what is going on globally – I am not a scientist or an expert, and I don’t want to offer any opinions on the disease itself, but there is an aspect of this that strikes me, very forcefully, because of the evangelical background that I come from that denied science, that denied the truth, including the denial of Climate Change being man-made.

And of course this is something that Donald Trump has carried on, in breaking our relationships with other countries, trying to team up to do something about Climate Change, and the degraded environment. We’re paying a price for his defunding of science programs and preventative programs that would be helping us right now to deal with this pandemic.

We’re paying a price that he has so alienated the leadership around the world that the only friends America seems to have are dictators and strongmen, not people that we traditionally have relationships with, in Africa, in Europe and other places.

The reason I bring this up is because, to me, the Coronavirus represents an almost prophetic and symbolic turn of events that feels as if it’s lifted directly from scripture, but in this case, it’s not God warning us, it is Mother Earth. It is nature. Our planet.

This is not just a warning that we are being sent by nature, it is in a way payback. The earth is fighting back. Think about the fires in Australia, or rising tides, or the fact that cities like Miami are going to disappear entirely within the lifetimes of the younger who may be watching this video.

Look at the settlement patterns of Australia, which are very similar to the ones we had in America, where white Europeans arrived and slaughtered the native population that had lived in harmony with their environment for more than 10,000 years, and now that country has experienced a series of cataclysmic fires, that should warn us all, but apparently did not. It doesn’t change policy anywhere on the environment.

“Though one returned from the dead, they would not listen.”

But now the Coronavirus has arrived, and here’s a strange thing; the Coronavirus has done in a couple of weeks what all our climate science has been advocating for us to do for more than 30 years. Flights are cut. Frivolous use of carbon fuels for cruises and pleasure-craft have been discontinued. Massive sporting events that require travel using internal combustion engines are closed.

Our immediate priority is to prevent the spread of #COVID19. In the long-term, important to tackle habitat and #biodiversity loss.

Never before have so many opportunities existed for pathogens to pass from animals to people. #ForPeopleForPlanethttps://t.co/xG4qicCvtZ

The Coronavirus has done more for our environment in two weeks than we’ve managed to do with our lack of attention span; though one returned from the dead, not yet believing.

So I have a question for every American right now as we face this coming election, and we look at the difference between the presumptive Democratic nominee Joe Biden and Donald Trump. Trump is a lifelong con-artist. Trump is a disbeliever in science and only a believer in himself. Trump was voted into office by the same White Evangelical electorate that has stymied every single step towards climate science and doing something about the environmental destruction we have around us.

The choice is not simply whether we believe science and fund research and have good relationships with other countries as Joe Biden would bring us back to. The choice, obviously, comes down to matters of actual survival. Not for some future generation where the tides are higher, or Miami is flooded, or lower Manhattan goes underwater, or Boston disappears. Not when the rest of Australia burns until the rest of the cities are unlivable. But right now.

Though One Come Back From The Dead, They Would Not Believe Him.

We did not believe the signs around us, of climate change and environmental destruction. Now, airlines are going broke. Cruise ships are canceled. We’re going to be driving less. Our huge, useless, stupid sport events that bring millions of people driving their cars for no other reason than frivolous entertainment are done for a while. We are going to watch elderly and vulnerable people die by the score.

And that doesn’t even get into health care, and the fact that this president has tried to undo everything Barack Obama did, from associations with other countries, for just such a time as this, to trying to deconstruct Obamacare and stop EVERY advance in providing health care for more people. We talk about forgiving student loans, but those students are at home because their universities are shut. We talk about child care, and now single moms with low paying jobs are going to have no option when they have to self isolate and their children have no school to go to.

The social policies of the Republican Party have been a drip of slow destruction on this country, but now we have a magnifying glass to see all of this through, and I’ll tell you what links it up: It’s a denial of science and fact by superstitious white evangelicals here in America, a Chinese culture that puts faith in folk medicine instead of science, and this is combined to release a force that we are not going to necessarily be able to deal with, and that is, Nature Herself, and SHE. IS. PISSED. OFF.

It is time to repent and fight not just for our own lives in this battle, but for our planet.

Frank Schaeffer is a New York Times bestselling author of more than a dozen books, including “Why I am an Atheist Who Believes in God” and “Letter to Lucy: A Manifesto of Creative Redemption — In the Age of Trump, Fascism and Lies”, an Interactive, Multi-Touch Book available exclusively on Apple Books and Kindle Fire. He has been a frequent guest on the Rachel Maddow Show on NBC, has appeared on Oprah, been interviewed by Terri Gross on NPR’s Fresh Air and appeared on the Today Show, BBC News and many other media outlets. He is a much sought after speaker and has lectured at a wide range of venues from Harvard’s Kennedy School to the Hammer Museum/UCLA, Princeton University, Riverside Church Cathedral, DePaul University and the Kansas City Public Library.

I am so excited! My book Letter to Lucy: A Manifesto of Creative Redemption—In the Age of Trump, Fascism and Lies, is now available on Kindle Fire as well as iBooks! I'd love for you to check it out!

Coronavirus Is Helping the Environment — for Now 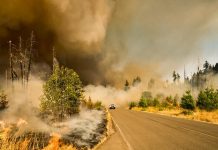