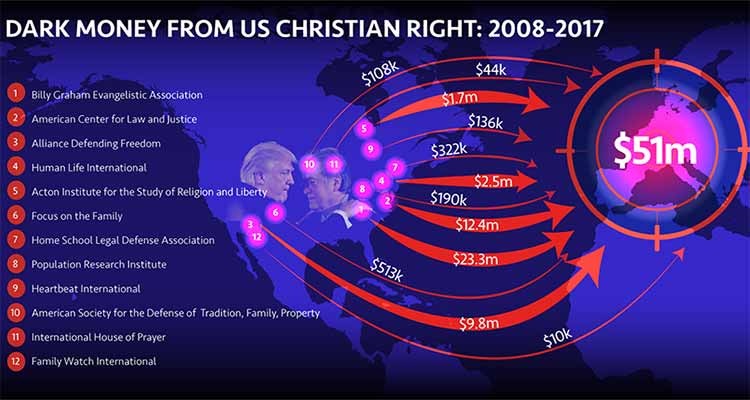 US Christian right fundamentalists linked to the Trump administration are among a dozen American groups that have poured at least $50 million of ‘dark money’ into Europe over the last decade, openDemocracy has revealed.

Between them, these groups have backed ‘armies’ of ultra-conservative lawyers and political activists, as well as ‘family values’ campaigns against LGBT rights, sex education and abortion – and a number appear to have increasing links with Europe’s far right.

They are spending money on a scale “not previously imagined”, according to lawmakers and human rights advocates, who have called our findings “shocking”. Reacting to openDemocracy’s findings, a cross-party group of more than 40 MEPs has called on the EU’s transparency tsar Frans Timmermans to look into the influence of “US Christian fundamentalists… with the greatest urgency” ahead of May’s European Parliament elections.

Among the biggest spenders is a group whose chief counsel is also Donald Trump’s personal lawyer, Jay Sekulow. Another organisation has collaborated with a controversial Rome-based ‘institute’ backed by Steve Bannon. And a number of the groups are connected to the World Congress of Families: a network of ultra-conservative activists which has links to far-right politicians and movements in several European countries, including Italy, Hungary, Poland, Spain and Serbia.

OpenDemocracy has examined a decade of US Christian organisations’ financial accounts and found that several of them appear to have significantly increased their spending in Europe over the past five years.

But the extent of their European activity has – until now – received little scrutiny. Our investigation reveals that some of these groups have:

Two of the Trump-linked American groups examined by openDemocracy are Christian right legal powerhouses Alliance Defending Freedom (ADF) and the American Center for Law and Justice. Together, they have spent more than $20 million in Europe since 2008.

Caroline Hickson, regional director of the International Planned Parenthood Federation’s European Network, said: “The scale of this meddling by US extremists is shocking, but sadly no surprise to us. Every day European societies face concerted attacks by outside forces seeking to impose reproductive coercion… This is utterly at odds with the European values of democracy and human rights.”

“This is dark money coming into Europe to threaten human rights, and we’re not doing anything about it”, warned Neil Datta, secretary of the European Parliamentary Forum on Population and Development, describing the amounts of money involved as “staggering”.

“It took the Christian right 30 years to get to where they are now in the White House,” he said. “We knew a similar effort was happening in Europe, but this should be a wake-up call that this is happening even faster and on a grander scale than many experts could have ever imagined.”

Dark money flowing into Europe: where does it come from?