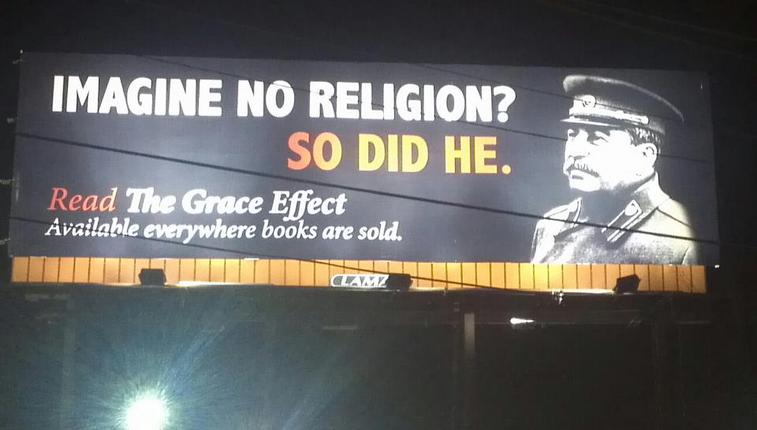 It probably comes as no surprise to most American Atheists that Atheists rank even lower than Muslims in the American Christian demonology. 43% of Americans would not vote for an Atheist for president against 40% for a Muslim, 30% for a homosexual, 18% for a mormon with Latinos, Jews, Catholics, Women and African Americans getting 7%, 6%, 5%, 5% and 4% respectively. Incidentally, that 43% figure is close to the percentage of American adults who believe Noah’s Ark was a historical event and that humans were created by magic out of dust and ribs.

Institutionalised ‘Secularphobia’ is normal in the USA with people giving a lower priority to an Atheist or agnostics waiting for a kidney transplant than for believers and Atheists are much less successful in custody battles after a divorce that religious parents. In addition, despite the First Amendment which guarantees freedom from religion as well as freedom of religion, it is illegal for an Atheist to hold public office in seven states. Atheists are barred from membership of the Boy Scouts, the American Legion, and the Veterans of Foreign Wars and Humanist chaplains are barred from serving in the US military.

Phil Zuckerman, Ph.D. lists 4 main causes of this American secularphobia, which are worth examining in some detail:

❶ Americans equate a lack of religiosity in general – or atheism specifically – with immorality. It seems to be a characteristic of American Christians that they can’t imagine any reason for doing the right thing and not the wrong thing if there is no promise of a reward or a threat of punishment involved. Yet one of their commandments specifically requires them to use their innate empathy – the Golden Rule, a characteristic of almost all human societies – allegedly ordered by Jesus in the Sermon on the mount:

Therefore all things whatsoever ye would that men should do to you: do ye even so to them: for this is the law and the prophets

Obviously, this only works if people can put themselves in the place of others in the specific context of the situation. Hence, no handbook is required, only the innate human empathy that the author of Matthew assumed everyone would have.

Similarly, the parable of the Good Samaritan, while showing that you don’t need to be Christian to be good, depends on the audience understanding why what he did was the right thing to do. It was allegedly told in response to a disciple asking Jesus “Who is my neighbour?” Jesus concludes the parable by explaining that anyone in need is thy neighbour. How do we assess our neighbour’s needs without empathy?

It’s rather strange therefore, that American Christians assume Atheists won’t have this innate ability that Jesus allegedly seemed to think we would have.

❷ Americans equate a lack of religiosity in general – or atheism specifically – with being un-American and/or unpatriotic. This flies in the face of any objective reading of American history where the “Founding Fathers” specifically and explicitly set up a wall of separation between religion and the governance of the USA.

And it’s a rather judgmental view of their god to assume he is specific to America and requires special loyalty of Americans to one nation out of all those on Earth. It also runs counter to St Paul’s instruction to the Romans to be loyal to the government as all governments are ordained by God. There is of course, no reason at all why an Atheist should not be loyal to America or indeed why a theist should be unless they chose to be. Certainly America gets no hint of a mention in the Bible and has a democracy which has no counterpart in the Bible in which all governments including the government of the church, is rigidly hierarchical and dictatorial with the people never having a say in the affairs of state at any point. ‘Justice’ in the Bible is peremptory with no right of appeal and sentences are often draconian and excessive. There is no such thing as trial by jury, the right of appeal or the writ of habeas corpus. No vote, no elections, no accountability to the people. Nothing! The very antithesis of the ‘shining beacon on the hill’ that was American democracy.

And yet, to Americans, one needs to believe in the Bible and all it stands for, to be a patriotic American!

Study of Atheists in US published.
A new very comprehensive survey of american atheists has been published. It grants a fasinating insight into non-religious america and highlights the discrimination against the non-religious. https://t.co/x1uYqZ12sd

❸ There is no stigma concerning the expressed dislike of the non-religious. While there is a stigma (to varying degrees, depending on one’s social milieu) attached to being racist, or anti-Semitic, or Islamophobic, or homophobic – there has never existed a social or cultural backlash against people who openly express disdain for secular folks. So people simply feel much more comfortable expressing their dislike for atheists than, say, Latinas/os or women.

In other words, there is no social pressure on theists to not be secularphobic, so they are free to hate away and can even expect to be admired for it as somehow patriotic. Religion provides the perfect excuse to hate, victimise and demonise someone you’ve never even met, while posing as their moral superior.

❹ Insecurity on the part of the religious. Faith – believing claims without sufficient evidence, or claiming to know things that you don’t or can’t know – is an increasingly shaky endeavor. And in order for religious faith to survive, it requires a lot of social support: the more people who share it, the easier it is to maintain and reproduce. Thus, anyone who rejects the tenets of your faith, or calls them in to question, is a threat. Atheists lack a faith in God, and thus theists are particularly threatened by the growing presence of such humans, as they call into question the very thing that is ever so shaky to begin with: religious faith.

This is consistent with the 2015 finding by Cook, Cohen and Solomon that atheism is an existential threat to theists because it confronts them with the possibility of being wrong and having all their religiosity rendered pointless and all their hopes for an afterlife undermined and replaced with the probability of oblivion and a life with no more meaning save what you give to it and no ultimate purpose.

With their fragile, evidence-free beliefs, this is a terrifying prospect, especially for fundamentalists, who try to manage that terror by minimising and dehumanising the Atheists who constantly remind them of the shaky foundations of their faith. And yet these people have been conditioned to be terrified of a mind-reading sky man who has a special horror ready for anyone with even so much as a hint of a doubt!

A common response of the impotent to an object of terror is to abuse it and denigrate it and otherwise try to reduce its status as an ever-present existential threat – and hopefully to appease the mind-reading sky man in the process. If theists really believed Atheism is wrong, they would tell the truth about it, produce the evidence that proves it and refute it calmly and rationally. Instead, it is greeted with lies, abuse and false accusations that are mentioned above.

And all because they are too afraid to face up to the fundamental questions that Atheism raises.

Nine years ago now I wrote a post (“Do You Want To Convert An Atheist“) in which I explained the simple steps needed to convert an Atheist and challenged any theist to attempt it. To date, no theist has ever managed it.

Americans don’t so much believe in the God, as believe in believing in God. As someone said, and I forget who, Americans believe the Bible is a book which should be followed to the letter – by everyone else.

Not Atheist, Because “Atheism Is Too Close To Communism” | Michael-PA | The Atheist Experience 24.26