This article was originally published in the World Economic Forum and written by Ellen Stofan, PhD.

In “The Martian,” one of the hit films of 2015, NASA heroically saves a stranded astronaut with a little help from international partners and a lot of human ingenuity. Directed by Ridley Scott, the movie is visually beautiful, and provides nail-biting entertainment. But it also highlights what humans can accomplish when we put our minds to it, and – like Stanley Kubrick’s 1968 masterpiece, “2001: A Space Odyssey” – it offers a glimpse into what the future of space exploration could look like.

NASA provided some technical guidance during the production of the movie, and many of the scenes showcased technologies that we are working on today – from advanced spacesuits to methods for growing food in space. These technologies could one day be used to explore Mars in real life.

NASA has set the ambitious goal of sending humans to Mars by the mid-2030s. In a recently released report, “NASA’s Journey to Mars: Pioneering Next Steps in Space Exploration,” we outline what humankind must do to get there. The steps include continued research on the International Space Station (ISS), and then moving humans beyond low Earth orbit to what we call “the proving ground” – the region of space near the moon. This will allow us to push the limits of our capabilities in a place from which astronauts can safely return home in a few days.

There is one thing “The Martian” got wrong. Unlike in the film – not to mention NASA’s real-life exploration of the moon – human exploration of Mars will not be a NASA-dominated endeavor. On the contrary, people and resources from around the world will contribute to preparations to send humans to Mars, and the journey itself will be pursued in partnership with other countries’ space agencies and with the help of the private sector.

Already, agencies from around the world are working together to expand our knowledge of space and the solar system. Tens of thousands of people from 15 countries have been involved in developing and operating the ISS. In addition to developing the technology needed to explore our solar system, we are carrying out critical research on how to keep humans healthy in space for long periods of time, while mitigating health risks such as loss of bone density and muscle atrophy.

In collaboration with the international community, NASA continues to explore Mars robotically with numerous spacecraft. Five countries have contributed instruments aboard NASA’s Mars Science Laboratory Curiosity rover, including a weather monitoring station built by Centro de Astrobiologia in Spain. These efforts will reduce the risks of landing humans on Mars by providing a better understanding of the planet’s environment and what resources it might provide to future explorers. The European Space Agency is providing the service module for NASA’s Orion spacecraft – the vehicle that will carry astronauts beyond the moon for the first time since the Apollo program.

Private companies are also doing their part. SpaceX and Orbital ATK already transport supplies to the ISS as part of NASA’s commercial cargo program, and Boeing and SpaceX plan to start launching astronauts in 2018. We are also testing new technologies with private companies on the ISS, such as 3D printers that could make space exploration more sustainable.

We are not pursuing a human journey to Mars just because we can. We are doing it because what we learn about the planet will tell us more about life on Earth.

From a scientific perspective, we believe that Mars is the most likely place to find evidence of life beyond Earth. Water, which is critical to life, was stable on the surface of Mars for about a billion years. Based on what we know about evolution on Earth, life is likely to have arisen on Mars as well.

@NASA has launched its #Mars rover, Perseverance, to seek signs of ancient life on the Red planet. The fly-along helicopter buddy will land in February 2021 and is the first #space mission of its kind via @SPACEdotcom https://t.co/oR56g2B1tM

However, because Martian life forms – if there are any – may not have evolved beyond the microbial level, we will likely need to put astrobiologists and geologists on the surface of Mars in order to find evidence of them. Recent evidence of liquid water on the surface of Mars also makes scientists wonder if life could have persisted, moving underground as surface conditions became increasingly inhospitable.

There are also reasons for visiting Mars that transcend the purely scientific. Sending humans to Mars is a challenge that will spark innovation and the development of new technologies and capabilities. It has been estimated that every dollar spent at NASA adds about four dollars to the American economy. As President John F. Kennedy once said, we don’t do things like putting a man on the moon “because they are easy, but because they are hard, because that goal will serve to organize and measure the best of our energies and skills.”

These efforts have real benefits for life on Earth. Indeed, many of the recent technologies developed for space already have practical applications on Earth. The water purification system used on the ISS is currently helping to provide clean water in remote regions. Work on NASA’s new Space Launch System and Orion capsule has led to faster ways to charge batteries, and to the development of advanced manufacturing techniques and lighter aircraft structures.

Just as steely astronaut Mark Watney explored Mars in “The Martian,” NASA is resolved to continue to lead an international effort to reach for new heights and learn the secrets of the Red Planet. In doing so, we will turn science fiction into science fact.

Ellen Stofan is the John and Adrienne Mars Director of the National Air and Space Museum.

Are We Alone? | Ellen Stofan | TEDxBinghamtonUniversity

How Will SpaceX’s Starship Get to Mars and Back? 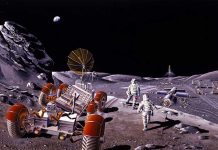