Editor’s note: George C. Denniston M.D., M.P.H. (Harvard), is President of Doctors Opposing Circumcision, an international organization with members on six continents. He cannot understand why Catholics and Mormons (he has been to their President with this question) do not protect their own against a practice that is only harmful to them, and has no religious significance. This is a brief essay by him to touch off! the discussion. 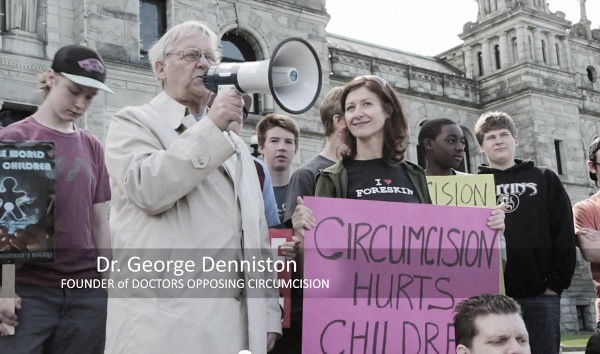 Circumcision has been around for a long time. We have recently reached a stage in human evolution where we are capable of recognizing it for what it is, and doing away with it.

Recently the District Court of Cologne, Germany declared in a landmark ruling that anyone who cuts boys foreskins for religious reasons is punishable for causing bodily injury. In its judgment, the Court made clear that neither the rights of the parents nor the freedom of religion guaranteed in Basic Law could justify this intervention.

At long last, a judicial entity has called a spade a spade. Circumcision is an assault on the individual, and no one, especially not a doctor, has the right to do this to another person. It constitutes a massive violation of the individual’s basic human rights. A doctor who performs a circumcision in Germany these days can be prosecuted.

Why do some individuals insist on doing this to other people? Leaving aside the religious commandment, there is another reason. Someone who has been deprived of half of the skin of his normal penis, with the 20,000 plus sensitive nerve endings, will never experience the joy of sex, as it was meant to be – in all mammals for the past 65 million years (all mammals have foreskins). So it should not be surprising to find a deep anger in many a victim. This anger often results in denial, which can manifest as a compulsion to circumcise, or to see to it that others are circumcised. When this tragic relationship generally becomes recognized, steps will be taken to prevent these compulsives from ruining the lives of so many others.

To help put this in perspective, lets compare a pedophile with a circumcising individual. Which is worse, a person who plays with a child’s penis, and harms him psychologically, or a person who tortures (by definition: torture is hurting another, whether intended or not), and permanently mutilates (again, by definition) another human being, and also harms him psychologically? We know how society reacts to a pedophile. How should it react to a circumciser? When the public fully recognizes what is going on, most will want to put an end to the tragic practice.

At this very moment, we are in the midst of the greatest scandal in American medical history. The Gates Foundation has given over One Billion dollars to circumcise some 600,000 African males, allegedly to prevent AIDS. Everyone knows that circumcision does not prevent AIDS. America has the highest rate of circumcision in the industrialized world, as well as the highest rate of AIDS. Most of these AIDS victims in America were already circumcised.

Circumcision plays no role in preventing AIDS. In fact, it will play a role in increasing the rate of AIDS in Africa. First there will be all the extra cases caused by dirty instruments during the surgery. At present about 30% of African AIDS is caused by doctors who fail to sterilize their instruments. Second, AIDS will increase because there will be less condom use. Men will believe the circumcision protects them, and they will no longer want to wear condoms because their sensitivity is now much decreased.

Even if circumcision were to be able to decrease AIDS by 60%, the claim made by the researchers, most everyone would still get AIDS eventually. So it is not an effective preventive. But the real indication of fraud is that the researchers cited relative risk, rather than absolute risk, which makes it seem so much more effective. The absolute risk was only about 1.3%. That might not have gotten them the money to carry out their nefarious scheme. So they cited relative risk at 60%. They wanted that money and they got it. This huge tragedy is a result of the compulsive nature of the victims, stopping at nothing to get others to suffer the same losses they suffered. When people begin to understand what is going on here, circumcision will no longer be tolerated.