Firoozeh Bazrafkan is frightened of nothing. Five foot tall, 31 years old, and so thin you think a puff of wind could blow her away, she still has the courage to be a truly radical artist and challenge those who might hurt her. She fights for women’s rights and intellectual freedom, and her background means her fight has to be directed against radical Islam. As a Danish citizen, she saw journalists go into hiding and mobs attack her country’s embassies just because Jyllands-Posten published cartoons of Muhammad that were so tame you could hardly call them ‘satirical’. Bazrafkan is also the daughter of an Iranian family, and the Islamic Republic’s subjugation of women revolts her.

When I met her, she was enduring a crash course in politically correct Europe’s many hypocrisies. White Danes reported her to the police for writing that Muslim men abuse and murder their daughters, and adding for good measure that the ‘Koran is more immoral, deplorable and crazy than manuals of the two other global religions combined’.

You could say that her remarks were offensive. You could say that the inattentive reader might just take them to mean that all Muslim men abuse and murder their daughters. But if every remark that someone might find offensive or misinterpret were banned, the human race would fall silent.

Liberal principles once held that the Danish state should only punish Bazrafkan if her words provoked violence. As it was, the court asked for no proof of actual incitement. (There was none to be had.) Instead, it acted as if criticism of religion — a system of beliefs which individuals should be free to choose and others should be free to criticise — was identical to racial prejudice, which all thinking people condemn because no one can choose his or her ethnicity. The white ‘liberal’ judges therefore ruled that the Iranian-born artist was a ‘racist’ and gave her a criminal record for condemning honour killings and clerical misogyny — proving yet again that the interests of women always come last.

When I asked what she thought of the Danish legal system, I did not receive a long lecture on freedom of expression.

So is the London art world. After she told the Danish court she would sooner go to prison than pay its 5,000 kroner (£550) fine, the indomitable Bazrafkan headed for Passion for Freedom. The annual exhibition is as close as London gets to underground art. That claim may surprise you. If you listen to artists, writers, academics and journalists, you would think that thousands of them operate in a radical underground. They say the right things. They ‘speak truth to power’, ‘transgress boundaries’, and all the rest of it. But you will have noticed that they are careful only to challenge religions that won’t hurt them (Christianity) and governments that won’t arrest them (democracies). The London-based Polish intellectuals who organise this artistic protest against abuses of human rights are braver. Passion for Freedom is not devoted to anti-Islamist art. But its curators are not frightened to show it either.

The exhibition was to open at London’s Unit 24 gallery, near Tate Modern, last Saturday. Unit 24, which boasts on its website that it is ‘fiercely independent’, pulled out with only days to go. In emails to the organisers, Unit 24 offered various justifications for wrecking a show that had taken months to arrange. ‘Enemies of the exhibition’ had made threats, and it was worried about a ‘potential terrorist attack’. Unit 24 told The Spectator it pulled the show because Passion for Freedom could not provide insurance and security.

There was no secret about its decision. But not one of the arts correspondents for the broadsheets or BBC covered the threat to an international exhibition featuring the work of dozens of artists. I have argued many times that censorship is at its most effective when no one admits it exists. The first step to freeing yourself from oppressive power is to find the courage to admit that you are afraid. The more people confess to being afraid, the less reason there is to fear and the easier it is to isolate repressive forces.

But the radical poses of western intellectuals make a frank discussion of fear impossible. For how can they say they are brave dissidents one minute, and confess they are scared of theocratic thugs the next? In 2007, Grayson Perry was an exception. He said he would damn Christianity in his art, but had ‘not gone all out attacking Islamism because I feel the real fear that someone will slit my throat’. By the time of his Reith lecture last week, Perry’s honesty had gone. On the subject of courage, he could only quip, ‘I think one of the most rebellious acts done by an artist recently was by Tracey Emin. She supported the Tories!’

Ha-bloody-ha. How the audience laughed. But Perry knew what he said was not true, and so in their hearts did the claque who applauded him.

Fortunately, the truly radical owners of the Embassy Tea Gallery allowed the rebellious show to take over their space in Southwark, where it will run until Friday. The large crowd on the opening night cheered Firoozeh Bazrafkan. Meanwhile, the judges decided that the best piece on display was ‘The Perfect Stone’ by Victoria Burgher. A smiling woman gave visitors stones as they entered. ‘Find where to put it,’ she said with a conspiratorial wink. Galleries pull stunts like this all the time. In this instance, however, visitors found that the stone went into a sack by a pillar. Above it was Article 104 of Iran’s Islamic Penal Code, which states with creepy precision that when a woman is stoned to death for adultery, ‘the stone shall not be so big so as to kill the person by one or two strikes, neither shall it be so small that it cannot be called a stone’.

I was one of the judges that gave Burgher the prize for her subtle protest against the Iran’s treatment of women. I suppose that means I am a racist too.

Nick Cohen is an English journalist, author and political commentator. He has written five books including, What’s Left? (2007) and You Can’t Read This Book (2012). The Orwell Prize for political writing shortlisted What’s Left? in 2008. 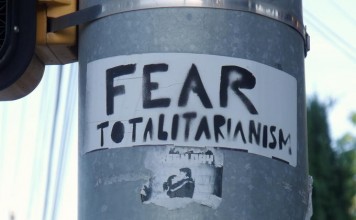