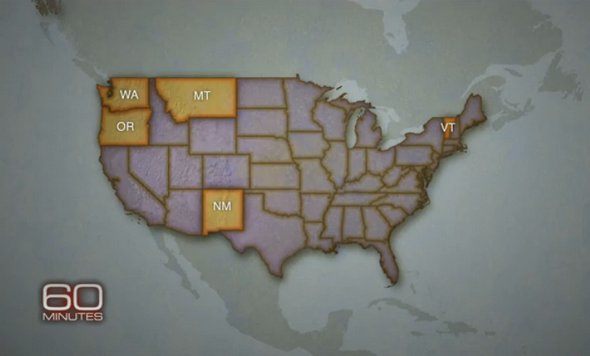 Hope you happened to watch the October 19 CBS 60 Minutes segment on Ending Life which tells about the horrendous miscarriages of justice in connection with the death of people who just happen to live in the wrong state. Go here and view this powerful piece directly:

I will only briefly cover the main incident depicted in this poignant drama in a moment. But, while often clothed in the confusing language of religious fervor or even misguided personal views of those in positions of authority, such behavior has no place in what are clearly secular choices which demand the maximum allowance for individual freedom.

First, however, let me note that this absolutely clear case for allowing those who wish to die carefully monitored dignified deaths was presented along with a contrary view from Ira Byock, MD, whose web site tells us that he “is a leading palliative care physician, author, and public advocate for improving care through the end of life.

“He serves as Chief Medical Officer for the Institute for Human Caring of Providence Health and Services, based in Torrance, CA. He advances efforts to measure, monitor and improve person-centered care system-wide. Dr. Byock is Professor of Medicine and Community & Family Medicine at the Geisel School of Medicine at Dartmouth. He served as Director of Palliative Medicine at Dartmouth-Hitchcock Medical Center in Lebanon, New Hampshire from 2003 through July 2013.

“Dr. Byock has written widely on the ethics and practice of palliative care and health care systems change. He is a consistent advocate for the voice and rights of patients and their families.”

This “voice and rights” statement hardly squares with what he said on 60 Minutes. CBS narrator Anderson Cooper told us that “Dr. Ira Byock is a Dartmouth professor and head of the Providence Health System’s Institute for Human Caring. He’s been nationally recognized for his efforts to provide terminally ill patients with better care. But he is strongly opposed to laws like Oregon’s.”

There’s certain things that people aren’t supposed to do to one another as absolutes. They are not okay. Doctors killing patients is not okay.

Anderson Cooper: But shouldn’t people have the ability to determine when their life is no longer worth living?

Dr. Ira Byock: You know, when a physician is involved in a suicide, it’s a social action. And if you want to look at the societies like Belgium and Netherlands, well, nowadays people who have just lost interest in living, or are clinically depressed, are being euthanized legally.

60 Minutes Segment: A doctor reflects on death and dignity

Guess I would have to say, Doctor, you are not the final arbiter of people’s lives, they are!

Byock is associated with Providence Health of So. California – a Roman Catholic Institution adhering to the Ethical and Religious Directives for End of Life Care set down by the US Conference of Catholic Bishops.

So he, like the RCC, wants to be a kind of contra Daddy Warbucks for us all. You know, telling women that they should never have an abortion or be sterilized or use modern contraception.

Unlike Warbucks, who comes to help Orphan Annie in a pinch, Byock knows best and the freedom of people to make these key decisions must be subverted to his doctrine (faith?) that he knows best. If this isn’t, like the RCC’s, the ultimate arrogance, I don’t know what is.

Later in the segment after the facts of one seminal miscarriage of justice against a Pennsylvania woman, her 93 year old father and their family are presented, Byock is again allowed to put his views forward.

But Dr. Byock, who reviewed Joe Yourshaw’s records at our request, questions whether Yourshaw would have needed a “death with dignity” law to end his life if he had simply received better end-of-life care from his hospice.

Dr. Ira Byock: If I was his family, I would have been livid.

Dr. Ira Byock: They were just doing the regulatory minimum for Mr. Yourshaw. And they weren’t really addressing his suffering to the extent it needed to be.”

Hospice records reveal Joe Yourshaw to have been a difficult patient, who at times refused to take any medication. But the records also show Yourshaw repeatedly told hospice workers that he suffered from “pain all over” and felt that “by living he is more of a burden to his family.”

Dr. Ira Byock: I think that this case is emblematic of how we are failing elders, chronically ill people, vulnerable people in America.

Dr. Ira Byock: In so many ways. We are, you know, not treating people’s suffering. We are making them feel undignified. Ask any boomer who’s cared for their parents. They’ll tell you that even for those of us who are doctors and nurses, it’s really, really hard to get the basics of care for your frail loved one met.

Anderson Cooper: Barbara Mancini would say, well, if Pennsylvania had the kind of laws that Oregon now has, which would have allowed her father to get some medicine that could have ended his life, whether he chose to use it or not, that would have at least given him a sense of peace.

Dr. Ira Byock: So what we’re saying to Mr. Yourshaw is, “We’re not going to treat your pain. We’re not going to train your doctors to counsel you. We’re going to basically ignore you. But don’t worry, because if the time comes when you’re feeling hopeless, we can write that lethal prescription. In what world is that a progressive, positive development?”

Hello, Doctor. Having had to deal personally with your “put them in the hospital where we can tube them up and pump them full of whatever so they can gasp and writhe and stay alive longer” program, you have made the case so eloquently for Compassion and Choices, which under its remarkable leader, Barbara Combs Lee, has sparked a successful but yet not finished continuing revolution in sane, dignified end of life treatment.

When, in 1992, my wife got the final bad news that her lung cancer would kill her, her MD came to our home and said, “Well, now you need to go to the hospital.” To which we both replied, “No.” She died at home shortly afterwards with excellent, brought in, hospice care to fully manage her pain.

In her case, Barbara Mancini watched her father drink a morphine overdose and when a hospice worker came to the house, she made a bad mistake. She told the worker what she had allowed him to do and the health worker called police who arrested her and initiated an extended legal process which persecuted Mancini, who got critical help from Compassion and Choices until she was finally exonerated, but not without huge personal trauma.

Her poor father was taken to a hospital, revived, intensely angry at being revived, and in pain. He died a short time later, rather starkly discrediting the testimony of the Anti Daddy Warbucks cited above.

Please watch the whole segment and then get out your checkbook and write a gift to Compassion and Choices.

This brings us swiftly and with certainty to what needs done here ASAP, namely, bringing the sensible, sensitive enforceable laws that prevail in Oregon and 3 other states to all 50 states.