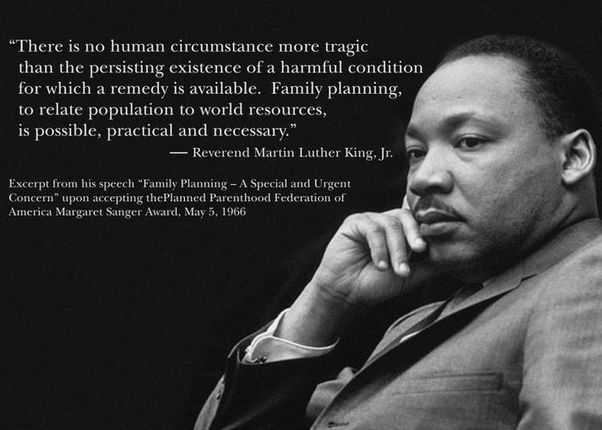 On January 18, 2016, there was a national holiday in the USA to honor the birth of Dr. Martin Luther King Jr. Joe Bish of Population Media published Dr. King’s May 5, 1966 speech given in connection with his being awarded the Margaret Sanger Award by Planned Parenthood. It expresses the concerns that this site has been publishing so urgently about population growth. World population in 1966 was 3.4 billion, which has since doubled to over 7 billion. Our beleaguered planet is adding 1 billion humans every 12 years.

Mr. Bish also included quotes from leading Americans on the need for population curbs, but the attacks from the Catholic Church which carefully crafted an attack on the US family planning program certainly contributed to the decline in US program effectiveness.

Listen to King’s words and those of the others and ponder where we are going! Our future is not a positive one based on our failure to override the anti-family planning forces. It has been nearly 50 years since this speech and 48 since his untimely assassination but his message gains urgency every year that passes.

Recently, the press has been filled with reports of sightings of flying saucers. While we need not give credence to these stories, they allow our imagination to speculate on how visitors from outer space would judge us. I am afraid they would be stupefied at our conduct. They would observe that for death planning we spend billions to create engines and strategies for war. They would also observe that we spend millions to prevent death by disease and other causes. Finally they would observe that we spend paltry sums for population planning, even though its spontaneous growth is an urgent threat to life on our planet. Our visitors from outer space could be forgiven if they reported home that our planet is inhabited by a race of insane men whose future is bleak and uncertain.

There is no human circumstance more tragic than the persisting existence of a harmful condition for which a remedy is readily available. Family planning, to relate population to world resources, is possible, practical and necessary. Unlike plagues of the dark ages or contemporary diseases we do not yet understand, the modern plague of overpopulation is soluble by means we have discovered and with resources we possess.

What is lacking is not sufficient knowledge of the solution but universal consciousness of the gravity of the problem and education of the billions who are its victims.

It is easier for a Negro to understand a social paradox because he has lived so long with evils that could be eradicated but were perpetuated by indifference or ignorance. The Negro finally had to devise unique methods to deal with his problem, and perhaps the measure of success he is realizing can be an inspiration to others coping with tenacious social problems.

In our struggle for equality we were confronted with the reality that many millions of people were essentially ignorant of our conditions or refused to face unpleasant truths. The hard-core bigot was merely one of our adversaries. The millions who were blind to our plight had to be compelled to face the social evil their indifference permitted to flourish.

After centuries of relative silence and enforced acceptance, we adapted a technique of exposing the problem by direct and dramatic methods. We had confidence that when we awakened the nation to the immorality and evil of inequality, there would be an upsurge of conscience followed by remedial action.

We knew that there were solutions and that the majority of the nation were ready for them. Yet we also knew that the existence of solutions would not automatically operate to alter conditions. We had to organize, not only arguments, but people in the millions for action. Finally we had to be prepared to accept all the consequences involved in dramatizing our grievances in the unique style we had devised.

There is a striking kinship between our movement and Margaret Sanger’s early efforts. She, like we, saw the horrifying conditions of ghetto life. Like we, she knew that all of society is poisoned by cancerous slums. Like we, she was a direct actionist – a nonviolent resister. She was willing to accept scorn and abuse until the truth she saw was revealed to the millions. At the turn of the century she went into the slums and set up a birth control clinic, and for this deed she went to jail because she was violating an unjust law. Yet the years have justified her actions. She launched a movement which is obeying a higher law to preserve human life under humane conditions. Margaret Sanger had to commit what was then called a crime in order to enrich humanity, and today we honor her courage and vision; for without them there would have been no beginning. Our sure beginning in the struggle for equality by nonviolent direct action may not have been so resolute without the tradition established by Margaret Sanger and people like her. Negroes have no mere academic nor ordinary interest in family planning. They have a special and urgent concern.

Recently the subject of Negro family life has received extensive attention. Unfortunately, studies have overemphasized the problem of the Negro male ego and almost entirely ignored the most serious element – Negro migration. During the past half century Negroes have migrated on a massive scale, transplanting millions from rural communities to crammed urban ghettoes. In their migration, as with all migrants, they carried with them the folkways of the countryside into an inhospitable city slum. The size of family that may have been appropriate and tolerable on a manually cultivated farm was carried over to the jammed streets of the ghetto. In all respects Negroes were atomized, neglected and discriminated against. Yet, the worst omission was the absence of institutions to acclimate them to their new environment. Margaret Sanger, who offered an important institutional remedy, was unfortunately ignored by social and political leaders in this period. In consequence, Negro folkways in family size persisted. The problem was compounded when unrestrained exploitation and discrimination accented the bewilderment of the newcomer, and high rates of illegitimacy and fragile family relationships resulted.

For the Negro, therefore, intelligent guides of family planning are a profoundly important ingredient in his quest for security and a decent life. There are mountainous obstacles still separating Negroes from a normal existence. Yet one element in stabilizing his life would be an understanding of and easy access to the means to develop a family related in size to his community environment and to the income potential he can command.

This is not to suggest that the Negro will solve all his problems through Planned Parenthood. His problems are far more complex, encompassing economic security, education, freedom from discrimination, decent housing and access to culture. Yet if family planning is sensible it can facilitate or at least not be an obstacle to the solution of the many profound problems that plague him.

The Negro constitutes half the poor of the nation. Like all poor, Negro and white, they have many unwanted children. This is a cruel evil they urgently need to control. There is scarcely anything more tragic in human life than a child who is not wanted. That which should be a blessing becomes a curse for parent and child. There is nothing inherent in the Negro mentality which creates this condition. Their poverty causes it. When Negroes have been able to ascend economically, statistics reveal they plan their families with even greater care than whites. Negroes of higher economic and educational status actually have fewer children than white families in the same circumstances.

Some commentators point out that with present birth rates it will not be long before Negroes are a majority in many of the major cities of the nation. As a consequence, they can be expected to take political control, and many people are apprehensive at this prospect. Negroes do not seek political control by this means. They seek only what they are entitled to and do not wish for domination purchased at the cost of human misery. Negroes were once bred by slave owners to be sold as merchandise. They do not welcome any solution which involves population breeding as a weapon. They are instinctively sympathetic to all who offer methods that will improve their lives and offer them fair opportunity to develop and advance as all other people in our society.

For these reasons we are natural allies of those who seek to inject any form of planning in our society that enriches life and guarantees the right to exist in freedom and dignity.

For these constructive movements we are prepared to give our energies and consistent support; because in the need for family planning, Negro and white have a common bond; and together we can and should unite our strength for the wise preservation, not of races in general, but of the one race we all constitute – the human race.

During the formative years of the World Health Organisation (WHO), broad consensus existed among United Nations member countries that overpopulation was a grave public health threat and would be a major cause of preventable death not too far in the future. One of the founding fathers of the WHO, the late Prof. Milton P. Siegel, who for 24 years was the Assistant Director-General of the organisation, speaks to our Chairman Dr. Stephen D. Mumford in 1992. He explains how the Vatican successfully stymied the incorporation of family planning and birth control into official WHO policy. This video is available for public viewing for the first time. Read the full transcript of the interview here. 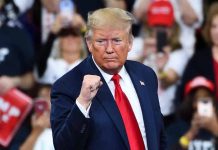