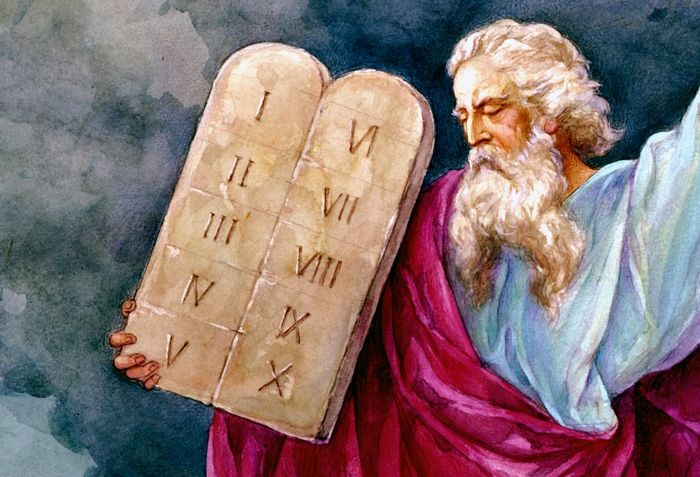 I’ve received a few messages over the last few days from conservatives professing that our Constitution, and in turn our laws, are derived from the Ten Commandments. I guess this is the argument conservatives are using to try to convince people that those commandments do indeed have a place on government property. I’ve heard this argument for years, and no matter how many times I hear it, it still never makes any sense.

But even going beyond that, many also claim that our laws are taken directly from Christian values and rules, with the Ten Commandments most commonly referenced as “proof.” When people say this, the first thing that goes through my mind is that they clearly don’t know all of the commandments – at least not correctly.

So I thought I’d provide a brief breakdown of each commandment to see just how many might pertain to our Constitution and/or our laws.

1. You shall have no other gods before Me.

Well, this one has absolutely nothing to do with our Constitution or our laws.

2. You shall not make idols.

This pertains to worshipping false idols other than the Christian God. But, again, it has absolutely nothing to do with our Constitution or our laws.

3. You shall not take the name of the LORD your God in vain.

We’re on #3 and still nothing to do with our Constitution or our laws.

4. Remember the Sabbath day, to keep it holy.

Once upon a time in certain areas of the country businesses weren’t legally allowed to be open on Sundays. Then they realized how economically ridiculous that was, those laws were then abandoned, and now any business that wants to be open on Sunday can be. Oh, but this still has nothing to do with our Constitution. As a matter of fact, laws forcing businesses to close on Sunday are flat-out unconstitutional.

5. Honor your father and your mother.

Hey, for the most part, this is a great commandment, though being respectful and honoring your parents isn’t exclusive to Christianity. In fact, in many cultures around the world, the parents have much more control over their children than they do in the United States. Besides, as with the first four, there’s absolutely nothing illegal about any child who disrespects their parent(s).

6. You shall not murder.

Finally the first commandment tied to an actual law – but “murder” is not something that’s exclusive to Christianity either. Pretty much in every culture and religion around the world, murder is seen as a crime. In fact, murder as a crime predates Christianity.

7. You shall not commit adultery.

While adultery is frowned upon, it’s not illegal. Sure, it’s grounds for divorce in many cases – but it’s not illegal. There’s absolutely nothing in our laws, or our Constitution, pertaining to the legality of adultery. If someone wants to cheat on a spouse, for the most part they’re free to do so without fear of any sort of legal recourse outside of potential divorce proceedings.

Ah, another actual law. But as with murder, stealing as a crime is not exclusive to Christianity. Many religious and societies around the world look negatively upon those who steal. Heck, in the Islamic country of Saudi Arabia you can have your hand(s) chopped off for stealing.

9. You shall not bear false witness against your neighbor.

While this could be tied into our judicial system, it basically amounts to “thou shall not lie.” Again, lying is frowned upon by many societies and religions. Outside of providing false testimony in a court of law, lying technically isn’t illegal either.

This one has been shortened over time. It used to include a list of things you weren’t supposed to “covet” such as your neighbor’s wife, donkey, his male servant (apparently the female ones were okay) or ox.

Once again, there’s nothing legal about this commandment that ties into our laws or our Constitution unless you want to claim that this is in reference to stealing. That wouldn’t make sense considering there’s already a commandment that references theft.

So, where is this “proof” that our Constitution and our laws are derived from these commandments? Sure, there are a few “moral codes” our society exemplifies that some could argue were taken from these commandments, but none of those are mutually exclusive to Christianity so that’s not even a rational argument.

Naturally, I’m sure none of this will make any difference to those who will continue to profess that this nation was founded on Christianity, and our laws are based off Christian principles, even if they can’t cite a single part of our Constitution to actually support these beliefs.