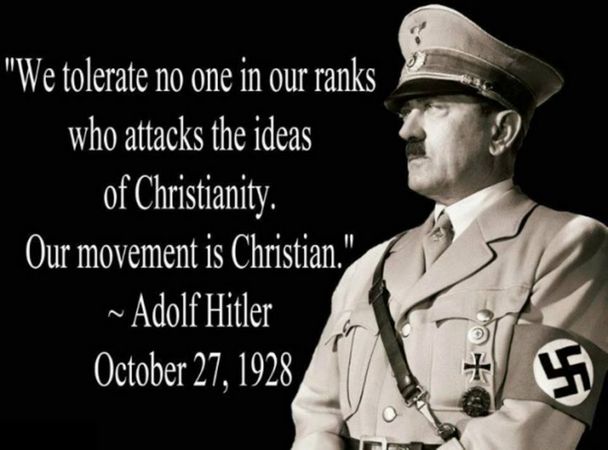 The most heinous butchery in human history—the Nazi Holocaust—wasn’t religious.

And yet it was.

For century after century after century, the Christian church had designated the people to be despised: the religious believers called Jews, the “Christ-killers,” the “enemies of God.” All the religious massacres of 900 years—by Crusaders pursuing infidels, by inquisitors hunting backsliders, by superstitious mobs fearing tales of child-sacrificing, host-nailing, and well-poisoning—branded Jews as accursed. When popes ordered Jews to wear badges and live in ghettos—or when they were expelled entirely—it told the populace that these pariahs were unfit to live among decent folk. Passion plays depicting Jews as cruel mockers of Christ, and cathedral paintings of the evil non-Christians, fanned hatred of those the church called “the perfidious Jews.”

Thus, when Adolf Hitler needed a scapegoat group to rally the discontented majority to his cause and catapult himself to power, natural victims clearly marked by the church were at his disposal. The Christian public, not only in Germany but also throughout Europe, was predisposed to receive the Nazi message of Jew-hatred.

“The Holocaust was, of course, the bitter fruit of long centuries of Christian teaching about the Jewish people,” wrote Dr. Franklin Littell, chairman of the religion department at Temple University. He urged study to “make it possible for persons of conscience to see where Christianity went wrong.”

New York Times editor A. M. Rosenthal asked how, in the name of God, the Nazi nightmare could have occurred among educated modern people. “In the name of God?” he said. “It could not have been done had not the name of God been used for centuries to preach hatred of the Other, the Jews.”

Theologian Clark Williamson of Christian Theological Seminary, Indianapolis, said centuries of Christian hostility to Jews “prepared the way for the Holocaust.” He said the Nazis “are inconceivable apart from this Christian tradition. Hitler’s pogrom, for all its distinctiveness, is the zenith of a long Christian heritage of teaching and practice against Jews.”

Grotesque-looking Jews were depicted as draining blood from innocent blonde children in this “blood libel” issue of the Nazi newspaper Der Stu’rmer in May, 1934. For Christians, he said, the Holocaust demonstrated “the demonic results and malevolent possibilities that reside in our tradition of anti-Jewish preaching and teaching.

“Christian anti-Judaism promoted the Nazi cause in several ways. It led the Nazis to focus initially on Jews and created attitudes which permitted them to carry out their extermination program with little resistance. It made it possible for Christians to justify either assisting or not opposing the Nazi efforts. Christian anti-Judaism is profoundly incriminated in the Final Solution.”

Theologian Richard Rubenstein wrote that the Nazis “did not invent a new villain…. They took over the 2,000-year-old Christian tradition of the Jew as villain…. The roots of the death camps must be sought in the mythic structure of Christianity…. Myths concerning the demonological role of the Jews have been operative in Christianity for centuries….”

Jesuit theologian Peter de Rosa, who quit the priesthood, lamented that Catholicism’s “disastrous theology had prepared the way for Hitler and his ‘final solution.’” He said his church published “over 100 anti-Semitic documents” through the centuries. “Not one conciliar decree, not one papal encyclical, bull, or pastoral directive suggests that Jesus’s command, ‘love your neighbor as yourself,’ applied to Jews.”

The bitter ex-Jesuit recounted in his 1988 book, Vicars of Christ: “Jews were hounded from one land to another. One pope gave them a month to quit their homes in Italy, leaving them only two places of refuge. During the Crusades, they were slaughtered in the thousands, out of devotion to Christ. A Jew who showed his nose on Good Friday was virtually committing suicide, even though the man on the cross had a Jewish nose….

“There is, tragically, an undeniable link between … the papal legislation, the pogroms—and the gas chambers and crematoria of the Nazi death camps.”

Researchers Paul Grosser and Edwin Halperin wrote: “If Nazi persecutions were not as ‘Christian’ as those perpetrated in the past, there was, certainly, an historic complicity. … By the time religious motivation and justification for anti-Semitism declined, the offshoots of that particular prejudice had already taken on a life of its own…. As a result, the Jews became the best-targeted prey for man’s propensity to slander….”

With the wrath of an Old Testament prophet, historian Dagobert Runes (whose mother was killed by the Nazis) blamed the Christian church for the Holocaust. He wrote:

“Everything Hitler did to the Jews, all the horrible, unspeakable misdeeds, had already been done to the smitten people before by the Christian churches…. The isolation of Jews into ghetto camps, the wearing of the yellow spot, the burning of Jewish books, and finally the burning of the people—Hitler learned it all from the church. However, the church burned Jewish women and children alive, while Hitler granted them a quicker death, choking them first with gas.”

“The clergymen don’t tell you whom to kill; they just tell you whom to hate,” he wrote. “The Christian clergymen start teaching their young at the tenderest age that THE Jews killed the beloved, gentle Son of God; that God Himself, the Father, punished THE Jews by dispersion and the burning of their holy city; that God holds THE Jews accursed forever….

“For all the 2,000 years, there was no act of war against the Jews in which the church didn’t play an intrinsic part. And wherever there was a trace of mercy, charity, or tolerance to be found amid this savagery, it came not from the church but from humanitarians in the civil world, as in Napoleonic France or during the American Revolution….

“Some fancy that these brutal outrages … occurred only in the Dark Ages, as if this were an excuse. Nay, when George Washington was president, Jewish people were burning on the spit in Mexico…. Wherever there are Christian churches there is anti-Semitism.”

When Nazism finally came, it was rooted in a fundamental fact: Religion had split Europe into a dominant majority and a vilified minority. Madmen rode this division to destruction.

Fifteen years after the ghastly contents of the death camps were revealed, reformer Pope John XXIII offered this prayer: “The mark of Cain is stamped upon our foreheads. Across the centuries, our brother Abel has lain in blood which we drew, and shed tears we caused by forgetting Thy love. Forgive us, Lord, for the curse we falsely attributed to their name as Jews.”